How Should We Understand the Fingers of God? 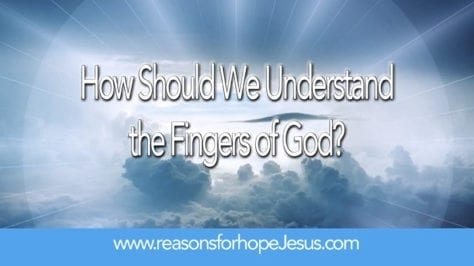 God the Father is an invisible spirit and has no physical body.  Yet the Bible refers to Him as having physical characteristics that theologians call Anthropormorphisms.  Even though He has no body, Scripture does speak of God’s eyes, ears, nose, arms, etc.  We’ve already covered the mind, face, eyes, ears, nose, voice, shoulder, back,arms, and hands of God.  Let’s now consider the fingers of God.

The words ‘finger’ or ‘fingers’ appear 40 times in the Bible, but only 9 of those speak of God.  In those mentions of His finger(s), we learn more about our awesome God.  Let’s see 4 main observations that the fingers of God reveal to us.

This verse recounts the third of 10 plagues God poured out on Egypt due to their Pharaoh’s unbelief and arrogant refusal to let the Israelites go.  The first two plagues, turning water into blood and frogs everywhere, were replicated by Pharaoh’s magicians.  But Pharoah’s magician could not replicate the third plague, when God turned dust into lice, and the whole land was filled with lice which infected all humans and animals. This was a miracle and Pharaoh’s magicians said,, “this is the finger of God.”

The God of the Bible is the King of kings, Lord of lords, and God of gods!  He is the Most High God, the only true God, and no one or nothing else even comes close!  Every time that Almighty God is contested, He wins!  God declared through the prophet Isaiah, “I am the Lord and there is no other; there is no God beside Me. . .I have made the earth and created man on it. . .a just God and a Savior, there is none besides Me. . .Look to Me and be saved, all you ends of the earth, for I am God and there is no other. . .that to Me, every knee shall bow, every tongue shall take an oath. . .”  (Isa 45:5, 12, 21-23)

King David wrote, “When I consider Your heavens, the work of Your fingers, the moon and the stars which You have ordained, what is man that You are mindful of him?” (Ps 8:3-4)  Though David was the most powerful king on earth at that time, he humbly acknowledged that God was the creator and sustainer of everything, and He is worthy of our worship, adoration, and complete trust.

Exodus 31:18 “And when He (God) had made an end of speaking with him on Mount Sinai, He gave Moses two tablets of the Testimony, tablets of stone, written with the finger of God”.

God gave us His inspired, inerrant Word  using different human authors, verbal dictation, visions, and prophetic utterances by holy men who spoke and wrote as they were moved by the Holy Spirit.  But when God was ready to reveal the 10 Commandments to His people, He had His servant, Moses, climb up to the top of Mt. Sinai and met with him personally. God wrote the 10 Commandments on two tablets of stone with His own finger.  There has never been a better, more concise, socially necessary, morally essential, and spiritually crucial set of standards anywhere, for any society, culture or nation.  These 10 rules will, if followed, will bring stability, civility, decency and harmony to any person, family, school or business, village or city, country or continent, and they are timeless.

Moses put the tablets into the Ark of God, which was kept in the Holy of Holies in the tabernacle and later in the Temple.  That tells us a lot about the preciousness of God’s Word, and how scripture has been treasured and valued by God’s people through the centuries.

Are you keeping the 10 Commandments?  Remember, they are the 10 commandments, not the 10 suggestions.  Even though they were given about 3500 years ago, they are still spiritually, morally, and socially relevant, and God expects them to be obeyed.

We  should cherish the Word of God, read it regularly, study it diligently, memorize it strategically, and share it reverently with others, because it comes from the very fingers, mind, heart, mouth and breath of God.  II Tim. 3:16-17.

Daniel 5:1-30 idemonstrates that our loving and merciful God is also capable of wrath and retribution.  Israel was in captivity in Babylon, and the pagan King Belshazzar held a party for kingdom officials and their wives.  All were drinking from the golden cups (taken from the holy temple in Jerusalem)  and praising their pagan gods, when…

“In the same hour the fingers of a man’s hand appeared and wrote opposite the lampstand on the plaster of the wall of the king’s palace; and the king saw the part of the hand that wrote…” (Daniel 5:5)

The king was then troubled and afraid and called on the wise men of Babylon to decipher the writing, but they could not.  In desperation, King Belshazzer called Daniel to give the interpretation.  Daniel   told the king of his haughty spirit and rebellious pride against the true God. He said, “You have lifted yourself up against the Lord of Heaven…you have brought the vessels of His house…have drunk wine from them…praised the gods of silver and gold…and the God who holds your breath in His hand and owns all your ways, you have not glorified.  Then the fingers of the hand were sent from Him, and this writing was written…God has numbered your kingdom and finished it…”   Scripture goes on to say… “That very night, Belshazzar, King of the Chaldeans was slain…”  In this dramatic scene, God’s fingers reveal His punishment for those who refuse to humble themselves under His mighty hand.

The Bible also reveals that God’s fingers (or hands) have prepared a place of eternal punishment for the wicked called “hell,” a place of eternal fire and torment. This is in stark contrast from the wonderful place God is preparing for His cchildren—Heaven.

An NFL quarterback has expensive fingers!  A surgeon has skilled fingers.  A pianist has nimble fingers.  Well, the New Testament unveils the Lord Jesus, and He has tender, soothing, compassionate fingers!  He loves people, and often touched them in a tender, loving manner.

*God’s passion for the Healing of the Sick (suffering)

Mark 7:32-35  tells the story of a man who was deaf and mute.  They brought him to Jesus who “put his fingers in his ears, and He spat and touched his tongue, and said to him, “be opened.”  The Bible then says that the man’s ears were opened, his tongue was loosed, and he spoke plainly.  Wow, another of our Lord’s miracles!  And this time He used His fingers in a unique way to heal the sick.  At other times, Jesus lovingly touched the eyes of the blind, the legs of the lame, and the decaying bodies of lepers.  Oh, the love that can be displayed by the simple touch of the Master’s hand!

*God’s passion for the Humility of the Soul

In Mark 10:13-16, parents bring their little children to Jesus so that He might touch them. But the disciples rebuked the parents for interrupting the Master.  But the well-known response of Jesus was, “Let the little children come to Me, and do not forbid them, for of such is the kingdom of God.  Assuredly I say to you, whoever does not receive the kingdom of God as a little child, will by no means enter it.”

What was Jesus saying?  His main point was that we must become like a little child to go to Heaven.  That is because little children generally are not yet arrogant, sophisticated, or wise in their own eyes.  In other words, they still have a humble, teachable spirit.  Virtually all little children are ready, willing, and anxious to come to Jesus!  And Jesus welcomes children, and all who will humble themselves as a little child and surrender to Him in child-like faith.  Consider these scriptures. . .

In the Words of Song

Shackled by a heavy burden,
‘neath the load of sin and shame;
then the hand of Jesus touched me,
and now I am no longer the same!
He touched me, Yes, He touched me;
and Oh, the joy that floods my soul!
Something happened and now I know,
He touched me and made me whole!”

Have you ever humbled yourself before God, and let Jesus touch your life?  If not, there is no better time than right now!  Repent of your sin, believe in Christ’s death, burial and resurrection on your behalf.  Ask Him to heal your spirit and save your soul.  You will never regret being touched by the Master’s Hand!

Click here: How to Be Saved and Born Again?