What Are The Anthropomorphic Expressions of God? 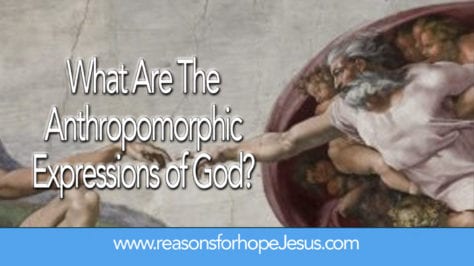 Nave’s Topical Bible defines anthropomorphisms as “figures of speech which attribute human forms, acts, and affections to God”.  The International Standard Bible Encyclopedia’s definition is “the attribution to God of human form, parts or passions”, especially in…“the Old Testament when it ascribes to Deity physical characters, mental and moral attributes like those of man, it merely means to make the Divine nature and operations intelligible”.

It will not surprise you to know that innumerable volumes have been written on this subject.  We will only scratch the surface of this subject, but it is one that deserves to be revisited from time to time because it helps us to better know and understand our awesome God, which should be the goal of every true believer.  Jeremiah 9:23-24 says,

“Let not the wise man glory in his wisdom, let not the mighty man glory in his might, nor let the rich man glory in his riches; but let him who glories glory in this, that he understands and knows Me, that I am the Lord, exercising lovingkindness, judgment, and righteousness in the earth; for in these I delight, says the Lord.”

Knowing God and Knowing Self

The study of anthropomorphisms not only helps us understand God more fully, but it also helps us understand ourselves better because we are created in the image of God, as Genesis 1:26-27 tells us.  It is clear in scripture that God (amazingly) desires an intimate relationship with us.  After creation, the Bible tells us that God came down to the Garden of Eden in the cool of the evening to converse with Adam and Eve.  Their sin interrupted that precious fellowship, plunged mankind into spiritual and eternal separation, and necessitated the plan of redemption to bring salvation to all who would  repent and believe in the finished work of Christ through his incarnation, life, death, burial, resurrection, and ascension.

We human beings are unique in all creation as we are made in God’s image.  The animals, insects, fish or birds cannot know or understand God.

God has revealed Himself in several ways; through creation, visions, and dreams, by angels, by prophets and apostles, by the written Word/ Scripture, and by His Son, Jesus Christ who visited this planet 2000 years ago.  None of us who are alive today were present to witness creation, hear the prophets or apostles,  nor were we able to witness the physical ministry of Christ on earth.  So we must rely on Scripture alone to help us know and understand God. Thankfully the Lord has preserved His inspired, infallible Word that tells us all that we need for life and godliness.

The very first words of Scripture are, “In the beginning, God…”.   The Bible does not seek to prove the existence of God but rather describes in astounding terms the work of a sovereign, all-powerful Creator who made all that we see and know in six days, culminating with the creation of man.

“God said, ‘Let Us make man in Our image according to Our likeness…so God created man in His own image; in the image of God He created them; male and female He created them. ‘“ (Gen 1:26-27)

We can conclude (as we compare Scripture with many other supporting Scriptures) that God is infinite, self-existing, omnipotent, omniscient, omnipresent, sovereign, communicative, loving, and He is a trinity—existing in 3 distinct persons, yet One in essence.  Admittedly there is much we do not, and cannot comprehend about such a transcendent Being, but it is abundantly  clear that this incredible God knows us, and He wants us to know Him.

Another term that Bible scholars and students use is Progressive Revelation, which is the concept that God does not tell us everything about Himself all at once, but that He gradually reveals more and more about Himself as we read and study the Bible.  For example, the Old Testament saints did not have a clear revelation about the Tri-unity of God, the person and work of God’s Son Jesus the Messiah, or the coming institution of the Church, the Body of Christ.  We, however,  have the privilege of having the completed revelation of all 66 books of the Bible.  Abraham, Isaac, Jacob, and Joseph had no written Scripture, yet they knew God personally and had an intimate relationship with Him.

Moses grew to have a more intimate relationship with God than any other man in the Old Testament.  He knew and spoke to the Lord, “face to face”(Deut. 34:10).  Yet that does not mean that God (the Father) literally has a face.  In fact, Moses pleaded for God to physically show His glory to him, and God told him, “You cannot see My face; for no man shall see Me and live” (Ex. 33:20).   Jesus said of the Father, “God is Spirit, and those who worship Him must worship in spirit and truth” (John 4:24).   So as we grow in understanding  God, we realize He is One in essence, yet exists in 3 Persons; the Father, the Son, and the Holy Spirit.  God the Father and God the Spirit do not have a body and are invisible.  Yet the Father and Spirit have the attributes of personhood, and we can personally relate and communicate with them, so it is scripturally accurate and acceptable to do so in personal terms which we call anthropomorphisms.

In my view, it is the Lord Jesus who is the principle key to knowing and understanding God.  Apparently the disciples wrestled with all of this, as “Philip said to Him (Jesus), ‘Lord, show us the Father, and it is sufficient for us.’  Jesus said to him, ‘Have I been with you so long and yet you have not known Me, Philip? He who has seen Me has seen the Father’.”- John 14:8-9.   The apostle Paul later wrote, “Christ is the Image of God” (2 Cor. 4:4), and “He is the image of the invisible God” (Col. 1:15), and “In Him dwells all the fullness of the Godhead bodily” (Col. 2:9).

The Bible could not be more clear.  God came to this world 2000 years ago in the person of His Son, Jesus Christ.  Jesus had a body, face, eyes, hands, arms, and legs, with a mind that exhibited perfect knowledge, emotions, and a will that was in constant, flawless submission to the Heavenly Father.  And it is the will of the Father  that we are “to be conformed to the image of His Son” (Rom. 8:29).

So that is the goal!  Our Loving Heavenly Father wants us to be more like His Son, Jesus!  And that is also the aim of this series , that you and I would be more like Jesus!  I hope you will join me in pondering the Anthropomorphic Expressions of God.  By God’s grace we will study the mind, face, eyes, ears, voice, shoulders of God, and a whole lot more, including His loving heart.  And may the Spirit of God open our eyes to see these precious expressions of our Father God, so we may be more like the Son of God!