How Should We Understand the Nose of God? 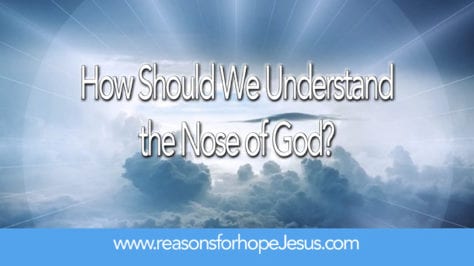 Though God is an invisible spirit, Scripture speaks of Him in human terms called anthropomorphisms (Read: What is Anthropomorphism?).  Since the Bible attributes these characteristics to God, we are helped in understanding this omnipotent Being who created us in His image and desires a personal relationship with us. We  have discussed the Face of God generally, and have specifically studied the Eyes and Ears of God.  In this article we will consider the Nose of God.

Humanly speaking, one’s nose plays a prominent role in one’s appearance.  Noses can be large or small, wide or thin, upturned or flat, straight or crooked, etc.  But a nose is much more than a facial feature, it has important functions that affect our quality of life.  An unknown poet wrote this  humorous poem.

How important is a nose?
Painfully important if you come to blows!
But a nose is so small’, somebody cries;
Yes, but it lets you know if something dies!
The cook would be shook if her nose were took;
it’s just as important as her recipe’ book.
The jockey is glad and his happy face glows,
when the announcer says he has won by a nose!
Miss America pageants are not won by clothes,
but by the girl who has the most beautiful nose.
So you see, this little poem convincingly shows,
that few things are as important as a little old nose!

*The Old Testament Symbol of Prayer

The epicenter of worship among the Israelites, during the wilderness wanderings was the Tabernacle.  After the law was given to Moses, God gave him detailed instructions on how to build the Tabernacle and the instruments of worship. One of the important instruments in the Holy Place was the Altar of Incense.

The Levitical priests ministered in the tabernacle and their main duty was to represent God to the people, and to represent the people to God (Leviticus 8-10).  The main vehicle of this representation was prayer, and the symbol of prayer was incense.  The Altar of Incense was placed in the Holy Place, before the veil that separated them from the Most Holy Place. On this altar, the Lord instructed them to burn incense perpetually.  The priests would tend the altar daily, and as the sweet aroma of incense rose to the heavens, so did the intercessory prayers of the priests.

Jesus said… “Men always ought to pray and not lose heart.” (Luke 18:1).  The apostle Paul instructed saints to… “Pray without ceasing” (I Thes. 5:17), and he set the example saying, “We give thanks to God always for you all, making mention of you in our prayers; remembering without ceasing your work of faith, labor of love, and patience of hope…” (I Thes. 1:2-3).

*The New Testament Significance of Prayer

“Therefore I exhort first of all that supplications, prayers, intercessions, and giving of thanks be made for all men, for kings and all who are in authority, that we may lead a quiet and peaceable life in all godliness and reverence.  For this is good and acceptable in the sight of God our Savior.” (I Tim. 2:1-3).

When the early church in Jerusalem was exploding numerically and experiencing growing pains, it required the apostles to stop and realize they needed more help in caring for the expanding needs of the flock.  So they led the church to elect deacons to assist in serving, allowing them to put first things first.

The apostles said in Acts 6:3-4, “Therefore brethren, seek out from among you seven men of good reputation, full of the Holy Spirit and wisdom, whom we may appoint over this business; but we will give ourselves continually to prayer and to the ministry of the word.”  The hymnwriter penned these thought-provoking words…

Ere you left your room this morning, did you think to pray?
In the name of Christ our Savior, did you sue for loving favor as a shield today?
Oh how praying rests the weary! Prayer will change the night to day;
So when life seems dark and dreary, don’t forget to pray.

God loves the aroma of Supplication!

God Loves the Aroma of SACRIFICE

*The Example of Old Testament Saints

Since the beginning of creation there have been many natural disasters and human calamities causing great loss of life.  But the most devastating and deadliest of all was the Great Flood.  The Bible records that everyone and everything on earth died that had the breath of life in them, except for Noah and his family (eight souls), and the animals, birds, etc., that were with them in the Ark.  It must have been very sobering for Noah to exit the ark knowing that he and his family were the only human beings to survive, and he expressed his gratitude and worship by building an altar.

Gen. 8:20-23 says, “Then Noah built an altar to the Lord and took of every clean animal, and of every clean bird, and offered burnt offerings on the altar.  And the Lord smelled a soothing aroma.  Then the Lord said in His heart, ‘I will never again curse the ground for man’s sake, although the imagination of man’s heart is evil from his youth; nor will I again destroy every living thing as I have done.  While earth remains, seedtime and harvest, cold and heat, winter and summer, and day and night shall not cease.’”

Later on, many other patriarchs built altars of sacrifice unto God, including Abraham, Isaac, Jacob, Moses, Joshua, Samuel and others.  Clearly the Lord loves the aroma of sacrifice, but does He still?

*The Exhortation to New Testament Saints

Romans 12:1-2 declares, “I beseech you therefore brethren by the mercies of God, that you present your bodies a living sacrifice, holy, acceptable to God, which is your reasonable service.  And do not be conformed to this world, but be transformed by the renewing of your mind, that you may prove what is that good and acceptable and perfect will of God.”

Clearly animal sacrifices are no longer needed.  Jesus was the sacrifice to end all sacrifices!  Jesus is the Lamb of God who came to take away the sin of the world, (John 1:19).  But the verses in Romans quoted above tell us what kind of sacrifice that pleases God now in this New Testament age of grace.

God is pleased when His blood-bought children set aside their own personal plans and wishes, and fully dedicate themselves to live completely for Him.  The apostle Paul did this immediately when he had that famous encounter with Christ on the road to Damascus.  Jesus interrupted his journey as he intended to oppose the gospel and persecute Christians. The brightness of God’s glory blinded him, and Jesus powerfully introduced Himself.  Stunned and humbled, Paul (then called Saul of Tarsus) said these words that changed his life and eternal destiny… “Lord, what do you want me to do?”  Calling Jesus, Lord, was an evidence of his conversion for he had considered Jesus as an imposter and counterfeit messiah up to that point.  But Paul immediately moved to the next step and sincerely presented his body and his willingness to serve his Lord and Master for the rest of his life as he asked… “What do you want me to do?”  So Paul was converted and dedicated his life, all at the same time.

Some (I fear many) Christians are glad to be saved, forgiven and headed for heaven, but have never placed their body on the altar of sacrifice to God, which is “our reasonable service.”  Jesus died for us, it is only reasonable that we should live for him, and not for ourselves.  That’s why it is called a living sacrifice.  The animals used in the Old Testament sacrifices were slain, their blood was drained and their lifeless bodies were place on the altar of sacrifice.  On the other hand, we are to voluntarily and sacrificially place ourselves on the altar, pledging to live not for ourselves but for our Lord and Savior.  Someone has rightfully said, “the problem with a living sacrifice is that it keeps crawling off the altar!”  Sadly, that describes many professing believers.

The story is told of a preacher who asked a dying man, “Sir, are you certain that you are ready to die…that you are saved?”  The man said, “My soul is saved, but I’ve wasted my life.  I’m not afraid to die, but I must confess that I am ashamed to die.”

How about you, dear reader?  God is a Person, and He loves to smell the sweet aroma of our supplication and sacrifice.  An old chorus says,… “How can I do less than give Him my best, and live for Him completely, after all He’s done for me!”