How Should We Understand the Hands of God? 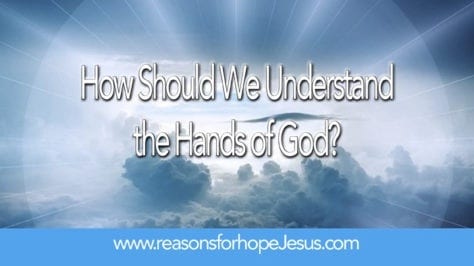 God the Father is an invisible spirit and has no physical body.  Yet the Bible refers to Him as having physical characteristics that theologians call Anthropormorphisms.  Even though He has no body, Scripture does speak of God’s eyes, ears, nose, arms, etc.  We’ve already covered the mind, face, eyes, ears, nose, voice, shoulder, back, and arms of God.  Let’s now consider the hands of God.  “Hand” or “hands” are mentioned over 1800 times in the Bible.  Most often it is human hands mentioned.  But the hands of the Lord are referenced dozens of times, and these passages help us to further understand our great God in at least 5 ways.

Acts 11:19-21  Now those who were scattered after the persecution that arose over Stephen traveled as far as Phoenicia, Cyprus, and Antioch, preaching the word to no one but the Jews only.  But some of them were men from Cyprus and Cyrene, who, when they had come to Antioch, spoke to the Hellenists, preaching the Lord Jesus.  And the hand of the Lord was with them, and a great number believed and turned to the Lord.

These verses describe the incredible, rapid expansion of the early church in the 1st century.  After great persecution arose in Jerusalem, thousands of Christians fle.  As they went, they witnessed about Jesus Christ. God’s hand was on them and their message resulted in the spread of the gospel, the salvation of many souls, and the founding of many churches all over the world.

In Scripture we see the mighty hand of God demonstrated through many people.  These supernatural demonstrations or events are called ‘miracles.’  During Christ’s earthly ministry, He did His miracles in the power of the Holy Spirit.  After He rose from the dead and just before ascending back to Heaven, He told His disciples in Acts 1:8:

“But you shall receive power when the Holy Spirit has come upon you; and you shall be witnesses to Me in Jerusalem, and in all Judea and Samaria, and to the end of the earth.”

On the Day of Pentecost, Peter was filled with the Holy Spirit and preached the gospel resulting in the salvation of 3000 souls.  A few days later, 5000 more were saved, and so it went as the early Christians faithfully witnessed of Jesus and His power to forgive sins and grant the gift of eternal life to any and all who would repent and believe in Him.

1 Chronicles 4:10  “And Jabez called on the God of Israel saying, ‘Oh, that You would bless me indeed, and enlarge my territory, that Your Hand would be with me, and that you would keep me from the evil, that I may not cause pain!  So God granted him what he requested.”

This is the only mention of Jabez in the Bible, but he prays a wonderful prayer. Years ago, I preached a sermon on this text and some years later, Dr. Bruce Wilkinson wrote a book on it called The Prayer of Jabez.

When studying the passage you see that Jabez got a rough start in life and didn’t have anything going for him.  But in this sincere prayer, he earnestly asked God to put His hand on him in order to experience divine blessing and protection.

Centuries later, Jesus taught His followers to pray… “and lead us not into temptation, but deliver us from evil…”  Throughout history, God’s saints have depended on His hand of protection, eg. Esther, Elijah, David, Jeremiah, Daniel, etc.

The apostle Peter reminds us…

“casting all your care upon Him, for He cares for you.  Be sober,  be vigilant; because your adversary, the devil, walks about like a roaring lion seeking whom he may devour”.

It’s so good to know that our Heavenly Father cares, that He watches over us, and that His hand of protection rests on His obedient children!

When I was a little child, I remember times that I tried to get something out of my dad’s hand.  I would try with all my might to pry my strong father’s fingers open, but was never able.  Jesus taught that God’s true saints are eternally secure.  In fact, there is a ‘double lock’ on their eternal security!  Every believer is held tightly by both the Father and the Son.  They will never let go, and no one, or nothing, can ever separate us from the loving hand of God (Rom. 8:38-39).

This passage and many others have contributed to the Doctrine of Eternal Security. (Read: What is eternal security/assurance of salvation?)  A true understanding of this wonderful truth does not lead to a blatant license to careless living, but to a blessed assurance for careful, prayerful serving of our Good Shepherd and Father of Mercies.

Matthew 25:41… “Then He will also say to those on the left hand, ‘Depart from Me, you cursed, into the everlasting fire prepared for the devil and his angels.”

I take no delight in saying this, but Scripture clearly teaches there is an eternal Hell that awaits all who have rejected God’s sovereign authority and gracious plan of redemption.  The Bible also unequivocally teaches that God is the creator and sustainer of everthing!  Exodus 20:11 says:

“For in six days the Lord made the heavens and the earth, the sea, and all that is in them…”

Now who will go to this place of eternal punishment?  First, the Devil and his angels, as Mt. 25:41 states.  Second, the Beast and False Prophet as Rev. 19:20, 20:10 declares. Third, all Unbelievers, as Rev. 20:11-15 says… “and anyone not found written in the Book of Life was cast into the Lake of Fire”.  So the Bible teaches that God originally made Hell as the eternal abode of Satan and his evil angels, but it is also the place where all will reside who do not choose by faith to follow Jesus.  The good news is that no one has to go to Hell!

Hebrews 11 is a wonderful listing of ‘Heaven’s Hall of Fame,’ or heroes (and heroines) of the faith.  In verses 8-16, Abraham is featured and we learn of the deep yearning of Abraham’s heart.  With great faith he obeyed God, following His commands, dwelling in tents, living as a stranger or pilgrim on the earth.  But all the while, Abraham was looking forward by faith to a heavenly “city which has foundations (unlike a tent), whose builder and maker is God”.  Abraham knew that paradise would never be found on this earth, even when he reached the land  the Lord had promised to him and his descendants.

Jesus shed more light on this subject of eternal paradise as He taught His disciples in John 14:1-3:

“Let not your heart be troubled; you believe in God, believe also in Me.  In My Father’s house are many mansions; if it were not so, I would have told you.  I go to prepare a place for you; and if I go and prepare a place for you, I will come again and receive you to Myself; that where I am, there you may be also.”

Now we don’t get our theology from a dream, but that’s good theology!  There are many church members or attenders who are lost, and multitudes have died in their sins and abide in Hell.

No one has to go to hell, and anyone can be saved!

“For God so loved the world that He gave His only begotten Son, that whoever believes in Him should not perish, but have everlasting life” (Jn. 3:16).

Friend, are you certain that you are saved, and that Jesus is preparing a place for you? (Read: Has Jesus CHANGED Your Life?) If so, like Abraham, you can endure all earthly trials because you are looking for that heavenly city which has foundations, whose builder and maker is God!  And you can say with the songwriter…

This world is not my home, I’m just a passin’ through.
My treasures are laid up, somewhere beyond the blue.
The angels beckon me through Heaven’s open door,
and I can’t feel at home in this world any more!

One of my favorite hymns is “Until Then”, written by Stuart Hamblen….

My heart can sing when I pause to remember,
a heartache here is but a stepping stone;
along a trail that’s winding always upward,
this troubled world is not my final home…
But until then, my heart will go on singing;
Until then, with joy I’ll carry on.
Until the day, my eyes behold the city;
Until the day, God calls me Home!