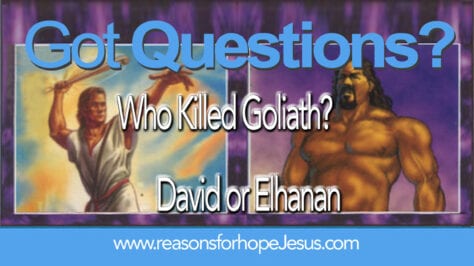 Who killed Goliath?  Is there any doubt?  Some say, yes, because of a verse in 2 Samuel that seems to contradict 1 Samuel 17 that says David killed Goliath.  In the Hebrew text (Jewish Publication Society translation), the killing of Goliath is attributed to Elhanan:

2 Sam 21:15  And the Philistines had war again with Israel; and David went down, and his servants with him, and fought against the Philistines; and David waxed faint.  2 Sam 21:19 And there was again war with the Philistines at Gob; and Elhanan the son of Jaare-oregim the Bethlehemite slew Goliath the Gittite, the staff of whose spear was like a weaver’s beam.

A Contradiction About Who Killed Goliath?

1 Sam 17:4, 23-24  And there went out a champion from the camp of the Philistines, named Goliath, of Gath, whose height was six cubits and a span. . . And as he [David] talked with them [his brethren], behold, there came up the champion, the Philistine of Gath, Goliath by name, out of the ranks of the Philistines, and spoke according to the same words; and David heard them. And all the men of Israel, when they saw the man, fled from him, and were sore afraid.

Clearly, the Bible tells us that David killed Goliath. But what about the verse in 2 Samuel?

Let’s first remember that as Christians, we believe the Bible to be the inerrant Word of God (That’s the “I” in IVDARR.  Read: What is IVDAR? Or IVDARR?).  Since the Bible is inerrant, whenever we find something that appears to be a contradiction, we must dig deeper to find an answer. Let’s look at possible explanations for 2 Samuel 21:19 by beginning with what we know for certain.

This raises the questions: If Goliath was already dead, how could Elhanan have killed him?  Or is the Bible wrong? (God forbid!)

1 Chronicles 20:5  And there was war again with the Philistines; and Elhanan the son of Jair slew Lahmi the brother of Goliath the Gittite, whose spear staff was like a weaver’s beam.

Clarification in Some Translations

Bible translations based on the manuscripts that originated around Atioch, Syria (the KJV and NKJV only), have added the words “the brother of”  to 2 Samuel 21:19.   You might be thinking it is wrong to add words that weren’t there in the Hebrew manuscripts, but note that the words are italicized to indicate they have been added. Insertion of words in italics is also done for readability. In this case, some Bibles added words for clarity.  Both the KJV and NKJV read:

2 Samuel 21:19  And there was again a battle in Gob with the Philistines, where Elhanan the son of Jaareoregim, a Bethlehemite, slew the brother of Goliath the Gittite, the staff of whose spear was like a weaver’s beam. [underlining mine; Italics found in KJV and NKJV translations. Some Bibles will also have the added words in a lighter font.)

In recent years, as this explanation has been more widely accepted, some of the Bibles that are translated from the Alexandrian line of manuscripts (those that originated around Alexandria, Egypt) have also added “the brother of” — however, most do not contain the addition.  Again, translators support the inclusion of these words with the verse in 1 Chronicles that tells of Elhanan and provides the additional information (1 Chron 20:5, above).

While “the brother of” is the most widely accepted explanation, there are two other explanations that have been suggested for “who killed Goliath?”

Of the three possible explanations, the last one is most unlikely.  The explanation suggested by the Jewish Targum might sound good, but it is also without merit since there is no support for David ever having been called anything other than David. Plus, Jair being a reference to David’s father Jesse is simply conjecture.  Furthermore, 2 Samuel 21:19 says Goliath was slain in the valley of Gob, and we know for certain David fought Goliath in the Valley of Elah.

Again, the most widely accepted explanation is that Elhanan killed the brother of Goliath and that 1 Chronicles 20:5 supports this reasoning by providing additional information.  This is similarly seen in the New Testament when one gospel account will provide additional detail that is not found in another. Therefore, we accept that the words “the brother of” were correctly added for clarification and to settle what seems to be a contradiction about who killed Goliath?  Answer: David killed Goliath, just as we are told in 1 Samuel 17:49-51.

Search the Bible, like the Bereans (Acts 17:11), and find answers and reasoning for difficult questions. Always remember, as Christians we are not expected to fully understand everything in the Bible…but we are expected to believe God.  Because we know that we have an inspired and inerrant Bible — preserved, as promised, by God– we can believe those things which don’t fully understand. Seek the Lord as you read and study His word and believe and trust that He will reveal all truth to you.

James 1:5-6  If any of you lacks wisdom, let him ask of God, who gives to all liberally and without reproach, and it will be given to him. But let him ask in faith, with no doubting…

1 John 2:27  But the anointing which you have received from Him abides in you, and you do not need that anyone teach you; but as the same anointing teaches you concerning all things, and is true, and is not a lie, and just as it has taught you, you will abide in Him.