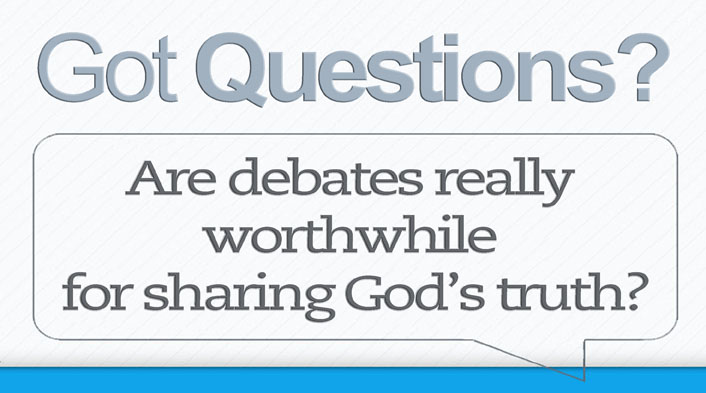 In February of 2014, Ken Ham (Christian) and Bill Nye (Science Guy) held a debate at the Creation Museum in Kentucky that garnered national attention.  Ken Ham stood on God’s Word and His account of creation and Bill Nye disputed it.

Are such debates an effective means to share God’s truth?  Can debates be used to share the gospel?

What is a Debate?

The dictionary defines the verb debate in many ways:  To consider something; deliberate; To engage in argument by discussing opposing points; To engage in a formal discussion or argument.  The noun, debate, is defined as a discussion involving opposing points; an argument; deliberation; consideration; a formal contest of argumentation in which two opposing teams defend and attack a given proposition. Here we are specifically addressing debates between Christians and non-Christians, in which non-Christians dispute God’s truths and Christians defend God’s truth.  While there are both formal and informal debates,  we are focusing on scheduled, structured debates that are held in a public forum

Debates offer a platform to have one’s knowledge and opinions heard.

As Christians and ambassadors for the Lord Jesus Christ, we are to share our faith.  Therefore, a debate can be another method of doing so.  If done properly, which always means in a God-honoring way, a debate can not only be educational, it can also be fun.  The end goal of every debate should be to present biblical truths in a way that will:

The outcome of a debate is determined by how effectively each side presents its position.  However, that doesn’t necessarily mean there will be a clear-cut “winner.”  Clear communication of knowledge and opinions produces a good debate, while the “winner” of the debate is a subjective determination.

Are debates important, effective, and useful in sharing God’s truth?  Our answer is yes because debates can be a platform for Christian apologetics (defending the faith by giving answers). Therefore, debates can be used as a tool to share God’s message and build His Kingdom.  However, as Christians, we must remember that the most important objective in a debate is to honor and glorify God.  So as Peter reminds us in 1 Peter 3:15, we are to sanctify God not only by being “ready always to give an answer,” but also by doing so “with meekness [i.e. gentleness] and fear [i.e. respect].”

The outcome of a debate is really not up to those who speak, but is determined by those who hear.  As Christians, we know that when we speak God’s truths clearly and kindly we plant seeds, so there is never a loss.  We can trust that God will use our words for His good plan and purposes.

In the case of the Ken Ham/Bill Nye debate, we would claim that Ken Ham won. As a televised debate, Ken Ham not only defended biblical creation but also proclaimed the gospel to countless numbers of people who needed to hear of the love of God and salvation in Jesus.  We pray they had ears to hear and hearts that responded.

Visit Our Store for Print Books and more Apologetics Resouces

Is my TATTOO a sin?
The Meaning of COLORS in the Bible? The Meaning of NUMBERS in the Bible?
Is SUICIDE an Unforgivable Sin?
Is it a sin to be FAT?
To TAT (tattoo) or Not to Tat? Is That the Question?
What do the 12 stones UNDER the JORDAN River mean? (Joshua 4)
Can JEWS go to HEAVEN without knowing Jesus?