Why Does the LGBT Use God’s Rainbow For Its Flag? 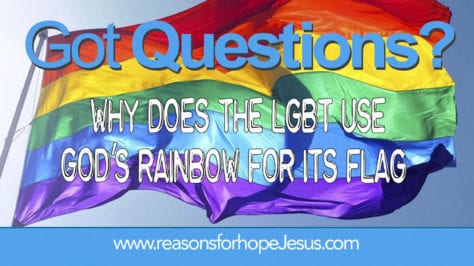 The answer about the LGBT rainbow flag will surprise you. But first, let’s walk through some history.

Forever, the rainbow has been a symbol of God’s promise.  This dates back to the everlasting covenant God made with Noah and his sons (the Noahic covenant).  It was for all mankind.  It was that Noah’s family and for all generations to come.  God promised that He would never again destroy the earth with flood waters and, as a sign of the covenant, God placed a rainbow in the sky.

Genesis 9:8-17  Then God spoke to Noah and to his sons with him, saying: “And as for Me, behold, I establish My covenant with you and with your descendants after you, and with every living creature that is with you: the birds, the cattle, and every beast of the earth with you, of all that go out of the ark, every beast of the earth.  Thus I establish My covenant with you: Never again shall all flesh be cut off by the waters of the flood; never again shall there be a flood to destroy the earth.”

A Rainbow of Remembrance

God put the rainbow in the cloud as a reminder of His covenant.  God also spoke to Noah and said that He would look on the rainbow to remember His covenant.  Understand that this does not mean that God would forget His promise.  God is omniscient (all-knowing), therefore, His remembrance is different than that of man.  God cannot forget His promises, but man all too often does forget– and many have forgotten the true meaning of a rainbow in the sky.

Throughout the millennia, rainbows have appeared in the clouds and they are meant to be a token, or a sign (Gen 9:12-13), for all mankind.  The rainbow is given to remind us of God’s justice in judging sin and His mercy and grace in providing a way to be saved.  In addition, the multi-colors of the rainbow can remind us of the splendor of Heaven, and the glorious radiant colors around the throne  (as described by the apostle John in Revelation 4-5).

Man’s Use of Rainbow Flags

It wasn’t until 1978 that San Francisco artist and drag queen Gilbert Baker popularized a multi-colored flag as the symbol of the gay community, which today has broadened to include lesbian, gay, bisexual and transgender (LGBT).   Before that, the symbol of the gay movement was a pink triangle, which had originally been used by the Nazis in concentration camps to denote gay people and other sexual deviants. The gay movement had reclaimed the pink triangle during the 1970s, but some felt the symbol still had disturbing connotations.¹

In 1979, when flags were ordered for the Gay Freedom Day Parade “ the hot pink fabric was too rare and expensive to include.” The flag also lost its indigo stripe (representing harmony/peace) at that time.¹

The LGBT Flag Is Not a Rainbow Flag

The LGBT flag might be called by the name of God’s token of promise to all mankind, but it is NOT a rainbow flag.  It is simply a multi-colored flag because the LGBT flag has only six colors.  A rainbow always has had seven colors, and it always will, because God put the colors in the rainbow: red, orange, yellow, green, blue, indigo and violet. Notice that hot pink (sex) was never in God’s rainbow, but indigo, meaning harmony and peace, has always been in God’s rainbow).   It’s also interesting to note that seven is God’s number of completion and perfection, and the number six falls short by one.  Six is the number of man (Read: The Meaning of Numbers in the Bible).

Throughout human history, we find that things which are in opposition to God’s will are often simply counterfeit copies.  Such copies might come close, but they always fall short.  All false religions have enough truth to sound good, but they teach subtle lies by twisting the truth.  That was Satan’s ploy in the Garden.  He twisted God’s Word, using subtle deception, and he created confusion and caused Eve to forget God’s words and to sin.

Satan never presents himself in truth — as the accuser that he is.  Instead, he is able to transform himself into an “angel of light,” and his minions are able to transform into “ministers of righteousness” (2 Cor 11:14-15), all with intent to deceive.  They may “look” good, but they are nothing more than “copy-cat” appearances of that which is good, and their desire is to lead people away from the One True God who is omnibenevolent (all good).

God created the rainbow and it belongs to Him.  God’s rainbow has seven colors.  Interestingly, according to Strong’s Dictionary, even the Hebrew word “rainbow” has seven letters (qesheth).  We should think of God’s rainbow as representing these seven things: His love, mercy, and grace; His truth, promises, and faithfulness; and, of course, His longsuffering (patience) with sinners like us.  His desire is that all will repent and seek Him.  His true rainbow will never represent, nor can it ever celebrate any sinful behavior.

I hope you’ll never look at the LGBT flag in the same way again.  The LGBT flag is NOT a rainbow flag! It falls short in every way….especially in what it represents.

Other Multi-colored Flags to Consider

The colors red, black, white, and green are used in a number of country’s flags.  What significance might these colors have?

There is a biblical significance in these colors.  In chapter six of the book of Revelation, we read of John watching as Jesus opens a scroll and sends forth seven seal judgments.  The first four of those judgments are represented by four men riding on four horses (commonly called The Four Horsemen of the Apocalypse).  Each horse is a different color.  The horses’ colors are, white, red, black and pale (a sickly shade of green).

So what do the countries whose flags bear those colors have in common?

So is a flag just a flag?  Or…is what the flag represents significant?

I believe a flag does have significance, because it is a token, or a sign, of what it represents.  Flags represent nations or people groups by their emblems and their colors.

The U.S. flag has 50 stars to represent the 50 states and 13 stripes to represent the original 13 colonies. The book “Our Flag,” published in 1989 by the House of Representatives, tells that the colors are significant in what they represent:  “White signifies purity and innocence; Red, hardiness & valor; and Blue, the color of the Chief” ³

The Most Significant Flag

As Christians, we are a people group with citizenship in a far-away land. We are citizens of Heaven (Philippians 3:20).  And just as countries have a flag that represents their land and their people, we also have a flag.  Our flag is a banner of victory in our God, our Jehovah Nissi. 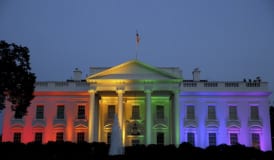