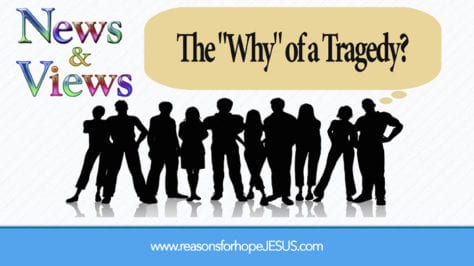 I’ve been guilty of jumping to conclusions as to the “why” of a tragedy, haven’t you? I’ve thought often that I had the reason pegged for something tragic that occurred. As I look back on some of my assumptions I’ve often found them having little if any validity.

The tragic shootings and deaths that occurred in Orlando on 6/12/16 are on a lot of our minds right now. Obviously the media is on it, giving details and updates on a regular basis. One thing for sure, all the details are not yet in and it behooves us Christians to be of a patient nature and not be caught offering our analysis before we have the facts.

One thing I do know, it is indeed a tragedy, this terrible event that took place in Orlando. The carnage certainly was excessive and, when one attempts to put themselves in that setting, it can be a very sobering thought process. One man, bent on killing as many people as he could, and doing so with a religious zeal, carried out his most wicked deed.  It surely causes us to have a great pause, does it not?  And, in that pause, we must reflect on the violent world we live in.

Tragedies have been many: 9/11 and the World Trade Centers, Fort Hood, Sandy Hook, San Bernardino, Paris, Belgium, and now Orlando. Oh the list is much larger than that, but my intent is not to list them all.  My intent is to make note of some highly significant tragedies that I’m sure each one of us knows of and about. Tragedies!

• “And He [Jesus] was saying, ‘That which proceeds out of the man, that is what defiles the man. For from within, out of the heart of men, proceed the evil thoughts, fornications, thefts, murders, adulteries, deeds of coveting and wickedness, as well as deceit, sensuality, envy, slander, pride and foolishness. All these evil things proceed from within and defile the man.'” (Mark 7:20-23)

Many of the things listed by the Lord fit the condition of a heart that is within a man and lead him to carry out a such a devastating mass killing as took place in Orlando, and for that matter, are at the very core of all other tragedies that have taken place throughout history.

I think, as we consider Orlando, what we need to do is to take very special note of what Jesus said when He was confronted with tragedies of His time. Take note . . . .

• “Now on the same occasion there were some present who reported to Him about the Galileans, whose blood Pilate had mingled with their sacrifices. And He answered and said to them, ‘Do you suppose that these Galileans were greater sinners than all other Galileans, because they suffered this fate? I tell you, no, but unless you repent, you will all likewise perish.'” (Luke 13:1-3)

It was common in that day and time to surmise that if a disaster befell a number of people, especially a tragic event with widespread loss of life, that they had done something of an evil nature that warranted it. Was such speculation on the part of the people valid?

Jesus got right to the crux of their thinking . . . “Do you suppose that these Galileans were greater sinners . . . because they suffered this fate?” And as they waited He said, “I tell you, no.”  Your suppositions, your self-formed ideas of why a tragedy occurred, why a people died; they’re wrong!

What is important, Jesus says to those who have posed the question based on the tragedy, is that, “unless you repent, you will all likewise perish.”  To the living He says, “unless you repent” you are going to “perish;” that’s what you need to hear.

• “Or do you suppose that those eighteen on whom the tower in Siloam fell and killed them, were worse culprits than all the men who live in Jerusalem? I tell you, no, but unless you repent, you will all likewise perish.” (Luke 13:4-5)

I believe that the real tragedy, based on the words of Jesus Christ, is that men fail to come to the conviction that they are sinners and fall short of the glory of God (Romans 3:23). Man fails to “repent,” to turn from his sin and to turn to Jesus Christ as Lord and Savior.  Thus his “evil . . . heart” never experiences the regeneration necessary to save his eternal soul from hell. That is what matters most, because tragedies are going happen and death is going to come upon all men.

• “And inasmuch as it is appointed for men to die once and after this comes judgment” (Hebrews 9:27)

Death is “appointed for men.” And it can be by natural causes, disease, war, or maybe a tragic occurrence such as took place in Orlando. Before we start throwing around our opinions as to the “why,” let us pause, be still, and consider again the words of Jesus:

• “but unless you repent, you will all likewise perish”

In other words, you’re going to “die,” that’s a given! And if you fail to “repent” then “you will all likewise perish.” That is what Christians should have as a proper response to those who inquire of our take on the Orlando tragedy, or any other tragedy. You might think it an odd response or maybe one that doesn’t make you feel so comfortable.  But take note of Who it is that gave this counsel: Our Lord.

We really don’t have a hold on life.  Nor are we able to steer it in such a way as to have control that would enable us to avoid difficulties . . . to avoid tragedies. Tragedies are going to happen! What bothers me most about those murdered in Orlando is that unless they had repented and trusted in Jesus to save them from the penalty of sin, they perished.  That is the true tragedy.

Read also:Tears and Fears in Orlando + the President’s Response