Tears and Fears in Orlando + the President’s Response 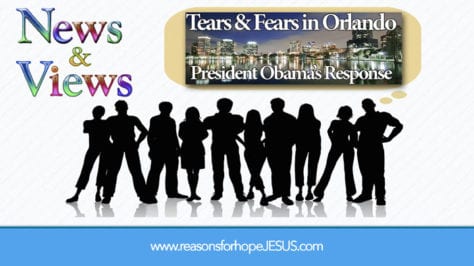 On Sunday morning, June 12, 2016, Americans awoke to the news of another attack of terror and hate.  With mass murders in an Orlando nightclub, all Americans wept for those who died.  And we all shudder, once again, with the knowledge that safety alludes us more and more with every passing day.  This act of violence is like all sins of man.  It grieves the heart of God.  But the aftermath of this act is more devastating than many sins.  This sin left 50 families without a loved one and many more in grave concern for the injured.

As Christians we discern the events of 6/12/16 very differently than others.  We know this was also an act of spiritual terrorism and hate.  Pure evil was demonstrated in the ugliest of sin.  As the story unfolded on Sunday morning, the curtain was pulled back on the spiritual realm.  We know there is a spirit of hate that opposes God and acts in defiance to His will and ways, even to the point of taking life that God created.

Reviewing how this news unfolded, and the President’s response to it, also gives us a perspective of the state of our nation.  Here’s the chronology of news releases from CNN, sent to inboxes around the world.

June 12, 2016, 6:01 AM:  The shooting at the Pulse nightclub in Orlando is a “mass casualty situation,” police say. They also said that the shooter is dead inside the club.

June 12, 2016, 7:24 AM:  Multiple people are dead inside Pulse nightclub, Orlando Police Chief John Mina said Sunday morning, just hours after a shooter opened fire in the club. At least 42 people have been transported for medical treatment, he said.

June 12, 2016, 11:04 AM: Fifty people were killed inside Pulse, an Orlando nightclub, Police Chief John Mina and other officials said Sunday morning, hours after a shooter opened fire in the deadliest mass shooting in U.S. history. In terms of deaths, the terror attack in Orlando is the worst on U.S. soil since 9/11.  At least 53 people were injured in the nightclub attack, Mina said. Police shot and killed the gunman.  The shooter has been identified as Omar Saddiqui Mateen, 29, of Fort Pierce, about 120 miles southeast of Orlando, two law enforcement officials told CNN.

June 12, 2016, 1:40 PM: A gunman killed dozens at a gay nightclub in Orlando, Florida, early Sunday, the deadliest mass shooting in U.S. history. These are the latest developments confirmed by CNN:

The President’s Message to the Nation about the Orlando Massacre

In his message to the nation at 1:59 PM from the James S. Brady Press Briefing Room, President Obama began with compassion for those personally touched by this tragedy.  He called it “a horrific massacre — of dozens of innocent people” and proclaimed, “We pray for their families, who are grasping for answers with broken hearts.  We stand with the people of Orlando, who have endured a terrible attack on their city.”  The President is right.  We are to pray for those who have been personally devastated by the deaths and injuries.

“We are still learning all the facts.  This is an open investigation.  We’ve reached no definitive judgment on the precise motivations of the killer.  The FBI is appropriately investigating this as an act of terrorism.  And I’ve directed that we must spare no effort to determine what — if any — inspiration or association this killer may have had with terrorist groups.  What is clear is that he was a person filled with hatred.  Over the coming days, we’ll uncover why and how this happened, and we will go wherever the facts lead us…”

Because this man pledged allegiance to ISIS and his actions were praised by Jihadists (see CNN report above), it clearly understood what was his intent.  Yet, the President declared that we must “…determine what — if any — inspiration or association this killer may have had with terrorist groups.”

“IF ANY?”  From the man’s own words we know that there was “inspiration and association” with ISIS.  President Obama continued with:

…“This is an especially heartbreaking day for all our friends — our fellow Americans — who are lesbian, gay, bisexual or transgender.  The shooter targeted a nightclub where people came together to be with friends, to dance and to sing, and to live.  The place where they were attacked is more than a nightclub — it is a place of solidarity and empowerment where people have come together to raise awareness, to speak their minds, and to advocate for their civil rights.”

Nightclubs are now places of “solidarity and empowerment…to raise awareness, to speak their mind and to advocate for civil rights,” as the President said?  Well, I’ll leave that statement up to you to consider.

Note that the President also said that the man targeted this nightclub.  Is he is implying that this was an attack on these people because of their sexual preference? Then we might also consider that the attacks on the World Trade Center was an attack on American commerce and affluence.  And the attack on the Pentagon was an attack on America as a world power.  Viewed with a spiritual “lens” we might agree that the religion of Islam was making statements on the love of money, homosexuality and our entire nation.  Remember, in 1979 the Iranian leader Ruhollah Khomeini labeled Israel as The Little Satan and the US as The Great Satan.

The President continued his message with:

“So this is a sobering reminder that attacks on any American — regardless of race, ethnicity, religion or sexual orientation — is an attack on all of us and on the fundamental values of equality and dignity that define us as a country.  And no act of hate or terror will ever change who we are or the values that make us Americans.”

The President’s statement should raise the questions. What “values of equality and dignity define us as a country?”  And, what “make us Americans?”  If there is no absolute standard (i.e. God’s Word that reveals His absolute truths), then relativism reigns.  What’s right for you, is right for you.  And what’s right for me, is right for me.  Therefore, who are we to say that a Jihadist, following the tenants of his religions, is wrong in what he has done?  Of course we all see the absurdity of that thinking.

President Obama’s continued remarks seemed to be of a political nature.  It’s almost as if this is a commentary on the importance of gun control, an agenda that will not solve this kind of problem.

“Today marks the most deadly shooting in American history.  The shooter was apparently armed with a handgun and a powerful assault rifle.  This massacre is therefore a further reminder of how easy it is for someone to get their hands on a weapon that lets them shoot people in a school, or in a house of worship, or a movie theater, or in a nightclub.  And we have to decide if that’s the kind of country we want to be.  And to actively do nothing is a decision as well.”

In closing the President spoke words of compassion for those who were personally affected by this tragedy.  We applaud him for that.  Our hearts go out to all who mourn a personal loss and to all Americans, as we experience, once again, a loss of peace and safety in our daily lives.  The President called for prayers for the families and friends of the victims.  With those words, we all agree.

“In the coming hours and days, we’ll learn about the victims of this tragedy.  Their names.  Their faces.  Who they were.  The joy that they brought to families and to friends, and the difference that they made in this world.  Say a prayer for them and say a prayer for their families — that God give them the strength to bear the unbearable.”

The President continued with a petition for God’s grace to be given to the people of our nation with these words:

“And that He [God] give us all the strength to be there for them [families of the victims], and the strength and courage to change.  We need to demonstrate that we are defined more — as a country — by the way they lived their lives than by the hate of the man who took them from us.”

“As we go together, we will draw inspiration from heroic and selfless acts — friends who helped friends, took care of each other and saved lives.  In the face of hate and violence, we will love one another.  We will not give in to fear or turn against each other.  Instead, we will stand united, as Americans, to protect our people, and defend our nation, and to take action against those who threaten us.

“May God bless the Americans we lost this morning.  May He comfort their families.  May God continue to watch over this country that we love.  Thank you.” (1)

Remember that at 1:40 PM on 6/12 CNN released information that the murderer had pledged allegiance to ISIS.  That makes him a terrorist, by his own admission.  Yet in the President’s address to the nation at 1:59PM he was uncertain of the intent of this man.  This tragedy was clearly the evil of man who claimed belief in a religion that opposes the One True God.

Until our nation turns to Jesus and seeks forgiveness of sins, I question how united our country will be and to what extent love will triumph over hate.  Our nation’s problem is the sin of man. Our problem is the evil that comes from an unregenerate heart. Let the horrific acts of 6/12/16 be a reminder that someone you meet today needs to hear about the love and saving grace of Jesus.

For Those Who Don’t Know Jesus

They need to hear that Jesus offers them forgiveness of sins.  If they come to Him in faith, He will save their sounds andl regenerate them unto eternal life.

For Those Who Do Know Jesus

They need to be reminded that in all things our God is present.  He is all-powerful, all-knowing and all loving.  In His time He will make all things new and His love and peace will reign for ever and ever.

Legacy of Hate or Love

The shooter left a legacy of hate.  He inflicted death upon 50 people in Orlando and pain and suffering on millions more across our nation.  In stark contrast, we worship a God of love.  He gives life and liberty to all who come to Him in faith.  Read this week’s Power of Hope and watch the short video:  The Legacy of Love — It’s Not Just For Fathers

Read more News & Views on the Orlando tragedy: The “Why” of a Tragedy?