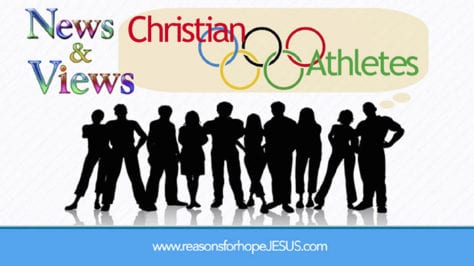 We’re all very busy with life and leisure.  Add to it, finding time to watch the Summer Olympics and the hours of a day seem to be far too few.  Therefore, this article isn’t long or in-depth. It’s simply some quotes from Olympians about their faith.  What you read will be short and sweet, inspiring and encouraging.

These quotes come from a recent, much longer, article in Christianity Today about Christian Olympians.  Below is a summary  of quotes for your quick review and for inspiration and encouragement.  Take a minute and read the words of these Olympians. Then cheer them on as they “go for the gold.”   We also ask that you pray for these faith-focused athletes and for all involved in the Olympic games (Read Olympics History, Purpose, Nature…and Fear).

“I don’t think God really cares about my swimming very much. This is not my end purpose, to make the Olympic team. My God is powerful and in control, but I don’t think he cares whether I win. It’s interesting theology you can get into when it’s a God of victory in your sport.”

“Knowing that I’m a child of God and that his love for me is determined by nothing I can achieve or do on my own has given me a quiet confidence. My faith has helped me chart my own course and pursue my goals when people around me may be going in different directions.

“Jesus’ love for me and all humanity is something that always helps me better love people around me when things get difficult.

“I think God cares about my soul and whether I’m bringing his love and mercy into the world. Can I be a loving, supportive teammate, and can I bless others around me in the same way God has been so generous with me?”

[From Manuel’s Twitter] “All glory to God. Isn’t he awesome! I am extremely blessed. A long, tough year, but may more good things to come.”

“I believe God had a plan for me to be adopted from Russia, to come to the United States and become a Paralympic swimmer. Part of His plan is for me to inspire people, whether they have a disability or not.”

Boudia is the author of the forthcoming book Greater than Gold: From Olympic Heartbreak to Ultimate Redemption. “If I represent a good God, I need to be that visual representation of him all the time, not just when I feel like it.”

“I never expected to be a professional athlete. I had to really trust him and his plan for my life. We always have our own idea of how our life is going to go, but we really have to follow the Lord’s will. I had to trust him in regards to injuries and other life situations.”

“My sport is a very public thing, and I feel like the most vulnerable place for me is on the starting line of a race. You’re out there, everyone’s watching, and you have a lot to prove in that moment – and the race hasn’t quite started yet. In contrast to that, I feel like my faith is something that is so individual, it’s never measured against another human being. It’s where I don’t feel vulnerable. It’s where a lot of my self-worth and a lot of my understanding of what is important to me, what I want to achieve in life, comes from.”

[From Akinosun’s Twitter feed, her view of Jesus]  “Alpha & Omega, carpenter, Messiah, Shepherd, the I am that I am, the King of Kings, the Prince of Peace, the morning star, Rabbi, Prophet, the Son of David, the Savior, the Lamb of God, the Light of the World, the Living bread, the Redeemer. Jesus, son of Joseph. Jesus, the Nazarene. Jesus, the Son of God. Jesus Christ, our Lord & Savior.”

“It [overcoming injuries to compete] was a process. It made me stronger as a person, spiritually and physically. I put my faith in God, knowing he would get me through it. Throughout the whole thing it was a struggle because, really, where I’m coming from, you don’t have a lot of resources. I didn’t have the resources and my family didn’t either, but God got us through it and it all paid off.”

“People notice how I am living out my faith. Sometimes it takes me by surprise how much they notice. Even when no one is looking, the way I act is important because it is a reflection of how I walk with Christ.”

“There’s a lot of pride in being a Paralympian and representing the United States. I’m blessed that through a tragedy [loss of his leg two days after becoming a Christian], the Lord has brought me where I am now and have an awesome platform to do what I love and also share my story.”

“I really think you just have to keep God as your focal point and know that he is always number one. When you do that, it will help you to gain perspective on everything in life—not just endurance sports.”

“I wanted to have a daily reminder [a Philippians 4:13 tattoo] to do everything I could to be on that team and that it was God’s plan if I made it or not. I think fitness and faith go hand in hand because there are going to be times where you are tested and you need to do your best to stay on track. You are going to fail but as long as you do your best to remember the end goal, you will be successful.”

“I take my Bible with me, sometimes two of them, when I travel…. I always pray at every competition, when the judge’s hand goes up I am praying, and there are little Scriptures I like to quote. That keeps me motivated when I am about to go out on the competition floor. I would say little short prayers, quoting Scriptures: I can do all things through Christ, don’t fear, be courageous. Little things like that get me motivated.”

“Usually, before I salute the judge I’m able to just grab the event and I pray on it and that really grounds me. For some reason, once I do that, I am able to think clearly and I’m able to calm down right before I compete.”

“I’ve been blessed with tremendous gifts, and it’s my job to use those gifts to inspire others. As a man of faith, I take great responsibility in being a good steward of my talent. God has created unique … avenues to allow me to glorify him.”

“Trust in the Lord. I asked him not to blow out my back and I was very happy that it didn’t happen.”

“It is time that we take a deep look at our ability to be compassionate and empathetic to those suffering from the problems that are deep within our society.”   Moore signs autographs with Colossians 3:23: “Whatever you do, work at it with all your heart, as working for the Lord.”

“You see, the most amazing thing about having faith and believing is that once you give yourself to the Lord, you are able to live freely. You no longer need to worry about what has happened, what might happen, or what you want to happen; you simply need to be a good person and work hard, because you know God has a plan for you.”

“Volleyball has been a major way God communicates life lessons to me. They go hand-in-hand; what I’m learning on the volleyball court I am able to apply in life and vice versa.”

“It’s been a big thing for me to understand that my joy and my peace do not revolve around my performance or how I do compared to other people. My joy comes from the fact that I am playing a game I love and that he created me to play.”

“Once I put winning in God’s hands, I stopped worrying about that. I just went to tournaments and shot with no fear, doing only the best I can do and leaving the rest up to God.”

“I am strong because of my faith.  I’m a Christian. I believe everything I have is a gift and a blessing.”

If you don’t receive our emails, sign up to get articles in your inbox.