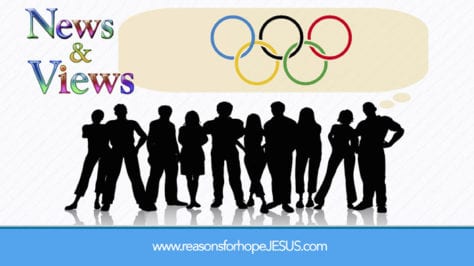 As the summer olympics begin on August 5, 2016 in Rio de Janeiro, Brazil, let’s pause to think about the history of the event, the purpose of the competition, the nature of the games and how we can make a “go-for-gold” difference in the outcome of these games.

Frenchman Pierre de Coubertin founded the Olympics in 1896. The first summer games were held in Athens, Greece and attracted 245 competitors.  More than 200 of the competitors were from the host nation of Greece, and all were male.  With only 14 countries represented it was a small start. Yet it was the largest international sporting event to have ever taken place.  The 1896 Olympics were a great success drawing the largest crowd ever for a sporting event.

Only four years later, as the world ushered in a new century, the Paris Summer Olympics had four times as many athletes, with women also participating. The success of the 1924 Summer Olympics brought about the creation of the Winter Olympics.  Over the course of the first half of the 20th century, the Olympic Games grew.  And in the last half of the century, with the introduction of television, the games were viewed in homes around the world.  The first games broadcast world-wide were the 1964 games in Tokyo, Japan. The most recent Olympic games were the 2012 Summer Olympics in London.

The Purpose of the Competition

Pierre de Coubertin  created the Olympics to be an international sporting competition that would foster unity and understanding among people of the world.  What a wonderful goal!  We can all agree that the Olympics have done that…at least to some extent.  But as with any endeavor, success is not without problems.  For the Olympics, the world has greatly impacted and influenced the nature of the games.

The Nature of the Games

Over the years the nature of the games has varied according to political, economic and social conditions of the host country and the state of the world at the time.  The 1916 Summer Olympics were cancelled because of the onset of World War I.  Although the 1920 Antwerp games drew a record number of competitors, it was not the event hoped for because of the conditions in war-torn Belgium.  The roaring 20s had the 1924 Paris games that broke the record again with 3,000 competitors. The 1928 Amsterdam games introduced notable changes reflecting cultural influences including female athletes in track and field competitions and sponsorship of the games by Coca-Cola. But in the 1932 Los Angeles games, the toll of the Great Depression was evidenced by the fewest competitors since the 1904 St. Louis games. 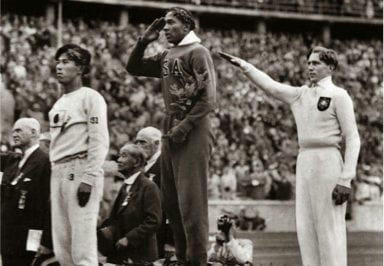 Eighty years ago, in the 1936 Berlin Germany Games, the social conditions (especially ethics and morals) of the host nation created great controversy.  The ruling Nazi party tried to use the games to promote its Aryan racial ideology, which included a belief that those of African descent were an inferior race.  With Hitler over-seeing the games, the athletes competed in the presence of evil.  However, when American Jesse Owens won four gold medals and 100,000 Berliners chanted  “Jes-say O-vens,” the racial ideology was silenced…if only for a short time.

Likely to surprise many, is that Owens and his black teammates were treated well during the Olympics by the German people.  They experienced some freedoms in Nazi Germany that they seldom enjoyed in their own racially-segregated country. The Olympic Committee took great effort to counter the Nazi party’s attempts to use the games for its political agenda.  The Olympic village was integrated and distribution of racist propaganda was strictly controlled.  Owens even reported being able to travel and lodge with whites, something he was unable to do in the US at that time.

Jesse Owens represented his country well.  He won gold medals in four events: the 100 meters, 200 meters, long jump, and 4 × 100 meter relay. He was the most successful athlete at the 1936 games and his name became known around the world.  Jesse Owens has also been credited as having “single-handedly crushing Hitler’s myth of Aryan supremacy”¹ — at least in the eyes of the watching world and at least for a moment in time.  The evil ideology of Nazi Germany continued on for another nine years. Racial discrimination and segregation was still a beast that needed to be tamed.

Sadly, the Olympic accomplishments of Owens, and the honor that he brought to his country, did little to overcome racial discrimination in the United States.  After the games Owens stated, “When I came back to my native country, after all the stories about Hitler, I couldn’t ride in the front of the bus. I had to go to the back door. I couldn’t live where I wanted. I wasn’t invited to shake hands with Hitler, but I wasn’t invited to the White House to shake hands with the President, either. Hitler didn’t snub me – it was Roosevelt who snubbed me. The president didn’t even send me a telegram”.²

Another Evil, Another Hate

In 1945 the Nazi evil was defeated.  We can all agree that racial discrimination and segregation diminished after World War II, but evil and hate have remained a dark reality.  The darkest moment in Olympic History took place during the 1972 Munich Games, when Palestinian terrorists took Israeli athletes hostage and eventually killed 11 of them.

As the games begin in Rio de Janeiro,  terrorism looms large as a threat and a bleak reminder of the reality of evil and the depravity of man.  On July 21st, Brazilian police arrested 12  Islamic State sympathizers in the early stages of planning terrorist attacks at the games.  While this group was called “absolutely amateur — with no preparation,” Brazilian authorities assured people that they are exhaustively investigating all threats. The city and the Olympic Village remain on high alert, especially following the discovery of a jihadi messaging channel that called for its followers to target the Olympics.³

Remembering that de Coubertin’s purpose for the Olympic Games was to “foster unity and understanding among people of the world,” we mourn the reality of terrorism threats.   In many ways our world is growing less and less united, even though we have become more and more connected.  Connected is not the same as united.

As we join spectators around the world to watch and enjoy the Olympic games, and to appreciate the perseverance of the human spirit in healthy competitions, let’s determine to…

Go For The Gold!

John 14:27  “Peace I leave with you, My peace I give to you; not as the world gives do I give to you. Let not your heart be troubled, neither let it be afraid.”

Let’s seek God by praying for the safety of all involved in the games. Pray for those who compete and for those who are organizers and on-site spectators.  Pray for the city of Rio de Janeiro and the security forces that will work to protect every aspect of the games from any forms of violence or disruption.  And, most importantly, pray that God will change the hearts of those who might seek to harm others.

We can make a difference!

and let our prayers rise up to the Sovereign God of all things.