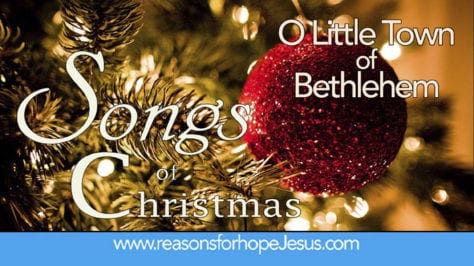 From the prophet Micah, God has blessed us with a great prophecy about the birth place of Christ.

Micah 5:2-4  “But you, Bethlehem Ephrathah, Though you are little among the thousands of Judah, Yet out of you shall come forth to Me The One to be Ruler in Israel, Whose goings forth are from of old, From everlasting.” Therefore He shall give them up, Until the time that she who is in labor has given birth; Then the remnant of His brethren Shall return to the children of Israel. And He shall stand and feed His flock In the strength of the LORD, In the majesty of the name of the LORD His God; And they shall abide, For now He shall be great To the ends of the earth;

Phillip Brooks, considered by many “a prince among preachers,” was born in 1835. On December 24, 1865, Pastor Brooks found himself far away from his Philadelphia congregation at Holy Trinity Church. He was in Palestine, the Holy Land. It was Christmas Eve, and from the city of Jerusalem, Brooks made the trek to the little town of Bethlehem. That trip, that night, was to have a profound effect on Pastor Brooks’ life.

Times were difficult for Brooks as he sought to minister to his congregation during the difficult days of the Civil War. And to add to that Brooks was the one asked to give the funeral message over President Abraham Lincoln, who had been assassinated. A man of only thirty some years, but the tumultuous days in which he ministered had taken their toll on him and it was evident in his worn appearance. It was in his trek to Bethlehem on that Christmas Eve that Brooks seemed to draw strength for his ministry.

Returning to America, Brooks enlisted the aid of his friend Lewis Redner to help him in building up the Holy Trinity Church’s outreach. Starting with thirty children and a somewhat small congregation, the two men built the ministry up to where over 1,000 children were attending Sunday School on Sunday mornings and the pews for the worship services were overfilled.

In 1868, looking to write something for the Sunday School, Brooks thought back to his Bethlehem journey. Drawing from that life-changing experience,  on Christmas Eve of 1868, he penned the poem “O Little Town Of Bethlehem.” With the aid of music being added to the words of the poem by his associate Redner, on Christmas morning, the great Christmas hymn was born

Surely this seasonal hymn has become a standard, one heard and sung in churches all around the world at this time of year. It is one that is familiar to all of us, Christian and non-Christian alike. Its words speak to the heart:  “So God imparts to human hearts, The blessings of His heav’n,” and offer hope to all people:  ” No ear may hear His coming, But in this world of sin, Where meek souls will receive Him still, The dear Christ enters in.”

John 1:12  But as many as received Him, to them He gave the right to become children of God, to those who believe in His name.

I can practically write this hymn from memory . . . it has been such a blessing to me over the years. I pray that it is a blessing to you also. Let us joyously say with Brooks and Redner, “O come to us, abide with us, our Lord Emmanuel.”

Have a good day . . . and as you walk through your day, recall to mind the prophecy of Micah and the fulfillment of that prophecy that took place that first Christmas in Bethlehem.