Sin, Iniquity and Transgression? How are they different? 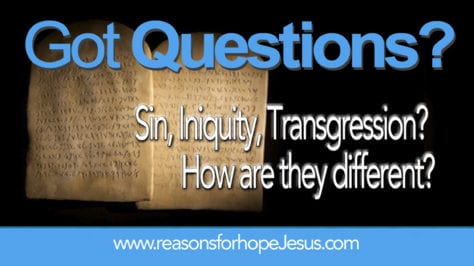 Sin is the most commonly used of these three terms.  Iniquity and transgression we seldom hear. But they are found in the Bible and all three are very important to understand… and even more important to avoid commiting.

In the Old Testament, the Hebrew words translated as sin, iniquity and transgression are chattah, awon, and pesha.

The word most often translated as sin is chattah.  Strong’s Hebrew Dictionary defines it as an offense (first used in Gen 4:7).  Sin can be both intentional (sins of commission) and unintentional (sins of omission). Sin is any thought, word, or action that is in disobedience to the will of God

The Hebrew word translated as iniquity is awon (Gen 15:16).  Strong’s defines it as perversity, i.e. (moral) evil.  Iniquity is a type of sin that is related to inner character. It is a moral uncleanness that is demonstrated and is often a very intentional twisting or defiance of God’s standard.

Sin is often defined as “missing the mark,” but  “missing the mark” is not a complete definition.  A skilled archer can “miss the mark” on his target and it’s not sin. He might still do very well by coming close.  If we use the definition of “missing the mark,” we must be clear that “the mark” missed is God’s “mark” — and His “mark” is perfection.  That means, in order to win the “prize,” we must hit it every time.  We must be perfect!  That IS what God demands (Mat 5:48). No one can do that. We sin — even when we try our best not to — and every sin is first and foremost a sin against God, because every sin is missing His “mark” of perfection.

J.I. Packer defines sin as “a universal deformity of human nature that is found at every point in every person; Sin is a spirit of fighting God in order to play God.”  Packer’s point that every sin is a way of “playing God” is true.  The very first sin in the world was a result of wanting to “be like God” (Gen 3:5).

Sin can be further defined as any thought, word, or action that conveys or displays something or someone to be more valuable than Jesus, because all sin is generated from three desires — the lust of the eyes, the lust of the flesh and the pride of life (Read: Are there only three sins? What are they?)

Sin is the most general term used for anything that “falls short of the glory of God” (Ro 3:23). We sin because we are born sinners, with the sin nature of Adam.

Rom 5:12  Wherefore, as by one man sin entered into the world, and death by sin; and so death passed upon all men, for that all have sinned.

We rejoice that Jesus died to pay the penalty for all our sins and we are eternally secure in Him. (Read Can I lose my salvation?)

Acts of iniquity meet a deeply rooted sinful need or desire.  David’s sin with Bathsheba is an example of iniquity.  His fleshly desires led to adultery and murder (2 Samuel 11:3–4; 2 Samuel 12:9).  When David was convicted of his sins, he cried out in repentance, “Wash me thoroughly from mine iniquity, and cleanse me from my sin” (Psa 51:2)

Iniquity in the Bible is contrasted as the opposite of righteousness, which we know is what God desires from His people.

Psa 24:4  He that hath clean hands, and a pure heart; who hath not lifted up his soul unto vanity, nor sworn deceitfully.

Psa 24:5  He shall receive the blessing from the LORD, and righteousness from the God of his salvation.

Ezek 44:23  And they [the priests] shall teach my people the difference between the holy and profane, and cause them to discern between the unclean and the clean.

We rejoice because we have the righteousness of Christ imputed to us, and making us clean and worthy in God’s eyes. (Read What are the Doctrines of Imputed, Infused, and Imparted Righteousness?  The Gift of SalvaTION: Justification & Imputation)

If sin is defined as “missing the mark,” then transgressing can be defined as “crossing over a boundary.”  Just like the definition “missing the mark,” “crossing over a boundary” must be understood properly.  It’s much more than just parking in a no parking zone. It’s more like parking in a no parking zone, knowing the judge who enforces the laws is watching you. Transgressing against God is making a choice to do something of which God has established clear boundaries — and willfully doing so. It’s proceeding without caring.

Trespassing is similar to transgressing.  It is also “crossing over a boundary,” which we understand well because of man’s laws of tresspassing. Trespassing can also mean “to fall away after being close beside” and it can be intentional or unintentional. Peter trespassed when he denied Jesus (Luke 22:34, 56–62). And we all transgress and trespass, “crossing the line” in thought, word, or deed, many times a day.

We rejoice that God will forgive us, so we should be quick to forgive others who do the same (Matthew 6:15). (Read: What Happens If I Continue To Sin?

It’s sometimes difficult to distinguish what is a sin, an iniquity, or a transgression/trespass. The distinctions are very subtle, but the similarities are very clear and evident. All are sin, and, more they are much more than simply “missing the mark,” satisfying lustful, fleshly desires, or “crossing the line.”  All sins separate us from God. For the unsaved, they are totally separated by sin and they lack of any type of union with God. For Christians, ongoing sin puts a distance between them and God. While they are eternally secure in their union with God (Read What is eternal security/assurance of salvation?), their communion with Him will suffer because of sins, iniquities, and transgressions.

We rejoice that God will forgive us and wash us of all sins (1John 1:9 — Read What is the Christian “Bar of Soap?”)

Conquering Sin In Our Sanctification Journey:

What you need to know about Sanctification & Glorification
How Do I Fight Impure Thoughts?
Will impure thoughts condemn me? How can I fight them?
Can Satan put thoughts in our minds? How can I tell if sinful thoughts are coming from me or Satan?
Is My Heart Deceitful Above All Things? (Jer 17:9) Don’t I Have a New Heart?
Sin, Iniquity and Transgression? How are they different?

The Doctrines of Salvation: