The Greatest? Muhammed Ali or Another? 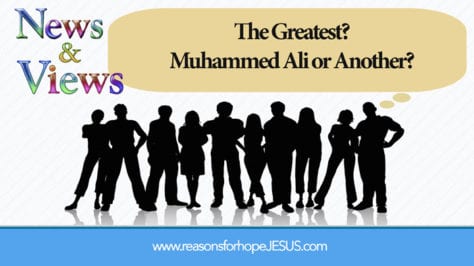 From Matthew’s gospel we read,

If you’ve missed the fact that boxing legend Mahammad Ali has recently passed away, then you might be without any form of media to your name.

Yes, the legendary boxer has passed on into eternity and the current hype around his person is, to this writer, a bit overwhelming. The media is actually saying that Ali was “The Greatest”(a title that Ali never hesitated in proclaiming for himself) that ever lived! He is praised and lauded by people from all over the world, proclaimed to have been “a great man . . . a great humanitarian . . . a model for humanity . . . a great example for children to follow” . . . etc., etc., etc. It was said by a particular person recently on the Fox News Channel that every politician would do well to associate themselves with the observances being afforded Ali for it would serve to go a long way in shedding a favorable light on them in this election year. Since one is titled, “The Greatest,” that would seem to be good practical advice.

I lived in this man’s era. Growing up in a home that was plagued by prejudice, and a home where professional boxing was held in high regard, he was not one that found favor in my father’s eyes. And his arrogant (that’s right, I said “arrogant”) manor only made it worse for those of my family, those that chose to think people with a different skin color were inferior. We were not a Christian home, so finding disfavor with Ali was easily achieved.

When Ali (having been born Cassius Marcellus Clay) stepped into the limelight as a heavyweight boxing contender and won the heavyweight title from one Sonny Liston in 1964 the door was opened for boastful rhetoric that would span many years. This boasting at first seemed to irritate the masses and became especially bothersome when he refused to answer his country’s call for military service in 1966. Citing religious reasons (he had embraced the religious faith of the Nation Of Islam) and a personal opposition to the Viet Nam War, Ali bucked the draft system. As a note, he was arrested, found guilty of draft evasion and stripped of his boxing titles (Wikipedia).

I might add here that I always had a problem with Ali’s actions. Not because of the color of his skin, for I never embraced my family’s prejudicial attitudes. No, not because of skin color, but because at that very time, July of 1966, I reported to active duty in the U. S. Navy. His boasting was more than I could handle and his arrogance toward the military and military service never ceased to bother me. They became to me stumbling blocks to me ever joining the ranks of those who so readily found favor in him, both then and now.

Later on Ali would somehow find acceptance with those in our nation and with those around the world. He was actually called “An Ambassador” to the world. As America changed, as she embraced more and more a different culture, a different standard for behavior, as what was right began to be questioned and what was wrong began to find favor, in the midst of all of this Muhammad Ali became accepted and was favorably permitted by society to proclaim that he was “The Greatest.”

Someone in the news forum yesterday actually said that Ali might be one of the three greatest people to ever have lived. Oh my . . . .

I take exception to the reference that Muhammad Ali is “The Greatest.” And that exception is based on what Jesus the Christ said about a man named John the Baptist. In our aforementioned text from the gospel of Matthew Jesus proclaimed that,

• ” . . . among those born of women there has not arisen anyone greater than John the Baptist”

And considering the words of the God/Man, one only needs to take the time to look at the context of Matthew, chapter 11, and in John the Baptist find the true definition of greatness. If you endeavor to do so, you will see characteristics that bear witness of what God would describe as great and in that process come to a realization that these characteristics were not part of the make-up of Muhammad Ali.

In closing I would make note that those of The Nation of Islam, to which Muhammad Ali served faithfully until his earthly end, do not accept that Jesus is the Christ, the God/Man. They do not receive Him nor proclaim Him as Lord and Savior and in their belief system do not embrace His very Person and work as the only way by which a man can be reconciled to God.

If such is true then Muhammad Ali should not be proclaimed “The Greatest,” not by a long shot! He should not be heralded as “a great example for children to follow,” for it would lead them away from the true message of God in Jesus Christ, the message that John the Baptist gave witness to.  It has been said that Ali’s religious belief system “defined him.” That would put him in direct opposition to the gospel of Jesus Christ that defined John, a man Jesus said no one was “greater than.”

May the Word of Truth be your standard for discerning whether or not what men say is true or false.

The Top Ten Power of Hope articles in 2015