The Mayflower Compact, written November 11, 1620,  was originally titled Agreement Between the Settlers of New Plymouth. It was the first governing document of the Plymouth Colony. It was written and signed by 41 male passengers who were separatist Puritans, adventurers, and tradesmen.  The Puritans journeyed to the new world to escape religious persecution by King James I of England.

The original document has been lost but the words remain. 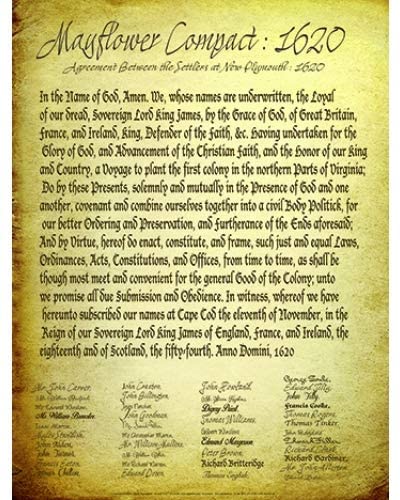 In the name of God, Amen. We, whose names are underwritten, the loyal subjects of our dread Sovereigne Lord, King James, by the grace of God, of Great Britaine, France and Ireland king, defender of the faith, etc. having undertaken, for the glory of God, and advancement of the Christian faith, and honour of our king and country, a voyage to plant the first colony in the Northerne parts of Virginia doe by these presents solemnly and mutually in the presence of God and one of another, covenant and combine ourselves together into a civill body politick, for our better ordering and preservation, and furtherance of the ends aforesaid; and by virtue hereof to enacte, constitute, and frame such just and equall laws, ordinances, acts, constitutions and offices, from time to time, as shall be thought most meete and convenient for the generall good of the Colonie unto which we promise all due submission and obedience. In witness whereof we have hereunder subscribed our names at Cape-Codd the 11. Of November, in the year of the raigne of our sovereigne lord, King James, of England, France and Ireland, the eighteenth, and of Scotland the fiftie-fourth. Anno Dom. 1620.

Unprepared for that first winter, 44 of the original 102 colonists died. But the spring brought hope, they planted and the summer brought crops.  By the first anniversary of their arrival in New Plymouth, their food supply was bountiful. On December 13, 1621, Governor William Bradford issued a decree that the next three days be “Set aside as a day of feasting and prayer showing our gratitude to almighty God for all His benefits.”

In 1920, on the 300th anniversary, Governor Calvin Coolidge (US President 1923-1929) commemorated the Mayflower landing with the following word:

The compact which they signed was an event of the greatest importance. It was the foundation of liberty based on law and order, and that tradition has been steadily upheld. They drew up a form of government which has been designated as the first real constitution of modern times. It was democratic, an acknowledgment of liberty under law and order and the giving to each person the right to participate in the government, while they promised to be obedient to the laws.

But the really wonderful thing was that they had the power and strength of character to abide by it and live by it from that day to this. Some governments are better than others. But any form of government is better than anarchy, and any attempt to tear down government is an attempt to wreck civilization.