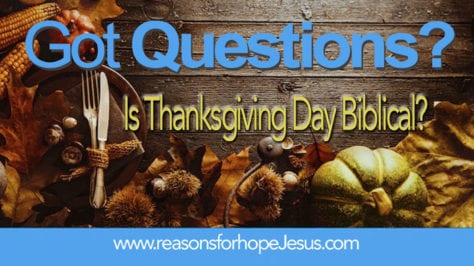 Legend and history tell us that what we call Thanksgiving Day originated with the Pilgrims.  They were English settlers who came to the shores of modern Provincetown on the tip of Cape Cod in November 1620.  There they established a colony and prepared to face a harsh winter.  Sadly, during that first winter, nearly half of all the colonists died.  The Pilgrims had been unprepared for the difficult winter and had been without sufficient provisions. Through prayer, and with the help of the region’s Indians, the following spring the Pilgrims worked hard and planted crops. Summer and autumn brought an abundant harvest.  On December 13, 1621, the Pilgrims instituted a three-day feast of thanksgiving to God and celebrated with their Indian friends.

Is Our Observance of Thanksgiving Day Biblical?

Clearly, our national holiday of Thanksgiving Day is not a holiday established by biblical precept.  However, the Bible does not command us to celebrate many holidays found on modern day calendars.  Most holidays are man-made days of celebration and have no biblical foundation.

Now, don’t get me wrong.  There is nothing wrong with celebrating holidays and special events in our lives as long as the celebrations are done in a way that honors God.  We have liberty to participate in non-biblical activities as long as they do not involve sin.

While Christmas and Easter are all about Jesus, we are not commanded to celebrate either.  However, when Christmas and Easter festivities involve activities that honor God, they are appropriate celebrations.  Such activities include focusing on Jesus—His birth at Christmas and His death, burial and resurrection at Easter—and enjoying God-honoring fellowship with family and friends.  If we center our thoughts and activities in that way, these holidays are extremely beneficial for our spiritual growth.

What About Thanksgiving Day?

Giving thanks to God is, of course, very biblical and God-honoing.  Therefore, every day should be a Thanksgiving Day.  Our special, set-aside day for Thanksgiving Day does have a biblical precedence.  In the Bible, The Jews had days set apart for celebration.

In the Levitical feasts of ancient Israel, there were three mandatory festivals. During these times Israelites journeyed to Jerusalem to celebrate and worship.  Each feast was a recognition of God’s abundant provision in their harvests of crops. The spring festival, known as Passover, took place at the time of the barley harvest. The late spring/early summer festival was the Feast of Weeks—50 days following Passover.  It took place at the time of the wheat harvest.  The fall festival, the Feast of Tabernacles, celebrated the fruit harvest—particularly the harvest of grapes because of Israel’s extensive use of the fruit for its oil and juice.

Each of the festivals was called the “Lord’s appointed times”  given by the Lord with explicit instructions of how each festival was to be celebrated.  Each festival had a prescribed offering of the first fruits of the harvest, which were offered to the Lord by the priest.  This was to call to mind that their harvests were a gift from God and it served as a way of giving back to God in thanksgiving for His provision, goodness, and grace.

We can see a similarity between this Levitical offering and the way the Pilgrims gave thanks for their bountiful harvest.  We also see this in our Thanksgiving Day.  It is a special day, set apart, to thank God for His provision of food and for all He provides in our lives. Therefore, in pattern and type, our Thanksgiving celebrations are biblically grounded in the lessons of Levitical feasts.

In pattern and type, Jesus is the Bread of Heaven and His broken body is to be remembered by the breaking of bread.  Jesus first offered His disciples the broken bread and then He offered the wine, representing His shed blood.  His body was broken in His physical suffering on the cross, and then His side was pierced and His blood poured forth.  The bread of the barley and grain harvests (Passover and Shavuot) represents the Lord’s body and the fruit of the vine from the grape harvest in the fall produced the wine that typified Jesus’ shed blood.  Wine was produced by the crushing of the grapes until the juices flowed.  Jesus also was “crushed.”  He was “bruised for our iniquities.” (Isaiah 53:5)

Typology like this is interesting to see the types and patterns in the Bible that point to Christ.  It’s also a wonderful revelation of God’s precision in revelation to His people; and it’s a fingerprint of the Holy Spirit’s perfection in His inspiration of the words of the Bible.

On Thanksgiving Day, and every day of the year, let’s remember that before we give thanks for the abundance we have received from God, to first give thanks for who God is.  He is the Abundant Giver of every good and perfect gift (James 1:17)—and the most perfect gift of all is Jesus.  Praise Him!

I will praise the name of God with a song, and will magnify him with thanksgiving.