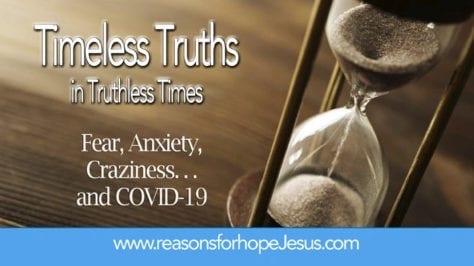 The other day while shopping at the local Wal-Mart I watched as people scurried to fill their hands and arms with packages of toilet paper. Shopping carts were filled with multiple packages of what appears to have become an essential item, exhibiting a mind set of the more you have the better off you are. And despite the call by our local and federal leaders to not horde items, that there are no potential shortages of needful items (especially toilet paper), people are not heeding such counsel but reacting with minds that are not able to act rationally. Fear and anxiety have gripped our nation and the evidence of this is seen all around us and people are not acting with a sound mind.

(BTW…the toilet paper madness is because people have believed a false narrative, that we get all our paper from China. Not true.)

I witnessed one man placing packages under his arms while fisting another package or two of toilet paper. His eyes showed, what I believe, was evidence of fear and anxiety. That’s right; fear and anxiety. Anxiety because he obviously had to get what he was after and was most concerned as to whether it was even available. Fear  because, I would guess, he could have maybe expected some possible challenge to him being able to achieve his goal to get as much toilet paper as he could carry. If the current situation in our nation wasn’t such a serious one this man and what he was seeking to do would almost cause one  laugh. Or, it would even be thought extremely odd.

One lady came around the corner of one aisle and looked at me and my wife and in a most serious tone said, “This is crazy.”

This virus is causing a lot of emotional turmoil in our nation and around the world. The alarming spread, and the small window of time in which it has affected so many, is very real to each of us And it is very unsettling. Even though they are learning more about it each day, not enough is known and it is creating a frantic need!

I noted the craziness of this pandemic above, so let’s focus on fear and anxiety.  These are obvious human emotions that are playing out and doing so to a people who lack the divine counsel that the Word of God provides in times such as we are experiencing.

Let’s consider the similarities they possess and first look at the words themselves:

The similarities? Just consider the aforementioned definitions: “feeling/state” . . . “disquiet/uneasiness” . . . “apprehension.” And such emotions, such state of mind cause one to be “uncertain” and this leads to being “frightened.” Without a doubt, uncertainty can lead a person to a state of being frightened.

That said,  God’s Word should come to mind. It is a counsel that only those who know Jesus are able to reference and apply in times that try one’s emotions and actions.

You probably know them, but let me share His words of comfort in such times as we are experiencing  (take not of the underlined and bracketed emphasis).

The world doesn’t abide in the counsel of their Creator and so the rush to react in perilous times in an unprincipled and chaotic manner should not surprise us. Our responsibility is to respond to our heavenly Father’s Word. We should present an obvious difference in how we deal with the current pandemic that our nation is experiencing.

Certainly it is difficult to deal with change, especially when it is threatens our well-being. But as Christian we should not panic. We are not to react to COVIDE-19 as the world reacts. Rather we are to display to the world the very person of Jesus, manifesting actions guided by the counsel of His Word, actions not driven by fear and anxiety but actions steered by sound minds that do not allow such emotions to overtake us.

Just maybe we’ll be noticed. And just maybe someone will ask, “What makes you so different?” And we, who are of a sound mind, will start by responding, “I have Jesus. Let me tell you about Him and the peace He gives.”