“A House Divided Cannot Stand” Who Said That? 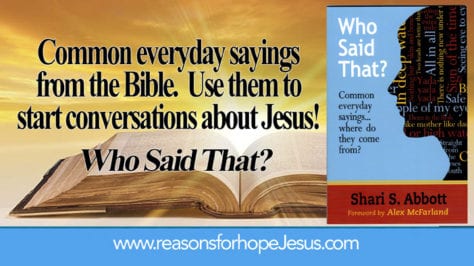 From the book, Who Said That?  by Shari Abbott

There are many pithy (concise and forcefully expressive) sayings that are used in everyday conversation.  Many people use them, but most people have no idea of their origins.  It should be no surprise that many of these sayings are found in the Bible. They long pre-date the time when the sayings came into use.  This shows how the Bible has always had great influence on man’s life, relationships, and even everyday language.  The fact that so many of these saying are still in use today underscores the timeless relevance of God’s Word.

The book, Who said that? Common everyday sayings…where do they come from? shares more than 140 sayings.

Get the book, learn the sayings, and then, the next time you hear one of these sayings, ask the question, “Who said that?”

This saying comes from Jesus’ words. It refers to a structure being divided, or broken, will be weakened to a point that it falls / fails.

Mark 3:25  And if a house be divided against itself, that house cannot stand.

The expression “a house divided” was used by Abraham Lincoln in an address prior to his presidency on June 16, 1858.  In that address, which came to be knows as “A House Divided Speech,” Lincoln said:

A house divided against itself cannot stand. I believe this government cannot endure, permanently, half slave and half free. I do not expect the Union to be dissolved — I do not expect the house to fall — but I do expect it will cease to be divided. It will become all one thing or all the other. Either the opponents of slavery will arrest the further spread of it, and place it where the public mind shall rest in the belief that it is in the course of ultimate extinction; or its advocates will push it forward, till it shall become lawful in all the States, old as well as new — North as well as South.  [“A House Divided,” Info USA, Us Department of State]

Read More: Who Said That?

The Book Who Said That?

Add this to an Easter Basket. Tuck it in a Christmas stocking. Give it as a hostess gift.  Or buy it for yourself to get equipped, BECAUSE... It's easy to start conversations, but it's not easy to make them about matters of spiritual importance.

Jesus commissioned us to tell others about who He is and the saving grace He offers.  Starting those conversations isn't always easy.  So we must learn to listen for opportunities to "turn-the-talk."  Hearing a common saying, or using one as you speak, opens the "door" to share the origin of the words in the Bible and to talk about the importance of the Bible and the Person who wrote it! 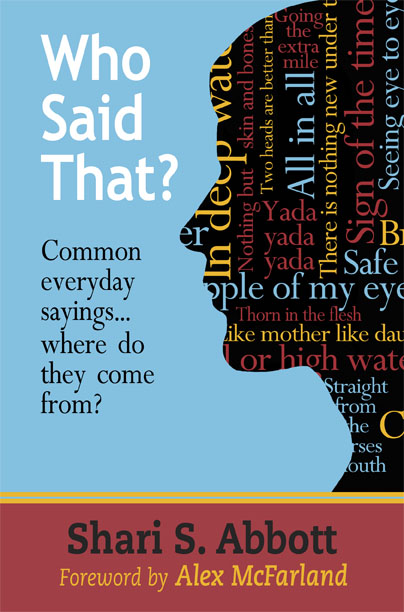 can also serve as a type of “tract” for your non-believing family and friends. It’s simply a look at the origins of sayings that we all use...until you get to the last few pages. The book closes with the saying, “Yada, yada, yada,” which means “you know, you know, you know.” The statement is then made: “God knows [yada] you” and the question is asked “Do you know [yada] Him?” The question is followed by a gospel presentation and an invitation to repent and trust in Christ, making this book a simple way to share the gospel with an unsaved (and often uninterested or unwilling-to-listen) friend.

All proceeds from products at the store go to support the ministry outreach of Reasons for Hope* Jesus.

About the Author:  Shari Abbott, executive director for Reasons for Hope* Jesus, is an avid Bible reader and teacher. She is passionate about equipping and encouraging Christians to know Jesus better and to love Him more. Shari is the author of the books, Why the Butterfly? A Book About Rightly Remembering, Remember Me – A Course In Rightly Remembering, Who Said That? Common Everyday Sayings, Got Questions? We have Reasons for Hope (Reasons Books 1, 2, 3 & 4), Fun with Shuns (biblical words ending in -tion), How to Witness to Jehovah’s Witnesses, Hear, See, Speak & Post No Evil, and Room with a View of Eternity (available at the Reasons for Hope*Jesus store or ebooks at Amazon).
If You Do NOT Know Jesus, Click NOW!