The Preciousness and Worship of the Lamb 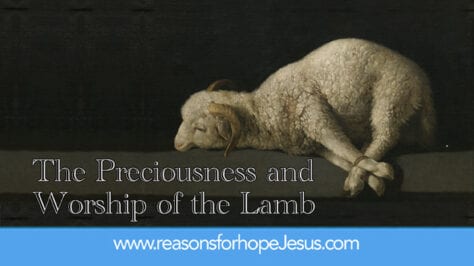 Jesus is the eternal Son of God. He is both fully God and fully man, and the personification of undiminished deity and perfect humanity. He is beautifully foreshadowed in the sacrificial lambs of the Old Testament and then wonderfully introduced as The Lamb of God in the New Testament.

In this article, we will consider the Preciousness and Worship of the Lamb. If you missed any of the previous articles, you can read them here:

The Preciousness of the Lamb

Why are we to be holy in our conduct? Because of the price of our redemption. It cost the precious blood of Jesus to redeem us. That should be our greatest motivation for living holy lives.

1 Peter 1:15, 18-19 “knowing that you were not redeemed with the corruptible things like silver or gold from your aimless conduct received by tradition from your fathers, but with the precious blood of Christ, as of a lamb without blemish and without spot.”

Bought with a Price

The apostle Paul said, “do you not know that your body is the temple of the Holy Spirit who is in you, whom you have from God, and you are not your own? For you were bought at a price; therefore glorify God in your body and in your spirit, which are God’s.” (1 Cor 6:19-20) That is the essence of redemption, to be bought with a price.

The definition of redemption is, “to be set free by paying a price,” or “to be purchased out of slavery/bondage.”  The Roman Empire had an estimated 60 million slaves in the first century and it was almost impossible to be freed. There were only two viable options; 1) The slave’s master could decide to set a slave free, or 2) The slave could save enough money to buy his own freedom.

An even rarer option would have been for a benevolent person to redeem a slave in an unsolicited act of kindness. Graciously buying a slave’s freedom by paying the full purchase price would have been an act of extravagant love and generosity. This is what God did for us spiritually.

The Bible teaches that we are all born in spiritual bondage.

That death is both physical and spiritual, resulting in eternal separation from the presence and paradise of a holy God.

Isa 53:6 “All we like sheep have gone astray; we have turned, everyone, to his own way.”

There was only one Person who was uniquely qualified to buy us out of the slave-market of sin, and that was Jesus Christ.

Rom 5:6-9… “For when we were still without strength, in due time Christ died for the ungodly. For scarcely for a righteous man will one die; yet perhaps for a good man someone would even dare to die. But God demonstrates His own love toward us, in that while we were still sinners, Christ died for us. Much more then, having now been justified by His Blood we shall be saved from wrath through Him.”

1 Pet 1:18-19 knowing that you were not redeemed with corruptible things, like silver or gold, from your aimless conduct received by tradition from your fathers, but with the precious blood of Christ, as of a lamb without blemish and without spot.

How precious is the blood of the Lamb, Jesus Christ? The blood of Jesus is indescribable, incalculable, immeasurable, impeccable, incomprehensible, inestimable, inexhaustible, inspirational, invaluable, invincible, irreproachable, and irresistible. And that’s just a few adjectives from one letter of the alphabet!

The blood of Jesus is precious, in that Jesus is:
1. one-of-a-kind (the only God/Man)
2. the only begotten Son of God
3. without blemish or spot.

The blood of Jesus is absolutely necessary because…

Heb. 9:22 “without the shedding of blood, there is no remission of sins”

And it had to be the shedding of Jesus’ blood because He is the one and only LAMB of God, with pure blood, who came to take away the sin of the world (John 1:29). An old hymn says, “What can wash away my sin? Nothing but the blood of Jesus!”

The Worship of the Lamb

And I saw in the right hand of Him who sat on the throne a scroll written inside and on the back, sealed with seven seals. Then I saw a strong angel proclaiming with a loud voice, “Who is worthy to open the scroll and to loose it seals?” And no one in heaven or on the earth or under the earth was able to open the scroll, or to look at it. So I wept much because no one was found worthy to open and read the scroll or to look at it. But one of the elders said to me, “Do not weep. Behold, the Lion of the tribe of Judah, the Root of David has prevailed to open the scroll and to loose its seven seals.”

And I looked, and behold, in the midst of the throne and of the four living creatures, and in the midst of the elders stood a LAMB as though it had been slain, having seven horns and seven eyes, which are the seven Spirits of God sent out into all the earth. Then He came and took the scroll out of the right hand of Him who sat on the throne. Now when He had taken the scroll, the four living creatures and the 24 elders fell down before the LAMB, each having a harp and golden bowls full of incense, which are the prayers of the saints. And they sang a new song, saying,

“You are worthy to take the scroll and to open its seals; for You were slain and have redeemed us to God by Your blood out of every tribe and tongue and people and nation, and have made us kings and priests to our God, and we shall reign on the earth.”

Then I looked, and I heard the voice of many angels around the throne, the living creatures, and the elders; and the number of them was ten thousand times ten thousand, and thousands of thousands, saying with a loud voice,

“Worthy is the Lamb who was slain, to receive power and riches and wisdom and strength, and honor and glory and blessing!”

“Blessing and honor and glory and power be to Him who sits on the throne, and to The LAMB forever and ever!’ Then the four living creatures said, “Amen!” And the 24 elders fell down and worshiped Him who lives forever and ever.”

What a crowd, consisting of peoples from every tribe, tongue, and nation! What a sight, as the One who is worthy to open and read the scroll steps forward. He is described as the Lion of the tribe of Judah, the Root of David, and as a Lamb as though it had been slain! What heavenly music, as the multitudes of creatures, angels, and saints around the throne burst out in singing praises to the Lamb…

You are worthy. And You were slain. You have redeemed us to God by your blood. And You have made us kings and priests to our God!”

What will we be doing in heaven? Worshiping the Lamb! Singing to the Lamb! Falling down on our faces before the Lamb! And what will we be singing about? How He redeemed us with His precious blood.