The Crucifixion and Resurrection of the Lamb 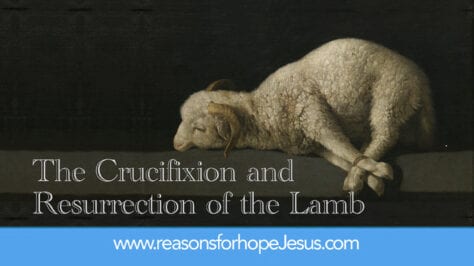 In previous articles, we’ve covered the Necessity and Provision, Slaying and Character, and Personality and Identity of the Lamb. Now, the Crucifixion and Resurrection of the Lamb.

Let’s begin with a story about an early American settler who journeyed westward toward the setting sun in what is now the state of Arizona. When he came to the rim of the Grand Canyon, his jaw hung open in amazement. Staring out over the vast expanse, he said, “Something very significant happened here!”

We have come to the “Grand Canyon” of Christian faith and theology.  With reverence and awe, we set our spiritual eyes on Mount Calvary, the old rugged Cross, the empty tomb, and the risen Lord.

Throughout most of the Old Testament under the Mosaic Law, the blood of innocent animals was the required sacrifice for the atonement of sin. Most often it was an adult, male lamb that was spotless and without blemish. However, the prophet Isaiah foretold of a coming day when the sacrificial Lamb would be a Person, a Man of Sorrows, acquainted with grief. This Person would be despised and rejected and would be led as a lamb to the slaughter. The Lord God would lay upon Him the iniquities of us all (Isa 53:1-10).  This was the amazing revelation of the Personality of the Lamb.

Centuries later, the last Old Testament prophet, John the Baptist, identified this Person as the Lamb of God.  When John saw Jesus coming toward him, he proclaimed, “Behold the Lamb of God, who has come to take away the sin of the world ” (John 1:29)  So John revealed the identity of the Lamb, and it was none other than Jesus Christ of Nazareth.

Matthew 27 is the third-longest chapter in the New Testament. It covers what must have seemed like the longest day in the lives of the disciples as they saw their Lord and Master repeatedly interrogated, mocked, beaten, blindfolded,  stripped, carrying his cross, and finally nailed to that cross.

Matthew 27 records Jesus fulfilling all Old Testament prophecies about His death.  The chapter tells of Jesus being:

He bore our vile iniquities, became sin for us, endured the full cup of God’s wrath against our sin, and hung on the cross in oppressive darkness.  He was forsaken by His Father and deserted by His friends and family (vs. 45-46).

This is a very grim picture of the darkest day in human history, but one cannot fully appreciate the resurrection unless one has felt the agony of the crucifixion. One can’t fully appreciate the empty tomb unless one has apprehended the pain of Calvary and the gloom of the grave. The thrill of Christ’s victory is even sweeter when one has experienced the agony of His death.

“Lift up your heads, ye sorrowing ones, and be ye glad at heart! For earth’s saddest day and gladdest day are just three days apart!” —   Susan Coolidge

The Resurrection of the Lamb

Matthew 28:1-8… “Now after the Sabbath, as the first day of the week began to dawn, Mary Magdalene and the other Mary came to see the tomb.  And behold there was a great earthquake; for an angel of the Lord descended from heaven, and came and rolled back the stone from the door, and sat on it.  His countenance was like lightning, and his clothing as white as snow.  And the guards shook for fear of him, and became like dead men.

“But the angel answered and said to the women, ‘Do not be afraid, for I know that you seek Jesus who was crucified.  He is not here; for He is risen, as He said. Come, see where the Lord lay; and go quickly and tell His disciples that He is risen from the dead, and indeed He is going before you into Galilee; there you will see Him.  Behold, I have told you.’  So they went out quickly from the tomb with fear and great joy, and ran to bring His disciples word.”

Jesus is alive!  And because He lives, we also shall live!

Hope and Confidence in a Risen Lord

Job had hope and confidence in a living Lord.  He knew that he would one day see his Redeemer.

Job 19:25 “For I know that my Redeemer LIVES, and He shall stand at last on the earth; and after my skin is destroyed, this I know; that in my flesh I SHALL SEE GOD, Whom I shall see for myself; and my eyes shall behold and not another.”

This same hope and confidence moved Alfred H. Ackley to write the hymn, “He Lives.”

The apostle Paul had this same hope and confidence.  He wrote to the church at Philippi:

And to Titus, Paul wrote:

Titus 2:12-13  …we should live soberly, righteously, and godly in the present age, looking for the blessed hope and glorious appearing of our great God and Savior Jesus Christ,

Are you in the midst of a trial?  Remember Job, who even at his lowest point was able to take courage in the certain hope of one day being resurrected and seeing his victorious Redeemer!  Remember Paul, who was able to face persecution and martyrdom because of his confident expectation that to be absent from the body was to be present with the living Lord!  And, remember: the tomb is empty!  Jesus is alive!  And because He lives, you also can live!

God sent His Son, they called Him Jesus; He came to love, heal and forgive:
He lived and died to buy my pardon; an empty grave is there to prove my Savior lives!
Because He lives, I can face tomorrow, Because He lives, all fear is gone.
Because I know He holds the future; and life is worth the living, just because He lives!
—  Bill and Gloria Gaither