The Necessity and Provision of the Lamb 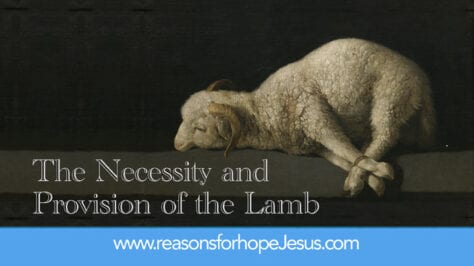 King David said of God’s Word, “The Law of Your mouth is better to me than thousands of coins of gold and silver” (Psalm 119:72).   Scripture has an inestimable value.  But what is the main theme of the Bible? It is God’s plan of redemption unfolded from Genesis to Revelation.  From the beginning, God has been reaching out to fallen man and offering him forgiveness and salvation.  There are two great subjects revealed in the 66 books of the Bible…the Love of God and the Lamb of God.  And the necessity and provision of both are revealed throughout the pages of Scripture.

Genesis 3 records the sad story of the Fall of humankind into sin.  Adam and Eve had been created perfect and had been living in a perfect world.  God gave them only one restriction.  They were not to eat of the Tree of Knowledge of good and evil.  Sadly, they blew it!  They sinned and death entered all creation.

Romans 5:12 Therefore just as through one man {Adam}, sin entered the world, and death through sin, and thus death spread to all men, because all have sinned.

After they sinned, Adam and Eve attempted to cover themselves with fig leaves. But that was not sufficient. Then, God killed a lamb and clothed them with the skins of that innocent lamb.

Genesis 3:21  Unto Adam also and to his wife did the LORD God make coats of skins, and clothed them.

Soon after their fall and expulsion from the Garden, Adam and Eve had two sons. Unlike their parents, they were not created in innocence.  They were born in sin (Gen 5:3) and needed forgiveness.  When he time came for Cain and Able to worship God, Cain, who was a farmer, brought a sacrifice of the fruit of the ground.  Abel, who was a shepherd, brought a lamb.  God accepted Abel’s sacrifice but not Cain’s.  In a jealous rage, Cain killed Abel.

The lesson is the necessity of a lamb.  We know from Genesis 3:21 (above), Leviticus 5:11-13, and Heb 9:22 that sin demands a blood sacrifice—and the most common animal sacrificed in the worship of God was a lamb.

Chapters 3 and 4 of Genesis are the beginning of what some theologians call “the scarlet (blood red) cord of redemption.”  This scarlet thread can be traced throughout Scripture.

The Provision of the Lamb- Genesis 22

Genesis 22:1-2 Now it came to pass after these things that God tested Abraham, and said to him, “Abraham!” And he said, “Here I am.”  Then He said, “Take now your son, your only son Isaac, whom you love, and go to the land of Moriah, and offer him there as a burnt offering on one of the mountains of which I shall tell you.”

This was clearly an indescribably severe and difficult test!  Remember, Abraham did not have a Bible.  He did not have another prophet to mentor him.  And he did not have a pastor or local church to counsel or pray with him.  This was between him and the Most High God.  His God, who had given him and Sarah the son of promise (Isaac), had suddenly asked Abraham to sacrifice his beloved son?  This seems unthinkable to us and it was likely even more so to Abraham!

Genesis 22 is an emotional passage, especially for those of us who have children.  It’s hard to read the chapter without feeling the heart pain of Abraham.   But what did Abraham do?

Genesis 22:3  “So Abraham rose early in the morning and saddled his donkey, and took two of his young men with him, and Isaac his son; and he split the wood for the burnt offering, and arose and went to the place of which God had told him.”

This was unquestioning obedience.  Abraham obeyed, believing that he would follow God’s command and sacrifice his beloved son Isaac! On the way to Mt. Moriah, we are told:

Genesis 22:6-8  “So Abraham took the wood of the burnt offering and laid it on Isaac his son; and he took the fire in his hand, and a knife, and the two of them went together.  But Isaac spoke to Abraham his father and said, ‘My father.’ And he said, ‘Here I am, my son.’  Then he [Isaac] said, ‘Look, the fire and the wood, but where is the lamb for a burn offering?’  And Abraham said, ‘My son, God will provide for Himself the lamb for a burn offering,’ so the two of them went together.’”

Heb. 11:17-19  “By faith Abraham, when he was tested, offered up Isaac…concluding that God was able to raise him up, even from the dead, from which he also received him in a figurative sense.”

He was clearly a man of immense and explicit faith in the one true God!  He did not understand how or why his Heavenly Father would promise and miraculously provide Sarah and him with a son in their old age, and then ask that he sacrifice that son. This was the son of whom the Lord had said He would make a great nation whose number would be greater than the grains of sand on the seashore! Without understanding, Abraham believed and trusted that the sovereign God who could cause Isaac to be supernaturally conceived, could also raise Isaac from the dead to fulfill His promises. It is no wonder that God chose Abraham, a man of great faith, to be the Father of the Jews.

Genesis 22:9-12 tell of the spell-binding drama of Abraham and Isaac on Mt. Moriah.  Abraham built an altar, placed the wood, then tied up his beloved son and placed him on the altar.  Then Abraham took the knife to slay his precious child.   But that’s when God intervened!

Genesis 22:1   “…The angel of the Lord called to him from heaven and said, ‘Abraham, Abraham… do not lay your hand on the lad or do anything to him, for now I know that you fear God, since you have not withheld your son, your only son from Me.’”

God spared Isaac, and provided a “ram caught in a thicket” (Read Why Was a Ram Sacrificed in Genesis 22 Instead of a Lamb?)  That ram was the sacrificial lamb that died in Isaac’s place.  This is a wonderful picture of the Lamb who would one day make the ultimate substitutionary sacrifice and die in our place, for our sin.  And that is the crux of the Gospel message.

Abraham did not have the written Word of God as a we do. When we are faced with a difficult test, Scriptures gives us guidance and comfort.  We might think of:

1 Cor. 10:13  “There has no temptation/testing overtaken you except such as is common to man; but God is faithful, and will not a you allow you to be tempted beyond what you are able, but with the temptation/testing, will also make the way of escape, that you may be able to bear it.”

Philippians 4:13  “I can do all things through Christ who strengthens me.”

Romans 8:28  “And we know that all things work together for good to those who love God, to those who are the called according to His purpose.”

Those verses and many others give us great strength for the day and hope for tomorrow.

The Necessity and the Provision

In the first book of the Bible, we see the very foundation of God’s wonderful plan of redemption. A lamb is necessary to pay for man’s sin (Genesis 3:1-4:7), and God provided, for Abraham, a lamb to die in Isaac’s place (Gen 22:13). This event was a foreshadow of God giving His Son to die in our place and to be our Redeemer and Savior.  Ponder these words from the hymn writer William R. Featherston (1864):

My Jesus, I love Thee, I know Thou art mine; for Thee all the follies of sin I resign;
My precious Redeemer, my Savior art Thou; if ever I loved Thee, my Jesus tis now!

I love Thee because Thou has first loved me, and purchased my pardon on Calvary’s tree;
I love Thee for wearing the thorns on Thy brow, if ever I loved Thee, my Jesus tis now.