The Personality and Identity of The Lamb 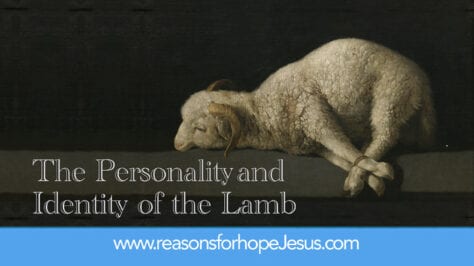 The theme of scripture is Redemption, and the “scarlet thread” of redemption can be seen weaving its way through all 66 books, from Genesis to Revelation. The best-known symbol of redemption is a lamb. And so far, we have focused on The Provision and Necessity of the Lamb, and The Slaying and Character of the Lamb.  In ancient Israel, the cost of redemption (the forgiveness of sin) was the shedding of the blood of an innocent, spotless lamb that would die as a substitute in the place of each individual.

Until the ministry of the prophet, Isaiah, (approximately 650 B.C.), the sacrificial lamb was only and always thought of as an animal, a sheep from the flock. There were hints of things to come in several Old Testament books, especially the Psalms, but God, through His prophet Isaiah, gave a further revelation of His unfolding plan of redemption.  From Isaiah, we learn of the personality of the Lamb who one day would come.

Isa 53:1  Who has believed our report? And to whom has the arm of the LORD been revealed?

Isaiah wrote, “Who has believed our report?”  As it turns out, not many.  “And to whom has the arm of the Lord been revealed?”  As it turns out, revealed to everyone.  Then the prophet wrote describing this Person who would one day come (take note of the personal pronouns).

For He shall grow up before Him as a tender plant, And as a root out of dry ground. He has no form or comeliness; And when we see Him, There is no beauty that we should desire Him. {3}  He is despised and rejected by men, A Man of sorrows and acquainted with grief. And we hid, as it were, our faces from Him; He was despised, and we did not esteem Him. {4}  Surely He has borne our griefs And carried our sorrows; Yet we esteemed Him stricken, Smitten by God, and afflicted.

{5}  But He was wounded for our transgressions, He was bruised for our iniquities; The chastisement for our peace was upon Him, And by His stripes we are healed.  {6}  All we like sheep have gone astray; We have turned, every one, to his own way; And the LORD has laid on Him the iniquity of us all. {7}  He was oppressed and He was afflicted, Yet He opened not His mouth; He was led as a lamb to the slaughter, And as a sheep before its shearers is silent, So He opened not His mouth.

No one can deny that Isaiah was prophesying about a PERSON. Isaiah used nearly 50 pronouns in this chapter as he laid out a remarkably specific description of the Messiah who would come almost 700 years later. The Messiah would come as a humble Man, a compassionate Friend, a despised Teacher, and a suffering Servant.  So we see in no uncertain terms the Personality of the Lamb.

Isaiah didn’t know exactly about whom he was writing, but there can be no doubt that the day was coming when the Lamb of God would be revealed as a Person!  And in the New Testament, John the Baptist did just that.

The Identity of The Lamb

Finally, after thousands of years since the fall of Adam that plunged the world into sin and death, God revealed the Person who would fulfill His plan of redemption.  The last of the Old Testament prophets and the forerunner of Jesus was John the Baptist. He introduced Jesus with this acclamation:

John 1:29-30 The next day John [the Baptist] saw Jesus coming toward him and said, “Behold! The Lamb of God who takes away the sin of the world!  This is He of whom I said, after me comes a Man who is preferred before me, for He was before me.”

Jesus loved us so much that He left Heaven and came to earth to:

Thank God, He has revealed the Personality and Identity of the Lamb… and it is JESUS!!

There is a Redeemer, Jesus, God’s own Son;
Precious Lamb of God, Messiah, Holy One.
Thank you, O my Father, for giving us Your Son;
And leaving Your Spirit till the work on earth is done.
(by Melody Green)