Is Repentance a Work? 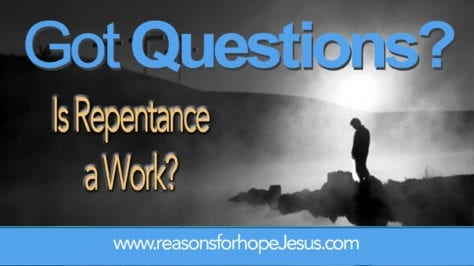 The Bible clearly tells us that we are saved by the grace of God, not by our works (Ephesians 2:8).  So the answer is, “NO, repentance is not a work.”  Sadly, the misunderstanding of this word has led many to reject the need for repentance in salvation because they define repentance as “turning from sin,” and call that a work.  “Turning from sin” is technically not what the word means.

In the Greek, the word for repentance (repent) is metanoia and it means a change of mind. Strong’s Dictionary defines it as:

The Hebrew for the word we translate as repent or repentance is nacham and it carries a meaning of strong emotion such as sorrow. Strong’s Dictionary defines it as:

Even in the etymology (study of the origin of words and the way in which their meanings have changed throughout history) of the word repent we find a meaning of emotion.

The 1828 Noah Webster Dictionary repent/repentance as:

REPENT, verb intransitive: 1. To feel pain, sorrow or regret for something done or spoken; as, to repent that we have lost much time in idleness or sensual pleasure; to repent that we have injured or wounded the feelings of a friend. A person repents only of what he himself has done or said.  2. To express sorrow for something past.  Enobarbus did before thy face repent.  3. To change the mind in consequence of the inconvenience or injury done by past conduct. Lest peradventure the people repent when they see war, and they return. Exodus 13:17.

REPENT, verb intransitive: 1. To remember with sorrow; as, to repent rash words; to repent an injury done to a neighbor; to repent follies and vices. [See Repentance.]  2. With the reciprocal pronoun.  No man repented him of his wickedness. Jeremiah 8:6.

REPENTANCE, noun. 1. Sorrow for any thing done or said; the pain or grief which a person experiences in consequence of the injury

Nothing has changed since 1828.  Today’s widely-used source, Dictionary.com, defines repent as:

Repentance, noun, 1. deep sorrow, compunction, or contrition for a past sin, wrongdoing, or the like. 2. regret for any past action.

Is It Wrong to Say Repent Means Turning?

Now, let’s not be too critical of those who witness by explaining that biblical repentance is turning from sin.  While New Testament repentance in salvation is actually a change of mind (from the Greek word metanoia), the change of mind should be an understanding of sin and its consequences.  Therefore, when the mind changes and the heart is sorrowful about sin, one should desire to turn to Jesus.

But Isn’t Turning a Work?

I would suggest that those who try to say that turning (as a response to repentance) is a work are incorrectly understanding what the word means.

The “turning” to Jesus is not a work, but rather a demonstration of a heart condition that is repentant and desires to be forgiven.  In “turning” to Jesus one must “turn” from self and sin.  But this “turning” is not an act of work.  It is simply a volitional act of our free will.

God created man with a free will to choose, and our faith is not a mindless faith.  It is a rational (thinking), emotional (feeling), and volitional (responding) faith.  It is a faith that is birthed and fueled by God through the revelation of Himself and His Word.  God reveals all things necessary for fallen man to understand and respond in faith to His offer of salvation.

When one understands his sin and that it separates him from his creator, it should produce the emotional sorrow and rational change of mind of repentance–and that should generate the volitional act of seeking God to receive forgiveness, new birth (union through Jesus), and relationship (communion with God).

Repentance is not a work. We are saved by grace alone through faith (Eph 2:8).  But that faith comes from a revelation of one’s sin that causes the heart to sorrow and the mind to change.  The response to thinking differently about one’s sin is to turn to Jesus and ask for His forgiveness and saving grace.

The only “work” we do is to call upon the name of the Lord (“work” used with scare quotes to indicate it’s not really a work).  When a repentant sinner calls upon Jesus, He is faithful to save.

Rom 10:13  For whosoever shall call upon the name of the Lord shall be saved.

It is Jesus’ work on the cross that paid for our sins and His grace alone that saves.

Eph 2:5  even when we were dead in trespasses, made us alive together with Christ (by grace you have been saved),

Eph 2:8-9  For by grace you have been saved through faith, and that not of yourselves; it is the gift of God, not of works, lest anyone should boast.

When leaving a tract, always be diligent to pray for the short gospel message. Pray that it be found by someone who is in need of Jesus’ saving grace, and pray that the person will have a tender heart and open ears to receive the gift Jesus desires to give them. 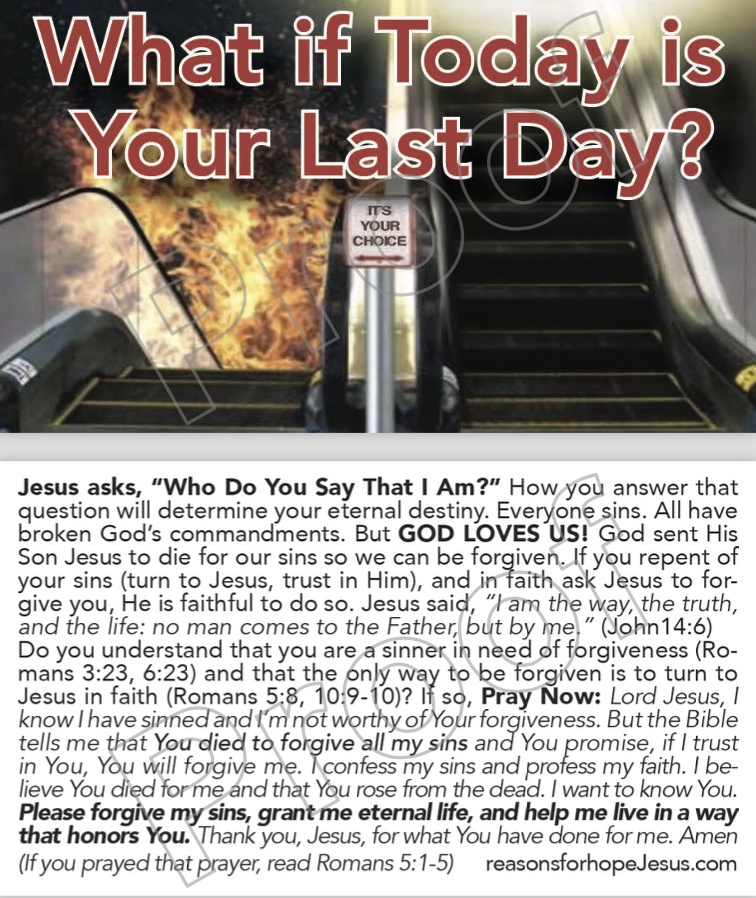 CLICK IMAGE TO READ the answer to the question Jesus asks. 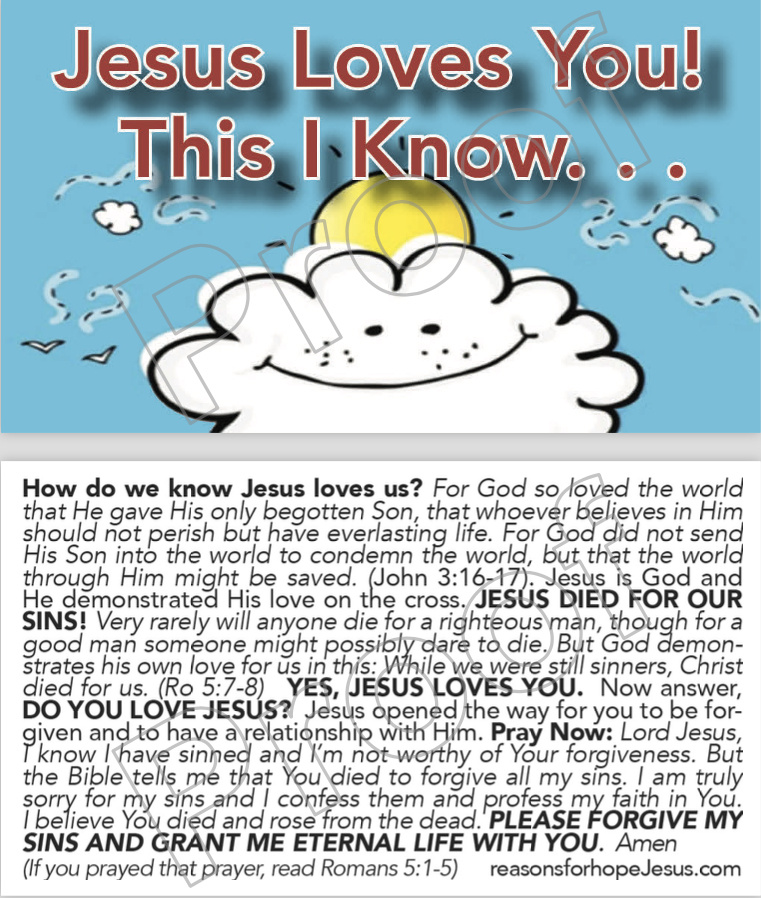 CLICK IMAGE TO READ about how we can know Jesus loves us.