The Blood Curse of Jeconiah 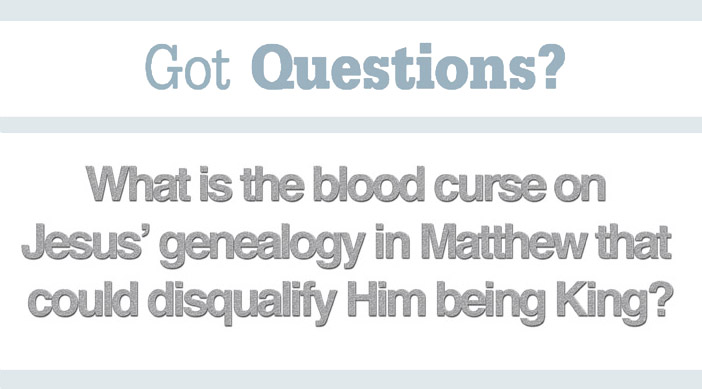 Last week we addressed the supposed contradiction in the two genealogies of Jesus as recorded in Matthew and Luke.   We noted the differences in the Matthew and Luke accounts following King David.  Matthew’s account is from Abraham to Joseph to Jesus, and it goes through King David’s first surviving son by Bathsheba, King Solomon.  Luke’s account is from Adam to Mary (Joseph’s name is listed) to Jesus, and it’s through King David’s second surviving son by Bathsheba, Nathan.

Because these are the genealogies of two different people, there is nothing unusual about the lineage varying after King David.  However, there is an interesting fact that is found tucked away in these genealogies.  The line of Joseph has a blood curse that was placed upon a descendant of King Solomon’s, a king of Judah by the name of Jeconiah (also known as Jehoiachin and Coniah).

The Blood Curse of Jeconiah

Jeconiah was a wicked king and God decreed that none of his descendants would ever ascend to the throne of David.

Jeremiah 22:30  Thus saith the LORD, Write ye this man [Jeconiah] childless, a man that shall not prosper in his days: for no man of his seed shall prosper, sitting upon the throne of David, and ruling any more in Judah.

Jeconiah was a descendant in the line of Solomon, so the genealogy in Matthew is tainted with a blood curse from Jeconiah all the way to Joseph.  No descendant of Jeconiah would qualify as King of Israel.  But remember, Joseph was only the legal father of Jesus, not his biological father.  Therefore Jesus was not of the seed of Jeconiah.  The blood curse, which would have disqualified Him from a legal right to rule as King of Judah, was not passed on to Jesus.

Mary was Jesus’ only human parent.  It was through her ancestry that Jesus had a birthright in the bloodline of the Tribe of Judah, the line from which all kings  of Judah came.  The genealogy of Jesus through Mary is not through Solomon, but through Nathan (the second surviving son of King David).  Jeconiah was not an ancestor of Mary’s and therefore the blood curse is not upon Jesus’ ancestral line through His mother.

So if Joseph had been Jesus’ biological father, He could not have fulfilled the prophecy of being Messiah.  This supports the virgin birth, which is exactly what was prophesied:

Isaiah 7:14  Therefore the Lord himself shall give you a sign; Behold, a virgin shall conceive, and bear a son, and shall call his name Immanuel.

Matthew 1:23  Behold, a virgin shall be with child, and shall bring forth a son, and they shall call his name Emmanuel, which being interpreted is, God with us.

Luke 1:35  And the angel answered and said to her, “The Holy Spirit will come upon you, and the power of the Highest will overshadow you; therefore, also, that Holy One who is to be born will be called the Son of God.

As early as the second century, the church affirmed this very simply and clearly in The Apostle’s Creed:

“I believe … in Jesus Christ, his only Son, our Lord, who was conceived by the Holy Spirit, born of the Virgin Mary….”

The Nicene Creed (325, 391 AD) further defines the implications of the virgin birth with greater clarity:

“We believe … in one Lord Jesus Christ, the only-begotten Son of God, begotten of the Father before all worlds, Light of Light, very God of very God, begotten, not made, being of one substance with the Father….”

In summary, Joseph was Jesus’ earthly, adopted father.  God is Jesus’ heavenly Father.  Jesus was begotten of God, conceived by the Holy Spirit.  Mary was Jesus’ human mother, a young virgin who gave birth to the Son of God.  The blood curse upon Joseph’s line was not passed on to Jesus.  Mary’s blood line was pure in that it was without the blemish of a curse.  Jesus by all accounts is the King of king and Lord of lords.  Hallelujah!

Where are the genealogies of Jesus in Mark and John?
Why are There Two Different Genealogies for Jesus?

In this time of confusion and uncertainty because of the COVID-19 pandemic,  we must rightly remember who is in control.  Our God is sovereign over all things, including COVID-19.  As Charles Spurgeon (1834-1892) once said, “The sovereignty of God is a soft pillow on which weary people lay their heads.”