God Meets You Where You Are

by Tullian Tchividjian, pastor, The Sanctuary Florida | May 10, 2022 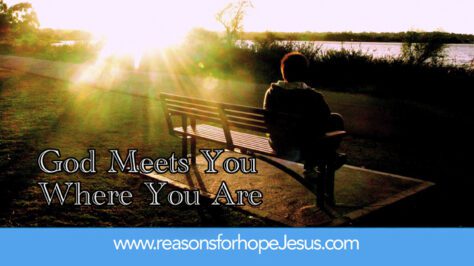 We all suffer. Pain is unavoidable. And it’s not a question of “if” but “when” we experience pain and suffering.

It can take the form of a sudden catastrophe, such as the news of a brain tumor, an affair, or the death of a child. Or it can be something more ordinary like a strained relationship that never seems to get easier, dragging on in a kind of dull ache. There are physical sources of suffering, of course, and there are emotional sources. And sometimes they are one and the same. Sometimes the source is obvious. And sometimes it is hidden, such as the slow-boiling anxiety or depression that haunts us unexplainably even in our happiest moments.

In fact, for some of us, pain has become such a pervasive fact of daily life that we’ve grown numb to it. Others feel it more acutely, doing whatever they can to alleviate the feeling by means of self-medication.

Whatever your experience, whatever variety of pain you’re most familiar with, this truth remains: each of us suffers in some way, every single day.

Sadly, the ways in which we are exhorted to cope with pain, loss, and tragedy often make the problems worse. Perhaps we’re told to roll up our sleeves and get down to the business of fixing things (and people!). Or perhaps we succumb to the “can-do, Pollyanna optimism” of our surrounding culture. “Put on a happy face and try to think positive.”  If only our churches were immune to such approaches!

Have you ever felt like you couldn’t share the details of a difficult situation without someone immediately offering a solution or a spiritual platitude? Have you ever responded that way yourself? The required cheerfulness that characterizes many of our churches has produced a suffocating environment, Many offer pat, religious answers to the painful, complex questions that riddle the lives of hurting people.

Some Christians are guilty of throwing out an equivalent sentiment. They play the “God is Sovereign card,” as a way to trump every pain that comes our way. “Sure, trouble will come, but don’t cry,” says the “Sovereignty Card Stoic.” And, “Don’t allow yourself to feel deep, painful emotions. After all, God is in complete control. If you show a lack of self-control, you must not be living in faith.”

The less traditional version of this religious stoicism (but easier to pick on) is what is known as the “Prosperity Gospel.” Taken to the extreme, the Prosperity Worldview essentially makes the experience of brokenness and pain the fault of the sufferer. And claims it’s due to an inability to muster enough personal faith. I have actually heard people say, “We tie God’s hands when we don’t simply reach out in faith and take what he has promised. Whether it’s money, health, or success, we suffer in life because we haven’t exercised enough faith.”

I suppose the ones I’m the most familiar with these days are well-meaning Christians who try to talk you out of sadness by pushing a deeper belief in the gospel. Piously pointing to the forgiveness we have in Jesus and the guilt that was forever put away on His cross, they try to convince sufferers that we’re simply not believing the gospel enough.  As if telling someone to believe more, produces more belief.

But maybe, just maybe, the freedom to acknowledge how sad and shameful we feel is the fruit of believing exactly what we’re called to believe.

One of the byproducts of belief is the freedom to feel what you’re feeling rather than to deny it. In other words, it takes God-given faith in the finished work of Jesus to honestly admit that we’re not OK and that we can’t seem to “get over it.” (Read:  “Get Better” Doesn’t Work)

If you have heard—or are hearing—any of these things, you know the additional pain it can cause. For example:

It’s like telling a drowning person to paddle harder and kick faster.

That may be the best description I’ve ever read of what it feels like for depressed people to try to cheer themselves up. (I’m reminded of the fact that Job’s “friends” were “great counselors” UNTIL they opened their mouths!)

True Christianity, however, is in no way a stoic faith. It fundamentally rejects the “stiff-upper-lip” school of thought. God doesn’t treat human pain and loss and suffering stoically. He is not a tough “get over it” kind of God. Rather, in Jesus, he tenderly “gets in it”—WITH us. Isn’t that one of the most beautiful, life-giving truths of the Incarnation itself?

“‘Behold, the virgin shall conceive and bear a son, and they shall call his name Immanuel’ (which means, God with us).”(Matthew 1:23)

God invites you today to appropriately grieve your pains and losses and to acknowledge that you, everybody else, and the world itself, are all seriously broken. This does not mean casting yourself exclusively as the self-pitying victim of circumstances beyond your control.  Nor does it mean indulging in “entitlement” when it comes to God and our fellow sufferers. But make no mistake—we are all both victims AND victimizers. Just as everyone suffers, no one is innocent of causing suffering themselves. It simply means acknowledging the reality of your own suffering and need.

You might rightly ask if all of this talk is a bit morose; “What is the point of harping on such negativity?

Where is the hope?”

I’ll explain with a conversion story from Sean Norris, who describes a life-altering interaction with a professor:

“Here I was, a western, white, suburban, Christian male. According to the Christianity of my upbringing, I had never really suffered in my life. I had never experienced starvation or extreme poverty… not been persecuted for my faith…not been harassed or wrongfully imprisoned, and so on. But in a single swipe, my teacher dismissed all of that. He told us to stop comparing ourselves to others, stop comparing ourselves to people in the third world, to people who are ‘really suffering.’

“He told us that the only point of comparison that truly mattered was the perfect demand of God’s law. In that light, there was no exception, we were all condemned and, as a result, we all had the same need…the need for grace. I was pointed back to Jesus Christ and his cross, the one who knows our sin and our suffering and chose to suffer it once and for all, so that our stories would cease to be about guilt and shame and would become about forgiveness and freedom. I learned that day that the gospel was for me, and it changed my life forever.”

And the Gospel Can Change Your Life

He is interested in you. The you who suffers, and who inflicts suffering on others. The you who hides, and the you who has bad days (and good ones). And God meets you where you are.

Jesus is not the man at the top of the stairs—He is the man at the bottom. He is the Friend of sinners, the Savior of those in need of one. Which is all of us—all of the time!

Tullian is the pastor at The Sanctuary Florida in Jupiter Florida. The Sanctuary is a non-denominational church, proclaiming the boundless love of Jesus to a broken world.  Because of what Jesus has accomplished for us, The Sanctuary is a judgment-free zone where people can come as they are, not as they should be. It is a place to find love and laughter, hope and healing, acceptance and forgiveness, and mercy and help. Watch more of Tullian's messages on The Sanctuary's YouTube.channel.  Connect with the church on Facebook. Find Tulllian's books on Amazon.