Can There Be Sin In Heaven? 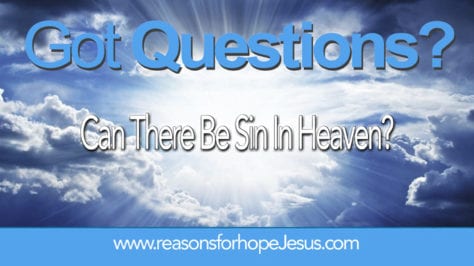 We know that the sin of Lucifer was committed in Heaven. Let’s summarize what we know about this fallen angel and his sin.

Because Satan’s rebellion was committed in Heaven, we can say that there was sin in Heaven. However, we know that God will not tolerate sin and He will judge all sin — and He did just that. He judged Lucifer’s sin and purified His Heaven by casting him out (Isaiah 14:12).  Jesus said, “I beheld Satan as lightning fall from heaven” (Luke 10:18). Perhaps Satan appeared as lightning falling because prior to his sin he had been the light bearer in Heaven.  And Paul warns us that Satan, in his deceptive ways, Satan is still able to appear as an angel of light (2 Cor 11:14).

Another consideration about the possibility of sin in Heaven is found in Job 2:1 “Again there was a day when the sons of God came to present themselves before the LORD, and Satan came also among them to present himself before the LORD.”

When Satan presented himself before the Lord in Heaven, he did so as a sinful creature and with the intent of accusing Job, a faithful servant of God.  In his accusation, Satan questioned both God’s provision and His character.  He suggested that Job loved God only because God had blessed him with good things. Of course, these accusations were lies. So they were sins, and they were committed “before the Lord.”  Yet we don’t read of God judging his sins or casting him out, as He did when Satan was known as Lucifer.

Was Satan in Heaven?

Now, this is where we need to be careful. We can only reason about this, so I suggest for your consideration a possible answer.

We do not know if God’s “throne room” is an entrance into the heavenly realm or if it is actually in Heaven.  IF it is only the entrance, then it could be that Satan did not enter into Heaven, which supports the reasoning that God will not allow any sin, or sinner, to enter Heaven.  But IF Satan truly did enter into Heaven, to present himself before the Lord, then there has been sin, and a sinner, in Heaven, in God’s perfect and holy dwelling place. That doesn’t sound probable to us, but it could have been possible.

Remember, this is simply something to ponder because the Bible does not tell us much about the Third Heaven—probably because we are incapable of comprehending the infinite with our finite minds.

Other Sinners in Heaven?

We should also note that both Paul and John were taken up to the Third Heaven to be taught by Jesus (2 Cor 12:2-4, Rev 4:1).  Did they entire into the Third Heaven? Or did they simply come before the Lord at an entrance to Heaven?

Again, the Bible does not explicitly answer these questions.  What we do know is that Paul was there for some time (perhaps three years) and John was there long enough to be given extensive revelation.  If both did enter into the Third Heaven, in human bodies, we must wonder, why would God allow sinners into His holy Heaven?  In the case of Paul and John, the answer would be that both Paul and John were not sinners.  They were forgiven sinners--forgiven by Jesus, washed clean in His blood, and clothed in His imputed righteousness (Read: The Gift of SalvaTION: Justification & Imputation  What are the Doctrines of Imputed, Infused, and Imparted Righteousness?)

Back to our original questions.  Can there be sin in Heaven?  Yes, because there was the instance of Lucifer’s sin that took place in Heaven.

Could it happen again?  I suggest that it could because God created all the heavenly host (the angels) with free will. However, just as God quickly judged Lucifer and those who rebelled, and cast them out, He would do the same if it happened again.

This should raise the question, is it likely to happen again?  I suggest it is NOT.  Having seen the consequences of the sins of  Lucifer and the fallen angels, it seems reasonable that the angels in Heaven would count the cost of committing any sin against their Creator.  More significantly, I would suggest that the angels in Heaven, throughout the ages, have seen God’s love magnified in His mercy and grace that He has extended to His earthly creation.  Therefore, in joy, they choose to worship the One who created them continually, and forever and ever.