Why Did It Need to Be a Blood Atonement? 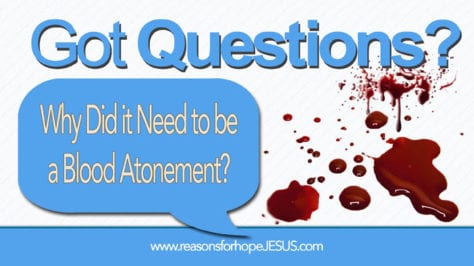 Could the atonement for sin have been done another way?  This question was asked in 2014, and the answer is NO!  Jesus had to go to the cross and He had to die in exactly the way that it happened.  But why?  Because it was God’s plan?  Well, the answer to that question is a definite yes.  If God ordains something, it is guaranteed to come to pass.  But there’s much more to the answer.

Now we have the question, Why did it need to be a blood atonement?  There’s a very simple reason, and it’s God’s Word that provides it.

Blood…from the Garden to the Cross

Let’s go back to the beginning when Adam and Eve sinned.  The fall of man was a result of their disobedience to God, when God commanded that they were not to eat of the tree of the knowledge of good and evil. (Genesis 2:17)

Adam and Eve’s disobedience was sin against God and it broke their union and communion with God. They died spiritually and they began to die physically (Read Is there an error in Genesis 2:17 because Adam & Eve did not physically die?).  The Bible tells us that Adam and Eve’s eyes were opened and they saw that they were naked.  In an attempt to cover their sin (evidenced by awareness of their nakedness) they sewed together fig leaves (Genesis 3:7).  Of course, their works were not sufficient to cover their sin.  Therefore, God in His mercy covered them with animal skins (Genesis 3:21).  Animal skins!  Don’t read past that too quickly.  God’s covering them with animal skins was the first evidence of the necessity of blood to cover sin.  And it is the beginning of understanding why Jesus had to die on the cross, in the way that the Gospels record.

God’s covering of Adam and Eve

1) An animal needed to be killed.  Prior to this time there was no death in God’s perfectly created world. Death entered the world when Adam and Eve sinned, and because of their sin the first animal died.  The Bible clearly states, in later revelation, that the wages of sin is death (Romans 6:23).

2) Adam and Eve were incapable of atoning for their sin by their works or power.  While it was the sin of Adam and Eve that introduced death into God’s perfect creation, it was God who killed the animal to provide the covering for their sin.  This shows God’s judgment of sin (death is the penalty).  And it shows God’s mercy and grace. He gave a substitionary atonement.  The life of an innocent animal paid for the sins of guilty Adam and Eve.  God did for Adam and Eve what they could not do for themselves. Only the Giver of Physical Life has the right to take life.  And only the Giver of Spiritual Relationship can repair a broken relationship.  God killed the animal so the sin of Adam and Eve would be paid for and their relationship with Him would be repaired.  This pointed to a future day when Another would come and die for the sins of mankind opening the way to eternal life and restored relationship with God.

3) Blood is required.  Genesis 3:21 tells us that God clothed Adam and Eve with “coats of skins. ” Therefore the first death in our world was an animal’s blood to pay for man’s sins.  This pointed to a time when God would provide Himself, in the Person of the Lord Jesus Christ, as the sacrificial Lamb.  Innocent blood would pay for the guilt and stain of sin.   All who repent and trust in Jesus receive His forgiveness of sins and are clothed in His “coat” (His robe of righteousness), in much the same way that God clothed Adam and Eve in the “coats of skins.”

Blood Required from Genesis to Jesus

From the time of Adam and Eve, until the time of the cross, the sacrifice of an animal and the shedding of its blood was God’s required provision for covering man’s sin.  This is seen throughout the Old Testament and it’s clearly revealed in what the Jews call the Akedah, or the binding of Isaac in Genesis.

Abraham was instructed by God to offer Isaac as a sacrifice on Mt. Moriah.  Abraham built an altar, laid wood, bound Isaac and laid Isaac upon the wood (Genesis 22:9).  As Abraham lifted the knife above Isaac to slay him, God spoke and stopped Abraham’s hand (Genesis 22:10-12).  God then provided a ram.  It was not Abraham who found the animal to offer.  It was God who provided the animal.

Gen 22:13  Then Abraham lifted his eyes and looked, and there behind him was a ram caught in a thicket by its horns. So Abraham went and took the ram[*], and offered it up for a burnt offering instead of his son.

This pointed to a future time when another Father (God) would offer up His Son (Jesus) to make atonement for the sins of all mankind.  This time the sacrifice would not be stopped by God the Father.  Instead His Son, right before death, would declare, “It is finished.” (John  19:30)

* Adult female sheep are referred to as ewes, intact males as rams, castrated males as wethers, and younger sheep as lambs. God provided this ram (a lamb that had reached maturity) as a substitutionary atonement. This pointed toward the Lamb of God who would come as the final atonement for sin.

The practice of animal sacrifice was more clearly defined by God and practiced by the people of Israel beginning with the wilderness wanderings.  God instructed the Jews to build a Tabernacle in which He would meet with His people.  He called the Levites into service and gave them explicit instructions about the sacrificial system He required and how they were to worship.

The book of Leviticus describes the sacrificial system and tells that animal sacrifice (the shedding of blood) was required for the atonement of their sins.

So why did God send His Son to die for us? Why couldn’t man have just continued with the animal sacrifices?

Three key factors to understand this:

1)  God’s plan was to completely redeem man, and cleanse him of all sin–not just to cover it, as animal blood did.

3)  God is just.  Because man’s life (his blood) is not pure it cannot atone for sin or cleanse man of his sin.

As a just judge God had to require a full and perfect atonement.  A sinless life had to be sacrificed for sinful life.  Only a sinless human life would suffice.  Animals do not sin.  They live under the curse of sin, but it is man who is born with a sin nature and lives a sinful life.  Therefore an animal’s blood could not fully atone for man’s sin.

It had to be a man’s blood and it had to be the pure blood of man who lived a sinless life.  Only God could provide that Man, and He did so by giving His Son (John 3:16).  What God had promised in the Garden (Genesis 3:15), He fulfilled through Jesus.  Jesus came to earth and took on a human body, with flesh, bone and blood!  He set aside His divine nature (Philippians 2:7) and lived a perfect, pure and sinless life.  When He offered His life on the cross, He gave His sinless life for the sinful life of mankind.  He shed His pure blood for man’s sinful blood.

The atonement for sin could not have been done in any other way. It had to be by blood atonement.

Heb 9:22  …without shedding of blood there is no remission [of sin].

Nor could atonement have been made by any other man, for only Jesus lived a sinless life (Philippians 2:8).

Phil 2:8  …He humbled Himself and became obedient to the point of death…

God knew what He was doing when He created man.  He created man for His pleasure and for His glory (Revelation 4:11, Isaiah 43:7) and yet He knew that man would sin.  But even in man’s sin, God is glorified and magnified.  His mercies are revealed, and in salvation His forgiveness and grace is magnified, and His name is glorified forever more.

Bearing shame and scoffing rude,
In my place condemned He stood;
Sealed my pardon with His blood.
Hallelujah! What a Savior!

Guilty, vile, and helpless we;
Spotless Lamb of God was He;
“Full atonement!” can it be?
Hallelujah! What a Savior!

Lifted up was He to die;
“It is finished!” was His cry;
Now in Heav’n exalted high.
Hallelujah! What a Savior!