What is a Worldview? Can it answer life’s questions? 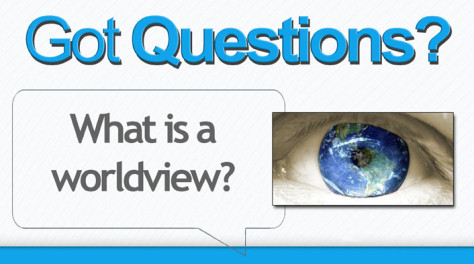 A worldview is a defined philosophy about life that influences and directs how we live.  While there are many world views that are defined and labeled, a worldview is really very individual and personal.  One’s worldview  is formed and articulated by the way in which the individual perceives and understand the world around them.

Much in the same way that every person’s relationship with Jesus is personal and individual, so also are the fine details of one’s worldview.  There are, however, core foundations that enable a broad definition of  worldviews into a number of categories.

Our mental perception of the reality in which we live greatly determines our worldview.  Therefore, in addition to those listed above some people might claim to be “free-thinkers” and not adhere to any of the mainstream definitions. However, for all intents and purposes, they only modify the basic belief system of one of the five and tend to not define very clearly what they believe.  Rather than “free thinkers” it can better be defined as “loose thinkers” with shifting views.

The Questions of Life

All worldviews seek to explain the most basic questions of life:

Where did I come from?

Why am I here?

What is my purpose in life?

Where will I go when I die?

Why is the world in the condition it is in?

What can be done to improve my life?

What can I do to make a difference in the world?

How people answer these basic questions is influenced by their knowledge and perceptions of the world around them and by what they hold to be true.  In other words, one’s worldview is defined by one’s beliefs.  Since much of the knowledge, and many of the perceptions, are not provable, worldviews are also a type of faith-based system.  All worldviews are religious in nature, because they create a system of beliefs to which people hold fast, and by which they live their lives until they reach their ultimate destiny, which is also defined by their worldview.

True, False or No Religion

Man has been trying to understand and define his life and his world since the fall of Adam and Eve (Genesis 3). Therefore, defining worldviews is nothing new.  In previous centuries the five worldviews listed above would have been simplified into 1) the Abrahamic faith religions, 2) false religions and 3) no religion.  Over the course of the 20th century the word religion came to have such an undesirable connotation that people began to say, “It’s not about religion.  It’s about relationship.”  That might sound nice, but it’s actually very wrong.  Relationship comes from religion.  The word “religion” is defined by Oxford Dictionaries (online) as:

1. the belief in and worship of a superhuman controlling power, especially a personal God or gods: ‘ideas about the relationship between science and religion’

1.1 a particular system of faith and worship. ‘the world’s great religions’

1.2 a pursuit or interest to which someone ascribes supreme importance. ‘consumerism is the new religion’

In the 1990s everyone talked about their “paradigm”–their understanding of patterns that helped to shape what they believed. Paradigms are personal interpretations and never without the risk of error.  Therefore, the need for the term, “shifting paradigms.”  All worldviews, except the worldview built on the God of the Holy Bible, are nothing more than shifting paradigms built on incomplete, false or erroneous information.  Only the Christian worldview is built on a rock-solid, never-changing, absolutely-true foundation.  The reason the foundation is never-shifting, always solid, always true?  Because it is not based on man’s knowledge and understanding. It is based on the wisdom of God as revealed through His inerrant Word.

Many reject the Christian worldview because their faith is in themselves first or in the false teachings of false religions.  Their problem with the Christian worldview is that it requires submission to an omnipotent, omniscient, omnipresent Triune God.  Those who adhere to other worldviews have their own religion of self-sufficiency.   Even though the Triune God is proven to be all loving and all good, many will refuse to acknowledge their need to depend on One more powerful and more knowledgable than themselves. They hold fast to belief in themselves and their own power (there’s the religion aspect).

Christianity is an outward and upward (Godward) focused worldview that generates an other-powered (God-powered) life.    All other worldviews promote a self-sufficient, “be all you can be, do all you can do, get all you can get,” life.   And all will fail, because man can never be enough, do enough or get enough.

We could study in detail all the varying worldviews.  And it can be helpful in understanding false religions and what we believe.  But at the end of the day, what’s really important is knowing God’s answers to life’s great questions. It’s important that we understand the Christian worldview so we can share the only true, unshifting, absolute answers with others.  Believers need to firmly know and reminded of God’s answers and non-believers need to hear them.

The Christian Worldview Answers the Questions of Life

Where did I come from?

Why am I here and what is my purpose in life?

Man was created for God’s pleasure and by His will (Revelation 1:6, 4:11). Man’s purpose is to glorify God and enjoy Him forever.

Where will I go when I die?

The end of all men is physical death (Romans 6:23 For the wages of sin is death…) and spiritual life.  All will die and all will live eternally…somewhere.  Those who belong to Christ will live in Heaven with their Creator, having received forgiveness of sins and the gift of salvation (Romans 6:23 …the gift of God is eternal life in Christ Jesus our Lord).  Those who reject God’s gift will live, apart from God in Hell (Mark 9:43-48) condemned by their own choice  (John 3:18 …he that believeth not is condemned already…). They will be judged for their sins and found guilty (Revelation 20:12).

Why is the world in the condition it is in?

One simple word: Sin.  God created the world perfect, without any death or dying. And He created man without sin.  Man chose to disobey God and seek after his own desires.  In doing so, sin entered the world (Romans 5:12).  Every one of us are sinners.  We aren’t sinners because we sin, we sin because we are sinners.  We were born sinners and we are the problem in our world.  The condition of our world is because of the problems caused by the sins of man.

What can be done to improve my life?

All religions, except Christianity, teach that if man tries harder he will get better.  Be a better person.  Do good works. Right the wrongs. Make your life better.  While man is able to accomplish some good things apart from God, they are never enough.  It might make one’s life more enjoyable and comfortable, but it can never fully satisfy the questions of ultimate importance (the first five questions just answered).

Jesus asked, “For what will it profit a man if he gains the whole world, and loses his own soul?”  (Mark 8:36)

Jesus also warned, “…unless you repent you will all likewise perish. (Luke 13:3)

And Jesus promised, …I give unto them [His sheep] eternal life; and they shall never perish…”(John 10:28)

The only way to improve life in a sinful world is to be cleansed of one’s own sins and receive the gift of salvation in the Lord Jesus Christ.  When Jesus saves someone, He also gives them the Holy Spirit, to indwell them and empower them to live a better life.

What can I do to make a difference in the world?

Just as sin is man’s problem, it is also the world’s problem.  The only way to make a difference in our world is to turn the hearts of all people to God.  Turn conversations from worldly matters to those of spiritual importance.  Know the foundational truths of the Christian worldview (religion, faith, relationship–whatever you choose to call it).   Be prepared and ready to share the love and saving grace of Jesus with all people. Make a difference by living according to His will and by reflecting His light.

Neither do men light a candle, and put it under a bushel [basket], but on a candlestick; and it gives light unto all that are in the house.  Let your light so shine before men, that they may see your good works, and glorify your Father which is in heaven.  (Matthew 5:15-16)

The Doctrines of Salvation: