How should I live so I hear, “well done, good and faithful servant?”  I’m afraid I’ll hear “you wicked and lazy servant.” 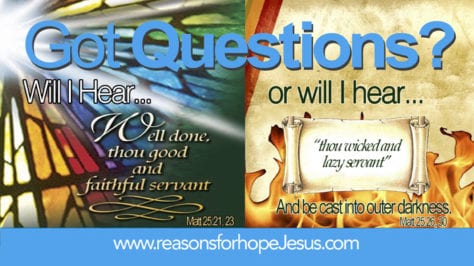 Before explaining this, let me say that no Christian should have this concern.  All Christians will hear “well done, good and faithful servant.”  Bear with me as we examine the context and the meaning of what Jesus said.  This answer is longer than most, but it is vitally important that Christians understand Jesus’ teaching about the two kinds of servants.

Jesus spoke these words in a parable in Matthew chapter 25. Parables are little stories, told to teach a moral and spiritual lesson.

This chapter records Jesus speaking privately to his 12 disciples (Mat 24:3).  The disciples asked Jesus when the end would come (Matt 24:3).  And Jesus responded by warning them not to be deceived (Matt 24:4-8), telling of events that would reveal the coming end (Matt 24:9ff), and advising them to be ready (Matt 24:44).

The closing passage of the chapter (Matthew 24:32ff), is referred to as the parable of the fig tree.  It is a prophecy about the nation of Israel, not about the Church. For a better understanding read, Is God Fulfilling All Things?  The Parable of the Fig Tree (Matt 24)

The Servants of Matthew 24

Jesus was telling of the eternal destiny of these two servants: one who would be glorified (“blessed and…made to rule”) and the other who would be condemned (“weeping and gnashing of teeth” is a description of the existence of those condemned).

Now we move into chapter 25. Again, remember that there were no chapter breaks.  This chapter is a continuation of  Jesus’ words about servants, spoken privately to his 12 disciples in Matthew 24.  Jesus began with a warning:

Mat 25:13  “Watch, therefore, for you know neither the day nor the hour in which the Son of Man is coming.

Jesus then gave another parable. To understand a parable it’s necessary to discern who the characters represent and what the application is for those hearing the parable.  Just like the Parable of the Fig Tree in Matthew 24, this parable is about Israel.  And Jesus was still speaking to them about the end. This is not about the Church.  Although we can learn lessons from it.

The Parable of the Talents [all bracketed information is mine].

Mat 25:14-15 For the kingdom of heaven [the dwelling place of God in a physical realm] is like a man traveling to a far country [the man would represent Jesus when He came to earth, far from Heaven.], who called his own servants [God’s people, Israel] and delivered his goods [Jesus’ goods: His words and His works] to them.  And to one he gave five talents, to another two, and to another one, to each according to his own ability [some heard more of His words and saw more of His works, but all were given sufficient “talents” to do something with]; and immediately he went on a journey.

The parable continues by explaining in detail what each of the three servants did with what they were given.

Two servants multiplied the worth of what they were given.  The third did nothing with his gift.

Mat 25:19-23  “After a long time the lord of those servants came and settled accounts with them. So he who had received five talents came and brought five other talents, saying, ‘Lord, you delivered to me five talents; look, I have gained five more talents besides them.’ His lord said to him, ‘Well done, good and faithful servant; you were faithful over a few things, I will make you ruler over many things. Enter into the joy of your lord.’

“He also who had received two talents came and said, ‘Lord, you delivered to me two talents; look, I have gained two more talents besides them.’ His lord said to him, ‘Well done, good and faithful servant; you have been faithful over a few things, I will make you ruler over many things. Enter into the joy of your lord.’”

Mat 25:24-26  “Then he who had received the one talent came and said, ‘Lord, I knew you to be a hard man, reaping where you have not sown, and gathering where you have not scattered seed. ‘And I was afraid, and went and hid your talent in the ground. Look, there you have what is yours.’  But his lord answered and said to him, ‘You wicked and lazy servant…'”

The Fear of Many

Many Christians express fear they have not done enough with what they have been given.  They fear they will not hear, “well done, good and faithful servant” because they haven’t served enough, evangelized enough, read the Bible enough, etc. And they fear that they might hear “you wicked and lazy servant.” That will not happen to any Christian.  Let’s understand why…

Again, the talents were the “goods” that the man [Jesus] had delivered to His servants [Israel]. (Matthew 25:14)  The goods were brought from the far country [Heaven]. Therefore, the goods were the Lord’s words and works, culminating in His atonement.

Now, understand that this parable was spoken to Israel under the Old Covenant. And we live under the New Covenant that began at the cross (Heb 8:13).

Prior to Jesus’ payment for the sins of mankind, God’s redemptive relationship was through His people Israel under a very different covenant.  Before the cross, sin was atoned for with the blood of animals and atonement had to be made over and over again. At the cross, the sin of the world was completely paid for by Jesus’ pure blood.   And Jesus proclaimed, “It is finished.” (John 19:30).

Mat 25:30  And cast the unprofitable servant into the outer darkness. There will be weeping and gnashing of teeth.

This is clearly a condemnation of a soul to Hell to spend eternity apart from God.  That can never happen to a Christian, for Jesus has promised to all whom He saves that they will have eternal life (Read: What is eternal security/assurance of salvation?)  It is guaranteed. (Rom 8:1).

Therefore, no Christian will ever hear “you wicked and lazy servant,” because Jesus has sealed them (Eph 4:30) and their salvation is secure.   All Christians will hear…

Mat 25:29-29  ‘For to everyone who has [Has what?  Faith in Jesus’ words and works, demonstrated by what was done with the talents to multiply them.], more will be given, and he will have abundance; but from him who does not have [The servant without faith, whose lack of faith was demonstrated by his works, hiding the talent, and by his words, “Lord, I knew you to be a hard man…”], even what he [the unfaithful servant] has will be taken away.

This parable teaches about justification (being saved), not sanctification (growing in holiness after justification). Why?  Because the faithful servants knew and loved their master, evidenced by their obeying him.  They were rewarded.  In contrast, the wicked and lazy servant did not know his master and was cast into outer darkness (Matt 25:30).  This parable is a continuation of Jesus’ teaching in Matthew 24 about the faithful and evil servants.

No Christian should ever worry they will hear “thou wicked and lazy servant.”  They’ve received Jesus’ words, trusted in His work on the cross, and been saved by Him. What Christians should do is share Jesus’ love with others.  And tell all people about His saving grace, knowing that they will one day hear “well done, thou good and faithful servant.”

So we’ve nowe covered the parable of the talents. But the chapter doesn’t end there. . .

Watch for next week’s Got Questions? We’ll address the sheep and the goats of Matthew 25

If you belong to Jesus…

Serve Him faithfully.  Live your life to glorify Him and to share the good news of His saving grace.