What Signs Indicate the End is Near? 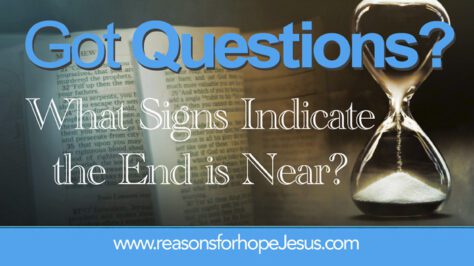 We have been in the “last days” since Jesus ascended to Heaven.  Christ’s imminent return is a church doctrine that says Jesus could return at any time. However, it’s well believed that we are in “the last days” of the “last days.”  That means the Rapture of the Church is drawing nearer.  It will be followed by the return of the Lord Jesus Christ to rule and reign in His kingdom of righteousness.

There are many signs that the end is near.  Today, consider twelve of the signs.

Israel was an ancient nation when Jesus was on earth.  With the destruction of the Jewish Temple in 70 AD by the Romans, the people of the nation were dispersed worldwide, and the nation no longer existed.  But in 1948, the nation of Israel was born again and was young and tender, fulfilling Jesus’ prophetic words and God’s prophecy of a gathering of His people from the ends of the earth.

Wars continue throughout the world and intensify as we get closer to the end.

There have always been natural disasters, and they continue and intensify in these last days.

Evil is increasing. Truth is being rejected, or redefined as relative (personally determined, differing from person to person).  The lust of the flesh, the lust of the eyes, and the pride of life are increasingly capturing the hearts of many.

False prophets and false “Christs” have existed since the days of the disciples (1 Peter 2:1; Jude 17-18). But because of technology, those alive today have worldwide platforms to “preach” lies and deception.  Their anti-biblical influence is corrupting people everywhere.

Immoral behavior has gone from being tolerated to being accepted, to being approved and even as far as being celebrated.  Many countries have compromised morals, values, and ethics and no longer acknowledge biblical standards.

Secularism and hedonism are increasing and drawing people away from the church; Many churches are compromising with the culture, rejecting God’s truths, and preaching social gospels that deny biblical truths.

The threat of nuclear war is a real and present danger, and the power to implement such a war is in the hands of leaders who are unrestrained by God’s precepts and principles.

This will become a reality in the Tribulation, but many of today’s world leaders speak of a new and unique global unity. Political, economic, and social leaders are promoting the creation of a new, one-world order.

When hope diminishes, apathy abounds. With anxiety and depression increasing, a common response is a disillusionment, leading to a troubled soul and a confused mind.  The quickest solution is often to just “shut down” and no longer care.

9.  Rejection of Biblical Precepts and Principals

Never before in history has the Word of God been so maligned.  Efforts to legalize the murdering of the pre-born (abortion) and the promotion of gender confusion in all age groups have ushered in a time when the sanctity of human life is no longer respected or protected, and God’s will and ways are of no impact.

Israel, and specifically Jerusalem, is a small parcel of land. But its importance in world affairs is monumental.  Jerusalem is the epicenter of the earth, and it is God’s city.  But sadly, it has become a divided city.  One day Jesus will return, set up His kingdom, and reign from Jerusalem, with the nation of Israel as the lead nation.

As believers see God’s truths being denied, the world’s lies being promoted, apostasy and apathy increasing, and iniquity abounding, the hope of Jesus’ coming for His Bride increases.  Jesus has promised we are not appointed unto God’s wrath, and He will come and rescue His Church from the time of Jacob’s trouble when the world will be judged, and God will pour out His wrath with the desire that people will come to Him by faith in Jesus.

Those are only 12 signs that remind us that the end of the Church Age is drawing near.  While we should be aware of the signs of the times, we should not focus on them.  We are to be “looking for that blessed hope, and the glorious appearing of the great God and our Saviour Jesus Christ” (Titus 2:13).

There are many prophecies of the events that will take place after the Church is gone when the 70th week of Daniel begins (Read: What is the Seventieth Week of Daniel?)

These prophecies, and their anticipated fulfillment, are both hope and an assurance that God’s plan of total and complete redemption and restoration of all things will take place.  Two of many signs during the Tribulation will magnify God’s mercy and His desire to draw people to Himself.

But until that time, we are the ones called by God to share His message of hope. We are to tell all about His offer of deliverance from sin and death and His gift of new and eternal life.

Take time today to share the gospel of saving grace.  Many need to hear it…before it’s too late.  When the bridegroom returns for His Bride (the Church) and takes her to Heaven, the Tribulation will begin. Then lies, deceit, oppression, coercion, control, and manipulations of Satan will abound as never before. And sadly, many will believe the lies.

Tell people TODAY about Jesus and the hope they can have when they trust in Him for the salvation of their souls.  Visit our Salvation Page for a clear gospel presentation and prayer.  From this presentation, many have prayed the prayer asking for forgiveness of their sins and salvation in Jesus.  Praise God!