Was there a Pre-adamite Heaven and Earth? A Gap Theory? 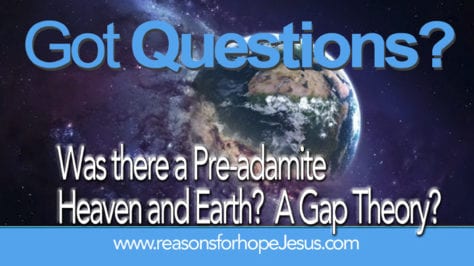 This is a teaching that is held by some Christians.  It offers a way to reconcile the Bible with the claims of the earth being millions, even billions, of years old (Read also, Were the Days of Creation 24-hour Days, or Longer?).   A gap of time, between Genesis 1:1 and 1:2, is suggested by those who believe in a heaven and earth of old — a heaven and earth before Adam and Eve, which is often referred to as a pre-adamite earth.

The supporters of the gap theory claim that God would not create anything that was imperfect.  They consider “without form and void” as a catastrophic state. They maintain that God created the world (vs 1) but something happened between verses 1 and 2, and the world became without form and void (became is not in the biblical text).  This “something happened” was an event that corrupted or destroyed God’s original perfect heaven and earth, mentioned in verse 1.

This is creative thinking to make the Bible agree with the claims of scientists, but it requires adding to what God has said. There is nothing to support the idea of a gap of time between the first two verses of Genesis 1.  The creation account of Genesis should be read as a progressive explanation about how the world came into existence by God’s creative work.

The Gap Theory can be found in some ancient documents by both Jewish and Christian thinkers. However, all of these documents are the thoughts of men and are without significant biblical support.  Many are from heretical (or at the least, not reputable) writers.  The theory gained popularity in the late 1700s and early to mid-1800s when geologists began to claim that the earth was much older than the Bible teaches.  The “gap” became a way of legitimizing what God has written to be true with what geologists of the time were claiming.

In the late 1800s, the gap theory began to permeate some Christian teachings. As it continued to grow in popularity, it gained wider acceptance when it was inserted into the 1917 Scofield Reference Bible study notes.

The Scofield study notes on Genesis 1:1 state, “The first creative act refers to the dateless past, and gives scope to all the geologic ages.”

Scofield had a belief in a pre-adamite world with animal life, calling it a “primitive order” and old-earth creationists today contend that millions of years old fossils are evidence of that world. It’s well documented that the dating methods of fossils are not accurate, because of the effect of a cataclysmic event that changed the earth worldwide, i.e. the Great Flood (of course most secular scientists deny that having happened).

The Scofield study notes also declare that, after “God created the heaven and the earth” (Gen 1:1), that first earth suffered a catastrophe. They contend it was associated with Satan’s sin and it was at that time that Satan fell from heaven (Isaiah 14:12-14). The Scofield study notes claim that led to the earth becoming without form and void in Gen 1:2, and was followed by a re-creation in Gen 1:3-31.

In addition to the study notes in the Scofield Reference Bible, another 20th-century publication, Dake’s Annotated Reference Bible, contains this note: “When men finally agree on the age of the earth, then place the many years (over the historical 6,000) between Genesis 1:1 and 1:2, there will be no conflict between the Book of Genesis and science.”

It should be noted that the Bible does not disagree with science.  It is scientists who disagree with the Bible.  Sadly, many biblical teachers, preachers, and scholars have accepted the Gap Theory as part of the biblical creation account.  However, it should also be understood that there is no scientific evidence or historical record to support the Gap Theory.  Furthermore, It’s should be understood that the Gap Theory is really simply a hypothesis because there is no scientific evidence to make it a theory.

The ministry of Answers in Genesis (www.answersingenesis.org) biblically teaches and biblically supports a young earth creation with evidence that far outweighs the claims of the Gap Theory (really, Gap Hypothesis). They offer in-depth teachings on why the Gap Theory is not true and how God’s Word teaches a young-earth.

Reasons for Hope* Jesus also holds to what we believe is clearly taught in God’s word—a young earth creation. We believe that  “In the beginning, God created” (Gen 1:1) was part of the creation week as described in Genesis 1.  There was no gap.  There was no catastrophe. Verse 2 is simply a continuation of verse 1 and is a description of what the earth looked like when God began to create.   We also believe that, when God concluded His work at the end of the sixth day, God declared “everything that He had made…was very good” (Gen 1:31).  If Satan had been on earth, there would have been sin (not good).  If there had been a pre-adamite earth that was reformed, that earth would have had corruption and death (not good).  God said, “everything that He had made…was very good.”

All that said, this should not be an issue of division among Christians.

While we should discuss creation, and some will even formally debate it, God alone knows exactly how and when He created all things.  He has given us a sufficient account in His Word to know and worship Him as Creator.  We do not want to add extra-biblical reasoning to the words of God to better harmonize the Bible with claims from scientists. However, creation is not a core doctrine for belief unto salvation (Read the core beliefs here: IVDAR-Bible, Birth, Death, Blood, Resurrection).

Do your own study, remembering that science does not offer evidence for the claims scientists make about creation.  In order to provide scientific evidence, there must be experiments conducted that are observable and measurable, and the results must be recorded without bias or error.  No one (other than God) was present at creation to observe, measure, or record what happened.  The only real evidence is the historical record written by the One who was there–the Holy Bible.  The real issue becomes, do we trust God to say what He means and mean what He says, even if it doesn’t make complete sense to us or opposes what man thinks?  Or do we try to make what the world teaches fit into what God has written?

Study God’s Word and let the Holy Spirit guide you into all truth.

So why is the gap theory accepted by some? It’s kind of like, “eating your cake and having it too.”  The gap theory allows for literal 24-hours days in Genesis 1 and yet  it also allows for agreement with scientists who claim the earth to be very old. While this may seem like a way to harmonize the Bible and science, it’s really a compromise.  The teachings about creation told by God in the Bible and those of scientists are in direct opposition.  They can’t both be true.

Take the time to study and decide for yourself which teaching is true.