Were the Days of Creation 24-hour Days, or Longer? 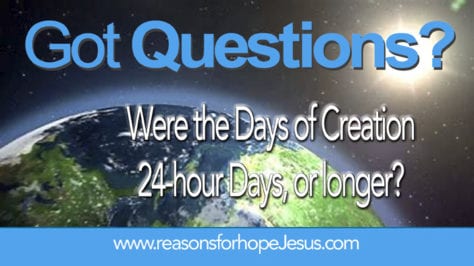 Science claims that the earth is 4.5 +/- billion years old.  Therefore, some people (even some Christians) claim that the six days of creation and the one day of rest, in Genesis, were not literal 24-hour days. They claim the days of cretion represent millions of years.  But do they? Or is a day really a day?

The Claim of Longer Days

A verse in Peter’s second letter is often used to support a claim of much longer days.

This verse is sometimes interpreted as saying that a day is equal to 1,000 years and therefore six days would equal 6,000 years.  And yet, many who claim the days were longer than 24 hours, suggest each “day” could have been many millions of years.  This is a way to fit biblical creation into the claims of science.

As Christians, God’s narrative of when and how He created all things will always trump science’s hypothetical claims about things that it can neither observe nor prove.  Let’s look at what the Bible says as a way to formulate why we believe what we believe about the creation account.

Gen 1:1-5 In the beginning God created the heaven and the earth.  2} And the earth was without form, and void; and darkness was upon the face of the deep.  And the Spirit of God moved upon the face of the waters. 3} And God said, Let there be light: and there was light. 4} And God saw the light, that it was good: and God divided the light from the darkness.  5} And God called the light Day, and the darkness he called Night. And the evening and the morning were the first day…

Genesis 1 continues with a description of the days of creation, days two through six, and Genesis 2 tells that on the seventh day God rested.

What is a Day?

Since the word “yom” can have various meanings, it was important that the writer of Genesis further described the exact time period of “yom,” which he did by using other words with “yom.”  In Genesis 1, the words “the evening and the morning” are used giving a way of dividing the day into two parts. And additionally, each day (yom) is given a number (e.g. first day, second day, etc).  Those words give reasons to support the days of creation as being six literal 24-hour days.

Use of the Word Yom

“Yom” is used 2,301 times in the Old Testament, and the key to knowing whether it refers to a 24-hour time period for a day is understood by the context.  Not including  Genesis, the word “yom” is used:

In every case, when used with a number or with the descriptor, like evening, morning, or night, the word “yom” is used to express a 24 hour day.

Why would Genesis 1 be an exception?

We know that God created time. Genesis 1 tells us that He did so on day one, with his designation of a day being evening and morning. Genesis 1 tells of five additional “evening and morning” days of creation and Genesis 2:1-2 tells of the seventh day, a day of rest.  Clearly, God defined the length of our days, and our weeks, by His design and as a way for us to measure time within our world and according to His created order.

2 Peter 3:8, was mentioned above as the grounds for some to believe in much longer days. But that verse really has nothing to do with the creation week.

In context, Peter is making the point that God is outside of our time dimension. God is not bound by the measurement of time that we have here on earth.

In 2 Peter 3:8, Peter used a figure of speech that we call a simile. A simile is a form of comparison that indirectly compares two things or ideas and yet allows them to remain distinct in spite of their similarities. Similes are indicated by the use of the word “as” or “like.” Neither words are used in Genesis 1.  When Peter wrote, “one day is with the Lord [in heaven] as a thousand years, and a thousand years as one day,” he was simply trying to illustrate how our experience of time is different than God’s.

Another example is Psalm 90, verse4, For a thousand years in thy sight are but as yesterday when it is past, and as a watch in the night.  Again, this verse tells us that God is not constrained by our time dimension.  Not only was He there when time began (and He created time), God will also be there when time ends and we enter into eternity (Rev 1:8).

There are many reasons to accept the Bible’s teachings about God’s creative work as literally written.  Sadly, the most common reason people reject a literal interpretation of the days of creation is that they want to make the Bible agree with science.  Science should agree with the Bible.  There was a time when people thought the earth was flat.  If they had only believed God, they would have known it was round.  (Isa 40:22)

As Christians, we know that God has revealed Himself, and all His will and ways, through the Bible and in a way that we can clearly comprehend.  Trust God and trust His Word.