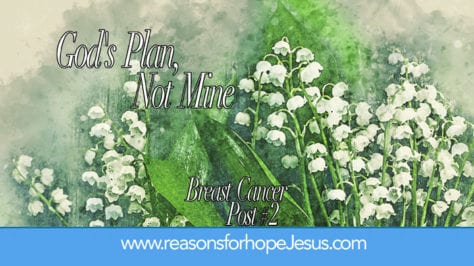 Now that I knew I had cancer, it was time to get busy finding out just how bad it was. (If you haven’t already, read Tamara’s Story: Breast Cancer post #1) The next step was to have biopsies of both breasts. This may seem like no big deal, but for me it was a big deal!

Let’s back up sixteen years. After watching the monitor as they excruciatingly removed two of three pre-cancerous spots with a core needle, I fainted. (My body does not take to any numbing medicine, which makes going to the dentist a major event!) After I came to, I asked them why they didn’t remove the third spot. They replied, “Let’s just see what that one does.” This was a doctor; I was out of pain…I asked no further questions. They told me to come back in six months.

I went back a year later. When the Doctor scolded me for not coming back in six months, I told her that I needed more time to pray about it – which I did diligently. She said, “Well let’s see how your God did.”  When she came back into the room she slapped the x-ray on the light and said, “It’s gone.”  No words came out of my mouth. My smile was all that was necessary.

Subsequent visits over the years showed no further complications. With every self-exam I would say to God, “You’ve got this, right?”

I Wanted to be a Hezekiah…

In those days was Hezekiah sick unto death. And the prophet Isaiah the son of Amoz came to him, and said unto him, Thus saith the LORD, Set thine house in order; for thou shalt die, and not live. Then he turned his face to the wall, and prayed unto the LORD, saying, I beseech thee, O LORD, remember now how I have walked before thee in truth and with a perfect heart, and have done that which is good in thy sight. And Hezekiah wept sore. And it came to pass, afore Isaiah was gone out into the middle court, that the word of the LORD came to him, saying, Turn again, and tell Hezekiah the captain of my people, Thus saith the LORD, the God of David thy father, I have heard thy prayer, I have seen thy tears: behold, I will heal thee. 2 Kings 20:1-5

So here I am back on the biopsy table. The Doctor was very sure I had cancer in one breast. The other one, which I had issues with sixteen years ago, had nothing show up in the 3-D mammogram or ultrasound. They were just checking that one at my request, as I felt something deep inside that one.

To prepare for the pain, this time with the knowledge of cancer in one of them, I went through the file of Bible verses I have memorized over the years. I would recite Psalm 23, Psalm 19 (My fave!) and I would put on the whole armour of God. (Ephesians 6:14-17) I was ready!

God had another plan: another verse. (Maybe one of His faves!) Over and over, as the core needles were digging in, my soul was flooded with, “He is altogether lovely!”

I was simply in awe over this, especially given that the Song Of Solomon was not my favorite book of the Bible, respectfully. At first I thought it was hokey, so I avoided reading it, feeling bad since after all God is the author! Over the years I have found a real appreciation for it. When I realized that it can be understood as symbolically picturing the relationship Jesus has with His bride, the church (which includes me!), it’s actually quite breathtaking.

Reading the Song of Solomon that night was apropos. It is indeed lovely. (I was mildly miffed this time, however, with how often breasts are mentioned – Ha!) Moving on… The bridegroom (Jesus) says this about His bride (His believers), “Thou hast ravished my heart.” Wow! I have ravished the heart of the creator of all things! Selah!

I’m not going to ask why the lover of my soul didn’t heal me all those years ago, or in my nephew Jake’s words utter, “What Doin’?”   After all, His thoughts are not my thoughts, neither are my ways His ways. (Isaiah 55:8) Instead, I am going to trust in the Lord with all my heart; and lean not unto my own understanding. (Psalm 3:5) My beloved is mine, and I am his (Song of Solomon 2:16)