The book is named after its principal character, Ezra, although Ezra is not mentioned in the book as the author. It is, however, believed that Ezra did write that book and it’s known that it originally was part of a larger book that included the books of Nehemiah and Chronicles. Ezra is thought to have used various documents (e.g., 4:7-16), genealogies (e.g., 2:1-70), and personal memoirs (e.g., 7:27-9:15) as his sources. In the Latin Vulgate, Ezra and Nehemiah are titled 1 and 2 Esdras.  The apocryphal book of 1 Esdras (in the English text) is 3 Esdras in the Vulgate.

Although some date the book around 330 B.C., the linguistic similarities it shares with the fifth-century Aramaic papyri from the Jewish community at Elephantine, Egypt, suggest an earlier date during the lifetime of Ezra who lived until the time of Nehemiah (Neh. 8:1-9; 12:36). It is likely that Ezra finished the book between 456, when the events of 10:17-44 took place, and 444, when Nehemiah arrived in Jerusalem.

The book of Ezra records the fulfillment of God’s promise to restore Israel to her land after the 70 years of captivity in Babylon (Jer. 25:11). God used three Persian kings, Cyrus, Darius, and Artaxerxes, to bring this to pass, as well as Jewish leaders such as Zerubbabel, Joshua, Haggai, Zechariah, and Ezra.

The Persian King Cyrus overthrew Babylon in October 539. In accord with his policy of encouraging subject people to return to their homelands, he issued a decree in 538 allowing the Jews to do so (see Zechariah Overview and Outline). About 50,000 people left Babylon and returned under the leadership of Zerubbabel. The foundation of the Temple was laid, but under rising opposition construction ceased and the Temple was not completed until 515 B.C. in the reign of Darius. Ezra 1-6 describe these events and chapters 7-10 tell of Ezra’s return to Jerusalem and his efforts to bring spiritual revival to the people. 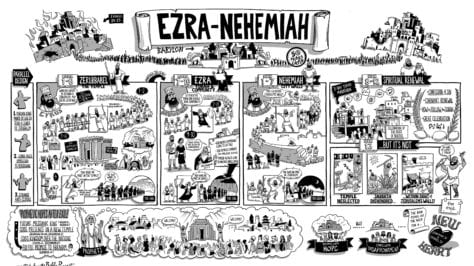