Ephesians delivers the key message of identity in Christ.  In the first three chapters, Paul clearly tells of the riches of Christ and God’s purpose and plan in establishing the Church, the Body of Christ.  In Ephesians 1-3, Paul writes nothing about what Christians should do and everything about what God has done for us.  In Christ, we are blessed (Eph 1:3), chosen (Eph 1:4), predestined unto adoption (Eph 1:5), accepted, redeemed, forgiven, included in Christ, marked in Him, made alive, saved, raised up, chosen, adopted (Eph 1:5), accepted, redeemed (Eph 1:7), enlightened (Eph 1:9), heir of inheritance (Eph 1:11) and we are sealed unto the day of redemption (Eph 4:30).

This letter was also written to overcome a powerful cult that was rising up in Ephesus and the surrounding areas (the cult of Artemis). In the ancient world, everyone worshipped some sort of god as a way to gain power or bring good (i.e. fertility, rain, safety, etc). In Ephesus, there was much divination, (magical incantations and spells) and so Paul wrote about “powers in heavenly places” to help them understand the spiritual realm and God’s truths.

Ephesians is one of four prison epistles (Ephesians, Philippians, Colossians, and Philemon).  They are called this because they were all written during Paul’s Roman imprisonment (Eph. 3:1; Phil. 1:7; Col. 4:10; Philem. 9). It is uncertain whether Paul was imprisoned once or twice in Rome, though two imprisonments seem to fit the facts better. During the time these epistles were written, Paul was kept in or near the barracks of the Praetorian Guard or in rental quarters at his own expense for two years (Acts 28:30). Paul trusted that God would release him (Phile 22).  After Paul’s release, he wrote 1 Timothy and Titus.  When Paul was arrested and imprisoned again, he wrote 2 Timothy. He was martyred after his release from prison. 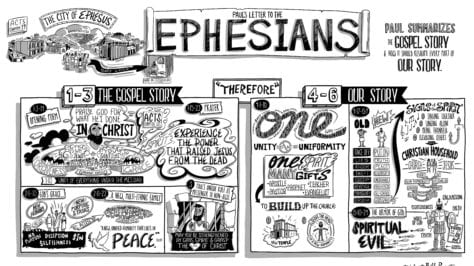