Why the Fish? And What is a Chrismon? 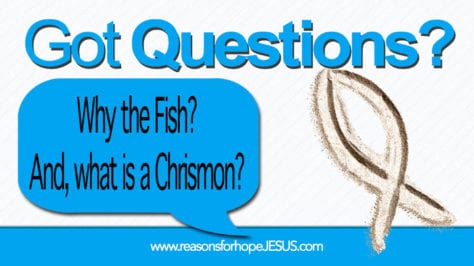 A fish is a Chrismon.  Chrismons are symbols in the Christian faith.  And yet, I’m sure that many, who like them and use them, don’t even know what “Chrismon” means.

It’s really very simple. A Chrismon is a symbol that represents something about Jesus Christ or the Christian faith.   The term Chrismon comes from the Latin phrase “Christi monogramma,” which translates as “monogram of Christ.” There are many Chrismons. Individually, they remind us of some specific aspect of our God and the relationship we have with Him.  Collectively they can tell a story of our faith, and all that Christ has done for us and who we are in Him.

A Fish as a Chrismon

Following the Lord’s baptism in the Jordan River by John, and after His time in the wilderness having been tempted by the devil, Jesus began His earthly ministry.  He began preaching the gospel of the Kingdom of God (Mark 1:14) and calling to Himself those who would be His disciples.  As Jesus walked by the Sea of Galilee, He saw Simon (later named Peter) and his brother Andrew and Jesus called to them:

Follow Me and I will make you fishers of men, (Matthew 4:19)

Fishermen by trade, they left their nets and followed Jesus.  Jesus continued to call His disciples, twelve in all.  These twelve would be taught by Jesus, commissioned to do His work and sent forth as ambassadors in His name.  All, except Judas, were from Galilee, a region in northern Israel that bordered the Sea of Galilee, and most were fishermen, who caught fish not men.

Jesus said He would make them “fishers of men.” This meant that they would be prepared to preach the gospel (symbolically casting one’s net), with the hope that the fish of the sea (unregenerate man in a lost world) would be captured by the net (the gospel of saving grace) and come to know Jesus, the One who offers living water.

In the early days of Christianity a simple fish symbol became a representation of one’s being a disciple of the Lord Jesus Christ.  Around 200 AD, Clement of Alexandria wrote the following in The Teacher (Logos Paidagogos):

“Our seals should be a dove or a fish or a ship, or a musical lyre or a ship’s anchor.  And if someone is fishing he will call to mind the apostle and the children drawn up out of the water.”

“We little fishes are born in water, after the example of our     Ichthys Jesus Christ.”

The Use of the Fish as a Chrismon

First century Christians used the fish symbol to mark meeting places of Christians gatherings and to mark tombs and headstones of those who had died in Christ.  Legend (which may or may not be true) also tells of the use of the fish symbol during ancient times when Christians were persecuted.  When a  Christian encountered someone on a path, the Christian would draw in the sand, or in the dust of the road, a half arc, which is a portion of the fish symbol.  If the other person drew the other arc, completing the “sign of the fish,” it revealed that they were both followers of Jesus and could safely talk about their faith.  The fish symbol was not new when Christians adopted it for their use.  It was a symbol already used by Greeks, Romans, and other cultures.  Therefore it could be used without drawing suspicion, but it was known by Christians to “speak” a message of belief in Jesus.

The Greek word for fish is “ichthus.”  In the Greek language, it is spelled “IXOYE.”  These letters serve as an acronym, a word formed from the first letters of other words.   IXOYE represents the first letter of five Greek words:  Iesous Xristos Theou Yios Sotare.  That translates into English as Jesus, Christ, Son of, God, Saviour.

Just as in the first century, the fish symbol is used in our day to declare faith in Jesus.  It is seen on bumper stickers, giftware, novelty items, tattoos, books and much more.  The “sign of the fish” is a beautiful reminder of many of Jesus’ words and His works. It also reminds us of the work He has commissioned us to do.

Jesus called His disciples to be “fishers of men.” That calling is also intended for all of us who belong to Him.  We are to be His fishermen, and we are to cast our “nets.” We are to preach the gospel of saving grace, so that the “nets” might be filled.

In the Bible, water is symbolic not only of the world but also of judgment.  So when a fish is drawn out of the water, it is symbolic of a non-believer being raised up from under the judgment of God.   The sign of the fish can also be a visual reminder of the miracles of Jesus in which He multiplied the fish to feed the multitudes—at one time 4,000 and at another time 5,000.

The sign of the fish does not hold any special significance beyond that of a useful token to call to remembrance the name of Jesus, His calling of disciples, and His mighty miracles.  While the focus of this symbol is usually linked with our identification as Christians and our mission to be “fishers of men,” the symbol should also evoke a remembrance that, at one time, we were the little fish, that was born in the water and swimming in the lost seas of the world.  We were under God’s judgment until the net of the gospel was cast before us and we were captured by the saving grace of the Lord Jesus Christ. Let the sign of the fish be both a reminder of our great gift of salvation and a motivation to share the saving grace of Jesus Christ with those who are aimlessly swimming in the sea of the world.

The Fish on the Cover of Reasons Book 2 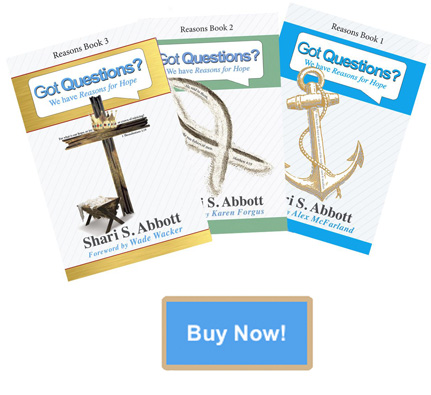 Read Why the Anchor?  and Why the Cradle, Cross & Crown?