Originally one book, 1 and 2 Kings get their names from the fact that they present the history of the kings of Israel. The book begins with the death of King David, and the succession of Solomon to the throne, and ends with the kings of the divided kingdom around 853 — Jehoshaphat in the Souther Kingdom of Judah and Ahaziah in the Northern Kingdom of Israel.

The author is thought, without certainty, to be Jeremiah.  However, someone other than Jeremiah would have written the last chapter since Jeremiah was taken to Egypt (Jer. 43:6-7) and Jewish tradition suggests that he died there.

Historical sources are used and it is both a record of kings and a declaration that the success of any of the kings, and that nation as a whole, was dependent on their faithfulness to God and His law.  Apostasy and disobedience led to decline and downfall, and eventually captivity.

Continuing where 1 Kings concluded (with Ahaziah), 2 Kings traces the decline and captivity of both the Northern and Southern Kingdoms. Israel, the Northern Kingdom, endured a succession of evil kings reigning during a 130-year period until the Assyrian captivity. Second Kings also give the history of Judah, up to the time of Babylonian captivity. The miracle-filled ministry of Elisha is recorded as well as significant accounts that include the raising of the Shunammite’s son (chap. 4), the healing of Naaman, the Aramean leper (chap. 5), the death of Jezebel (chap. 9), and the revivals under Hezekiah (chap. 18) and Josiah (chap. 23). 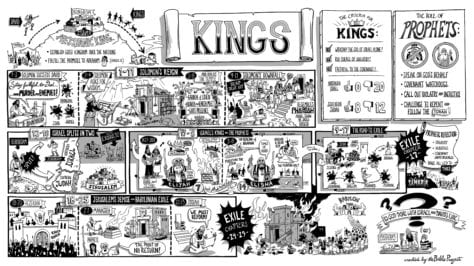