Why is Friday the 13th Considered Unlucky? 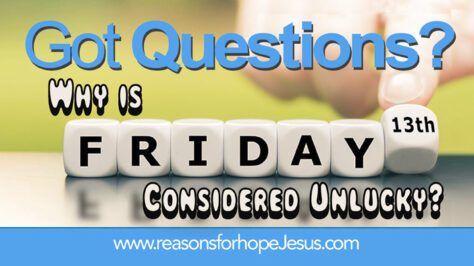 No one really knows where this idea originated.  The question must be asked, why would the 13th day of a month be “unlucky” if it falls on a Friday? And, how should Christians feel about Friday the 13th?

We also know that every day has its share of misfortunes because we live in a fallen and broken world.  Additionally, we know that every day has blessings, because, as children of God, our gracious Father is always giving us good things.  So we should not attribute any misfortune that happens on Friday the 13th as being bad luck. Nor should we fear that something bad might happen on that day.

Instead, stand strong in your faith and…

Trust in the LORD with all thine heart; and lean not unto thine own understanding. In all thy ways acknowledge him, and he shall direct thy paths. Be not wise in thine own eyes: fear the LORD, and depart from evil. (Prov 3:5-7)

There are several suggestions (again, no one knows) about how the superstition of Friday the 13th originated:

An ancient Norse myth claimed that there were 12 dead gods dining eternally at Valhalla (the fabled hall where the Norse heroes feasted).  It’s said the feast of the 12 was interrupted by an uninvited guest, the evil god Loki. He was the 13th person at the feast. And the legend says that he tricked the blind god of winter (Hoor, the son of the supreme god Odin), into shooting his brother (Baldr) who was the seeing god of summer.  Because the evil god Loki was the 13th person, 13 became an unlucky number. But understand this was just a myth.

2. The 13th day of the month was deemed unlucky in ancient Greece.

Around 700 BC. In a farmer’s almanac by Hesiod (titled, “Works and Days”), advice was given to farmers to “avoid the thirteenth of the waxing month for beginning to sow.”  Why?  There’s nothing that suggests a reason for deeming the 13th as unlucky, so we’ll never know.

3. There are patterns of 13 in the Bible that represent lawlessness and rebellion.

In God’s design, 12 is seen as order—12 months in a year, 12 patriarchs from Seth to Noah, 12 patriarchs from Shem to Jacob,12 Tribes of Israel that come from the 12 sons of Jacob, 12 apostles chosen by Jesus, and more (Read:What is the Meaning of Numbers in the Bible?)  Some suggest that exceeding 12 and adding 1 breaks the order and therefore represents rebellion.  We see a pattern where the number 13 represents rebellion in the Bible:  Evil Nimrod (Gen 10:9) was 13th in Ham’s line; The first mention of rebellion is in Gen 14:4, “in the thirteenth year they rebelled;” and references to the Valley of Hinnom are found 13 times in the Bible (this valley was the place of evil, pagan rituals of child sacrifice in worship of false gods). There were 13 people at Jesus’ last supper, with Judas being the 13th guest.

It’s possible the idea of the “unlucky” 13th day being on a Friday is because the day of Jesus’ crucifixion was historically thought to be Friday (But was it? Read Was Jesus Crucified on Wednesday, Thursday, or Friday?)  It also might be because executions were held on Fridays in the late 1800s.   However,  just like with the number, no one knows the reason for it being Friday.

As Christians, we live by a firm and justified belief in the proven and trustworthy Word of God.

Prov 30:5  Every word of God is pure: He is a shield unto them that put their trust in Him.

1 Th 2:13  For this reason we also thank God without ceasing, because when you received the word of God which you heard from us, you welcomed it not as the word of men, but as it is in truth, the word of God, which also effectively works in you who believe.