Why Didn’t the Jews Accept Jesus as Messiah? 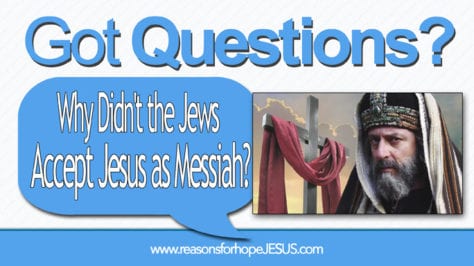 The simple answer is that most Jews didn’t recognize Jesus of Nazareth as their Messiah.  Jesus came as a baby in a manger and lived a humble life.  The Jews were looking for a man, a Messiah, an anointed one who would lead and liberate them.

When Jesus began to preach, His message was one of love for all and humble service. They were still looking for one who would conquer, not for a Suffering Servant who would die.  The Jews were looking for the Lion of the Tribe of Judah, who would reign as King, not the Lamb of God who would take away the sins of the world.

Fully Prepared, Yet Not Seeing

Throughout the Old Testament, God prepared His chosen people to wait and watch for their coming Messiah.  He raised up leaders who directed them and raised up prophets who received His words and spoke directly to them. Additionally, He gave them a sacrificial system that atoned for sin, allowed them to come into His presence, and, in pattern and typology, pointed to the One who would make the final atonement for their sins.

From the beginning, immediately after the fall of Adam, God began preparing man to know His plan of redemption and to be ready to the One who would rescue them:

Genesis 3:15  And I will put enmity between you and the woman, and between thy seed and her seed; He shall bruise your head, and you shall bruise His heel.

God promised that the seed of the women (who is Jesus) would come and bruise the head of the serpent (Satan).  Jesus did just that on the cross.  He defeated Satan and conquered sin and death. But this was not what the Jews expected.  They were looking for Meshiach ben David, Messiah the son of David.  He was to be a King from the tribe of Judah, the line of David.  They missed Meshiach ben Joseph, Messiah son of Joseph, the Suffering Servant who would forgive the sins of His brethren and restore His relationship with them.

Just as prophetic and revealing as the prophet’s words, were the signs and wonders, typology and patterns, that God gave to His people.  All these were gifts of God meant to point them to their coming Messiah and prepare them to recognize Him.  Now, consider the Feasts of the Lord.

God ordained that there should be three annual festivals (Lev 23).  Passover was the annual feast in the Spring– a feast ordained by God as a remembrance of what He had done in delivering Israel out of the land of Egypt and out from Egyptian bondage.  Every part of the feast pointed to a coming Saviour, a coming Messiah.

The Feast of Passover called for the sacrifice of a pure lamb.  One lamb for every house.  This sacrifice had first taken place in Egypt right before the tenth plague on Egypt (the death of the firstborn).

Exo 12:12  For I will pass through the land of Egypt on that night, and will strike all the firstborn in the land of Egypt, both man and beast; and against all the gods of Egypt I will execute judgment: I am the LORD.

The people were instructed to take a pure and spotless lamb, to kill it, and then to put its blood on the side posts and the top lintel of their doors.  Then, when the Angel of Death came to kill the firstborn and the gods of Egypt, their homes would be passed over, because of the blood. Their firstborn would live.  In the Levitical sacrificial system, God ordained that this ritual be repeated yearly in remembrance of what He had done in sparing the firstborn.

Just as the blood of the first Passover lambs (Exodus 12) was placed over the doors of the Israelites’ homes to cover their house and protect the firstborn from the Angel of Death, Jesus’ blood covers us (Romans 4:7).  Not only does Jesus’ blood cover us, His blood also completely removes our sin (Psalm 103:12) by paying the penalty for them (Romans 4:25).  We are washed by His blood (Revelation 1:5) and “made free from the law of sin and death” (Romans 8:2).

The Messiah Came as a Suffering Servant

To this day, the Jews do not recognize the Suffering Servant, who died on the cross. When they read the words of the prophet Isaiah (chapter 53), they do not see the fulfillment in Jesus’ death.  Instead, they read these prophecies that are yet to be fulfilled in Jesus’ second coming, and deny Jesus as Messiah because He did not fulfill them. The yet-to-be-fulfilled prophecies include:

The Jews are correct that Jesus did not do those things in His humble incarnation.  Jesus came to live the perfect, sinless life—the life we cannot live—and then to die the death that we should die.  He died for our sins, paying the penalty for them and taking upon Himself the wrath of God that should have been poured out upon us.  In doing so, He made available forgiveness of sins to all who come to Him in repentance and trust. One day Jesus will come again, and He will fulfill all of the prophecies and promises that are yet to be fulfilled.

When Jesus comes again, He will come as the King of Kings and the Lord of Lords.

Revelation 19:11  And I saw heaven opened, and behold a white horse; and he that sat upon him was called Faithful and True, and in righteousness he doth judge and make war.

Revelation 19:16  And he hath on his vesture and on his thigh a name written, KING OF KINGS, AND LORD OF LORDS.

Jesus will judge the living and the dead.

2 Timothy 4:1  I charge you therefore before God and the Lord Jesus Christ, who will judge the living and the dead at His appearing and His kingdom:

Jesus will make ALL things new.

Revelation 21:5  And he that sat upon the throne said, Behold, I make all things new. And he said unto me, Write: for these words are true and faithful.

The Lamb Before the King

A most significant point that the Jews, and other non-believers, do not realize is that you do not want to stand before the coming King without the blood of the Passover Lamb.  The King will come in judgment and He will judge the world.

Acts 17:30-31  “Truly, these times of ignorance God overlooked, but now commands all men everywhere to repent, because He has appointed a day on which He will judge the world in righteousness by the Man whom He has ordained. He has given assurance of this to all by raising Him from the dead.”

If you don’t have the forgiveness of sins, that only the Lamb of God can give (John 1:29), then you will perish on judgment day.  For those who trust in Jesus, and have received His forgiveness, we are promised:

Because Jesus died the death we should have died and paid the penalty for our sins, we are forgiven.  Because Jesus rose from the grave, conquering death, we have eternal life in Him.

Be diligent to share the gospel of saving grace every day and in every way — by what you say and by how you live your life.  All around us, there are dead people walking.  Tell them how they can have life and have it to the fullest…