What is the Pride of the Iron and the Power of the Flame? Parable of the Axe, Saw and Hammer 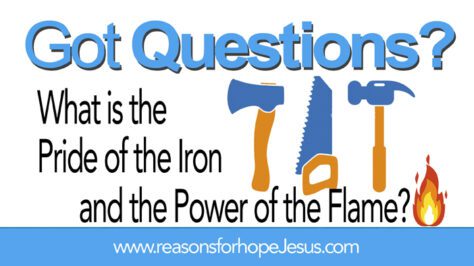 A parable is a short story designed to teach a moral or a faith-focused lesson.  Jesus told many parables, like the parable of the sower, parable of the talents, etc. He told these short stories to give us a better understanding of who He is — i.e. His Person and His works — and who we are — i.e. sinners in need of a Saviour.

In this parable, we learn of the true and better power, perseverance, and providence of our mighty God.

The Pride of the Iron and the Power of the Flame

A large piece of iron stood strong and upright, pridefully boasting and defying anyone or anything to change its form.

And  he hit the iron with power to make a cut. But with every strike, his edge became more blunt and his power diminished.

— “If any can strike a blow, I can,” said the hammer.”I’m stronger than the edge of an axe or and I don’t have teeth of a saw that wear down.I can hit hard and crush with blunt force.”

But after only a few strong and mighty blows, the hammer’s head flew off.  His strength was gone, his efforts were futile, and his confidence was shattered.

The proud iron remained unchained by the power of the axe, the perseverance of the saw, and the strength of the hammer.Each had tried to change the iron. But each had failed.

Then came a small, brightly glowing, flame. “May I try?” asked the small flame in a quiet whisper.

Thinking the small flame to be foolish and his efforts would be futile, the axe, the saw, and the hammer all laughed. They mocked the flame, saying:

“You think you are more powerful than we three? You aren’t even a blazing fire. You’re just a flickering flame. Do you really think you can change the iron, when we were unable to do so?”

With the heat of desire, the light of faith, and confident expectation, the small flame replied,”I know I can change the iron. Let me show you the way.”

Within seconds, the small flame grew larger.  His flame flickered brighter and his heat grew increasingly hotter.  The small flame became a mighty fire, and he wrapped himself around the iron and held it with great power and strength so the iron could not move.

Now in a molten state, the iron’s impurities were burned off, revealing beautiful potential.  And in the hands of the Grand Designer, the iron was formed into a new creation of greater beauty and grander purpose.

The Flame of God’s  Love

God’s flame is a flame of love, and His fire has immutable power, immeasurable perseverance, and immense strength.  His flame is never diminished, never wearied, and never futile.  His flame is abounding and eternal and it ignites a flame of love in the hearts of all His children —  a flame that will light a fire to melt and purify the heart, soul, and mind so the Grand Designer can conform His children to into the image of His precious Son (Rom 8:29).

What Did the Axe, the Saw, and the Hammer Learn from the Fire?

The ability to make a change does not reside in the power, perseverance, or strength of a tool.  Real change comes from  the light and love of the Grand Designer — the illuminating light and the burning love of His flame and His fire are transforming:

John 3:16  For God so loved the world, that he gave his only begotten Son, that whosoever believeth in him should not perish, but have everlasting life.

John 1:4, 8:12  In Him was life; and the life was the light of men. [And Jesus said]  I am the light of the world: he that follows Me shall not walk in darkness, but shall have the light of life.

With the flame of God’s love in our hearts, we are a new creation.  And with His Holy Spirit burning inside us, we are being conformed to the image of Jesus (Rom 8:29).  We no longer have a heart of stone (or iron). We have a new heart, a heart of flesh. (Ezek 36:26)

[Read about the new heart here]

Let God’s flame grow into a massive fire that consumes your every thought, word, and deed.  Let His flame fill your heart and fuel your soul. And let His fire refine you for His service.

Now the God of peace…even Jesus our Lord, equip you in every good thing to do His will, working in us that which is pleasing in His sight, through Jesus Christ, to whom be the glory forever and ever. Amen. (Hebrews 13:20-21)