The author is unknown, though Samuel is suggested by some. The events of the book of Ruth took place during the period of the judges (latter part of the 12th century B.C.), but the book was not written until later. Notice that the author explains customs that were no longer being practiced (4:6-8.)

Chapter four gives a genealogy from Perez (the illegitimate son of Tamar and Judah  Gen 38:1-3) to Obed (the son of Ruth and Boaz) and beyond to David (son of Jesse), which strongly suggests that the book was written during David’s reign as King of Israel. If it had been written later, it likely would have extended beyond David to include Solomon.

The book of Ruth tells the story of ordinary, though godly, people during the turbulent period of the judges. It shows an oasis of faithfulness in a time marked by idolatry and unfaithfulness.  It is a book that presents a typological picture of Jesus, Israel, and the Church.

Moab represents the world, to which Elimelech took his family when there was famine in Bethlehem (means the House of Bread).

Elimelech’s family is a type of Israel’s suffering [illustrated by the deaths in the land of Moab.

Naomi is a type of prodigal Israel, who left/rejected their Messiah and will return/seek Him.

Orpah is a type of a professor, but not a possessor.  She first desired to go with Naomi to Bethlehem, but turned away and went back to the world.

Ruth is both a professor (“your God will be my God” 1:16) and possessor who returned to Bethlehem with Naomi (1:19).  Ruth is also a type of the Gentile Bride of Christ.

Boaz was the kinsman redeemer, who redeems Naomi by marrying Ruth and he is an example of the Kinsman Redeemer, Jesus, who God would send to redeem mankind.  Boaz met all the requirements of a kinsman redeemer:  a blood relative (Rom. 1:3; Heb. 2:14) with the ability and willingness to pay the price to purchase the forfeited inheritance (1 Peter 1:18-19, Heb. 10:7).

The typology of the book of Ruth is rich and revealing.  It paints a beautiful picture of God’s love and faithfulness as well as His perfect plan of redemption and His sovereignty in caring for His people (Ruth 2:12). 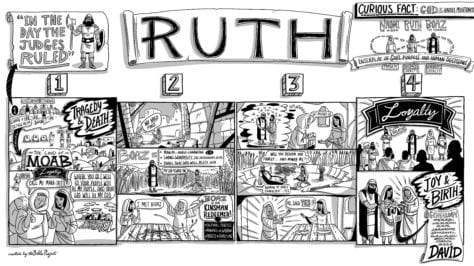