Alone, Yet Not Alone by Joni Eareckson Tada 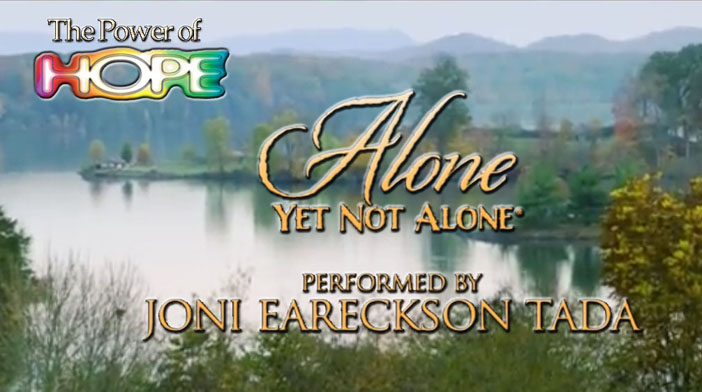 Scroll down to watch a movie clip and hear Joni Eareckson Tada sing the song.

As Christians, we know and understand the meaning of the words “alone yet not alone.”  For Joni Eareckson Tada, a quadriplegic who lives those words so fully in her life, we find a beautiful testimony to the sustaining grace found in Jesus Christ and the strength that comes from knowing Him.

…My grace is sufficient for thee: for my strength is made perfect in weakness. Most gladly therefore will I rather glory in my infirmities, that the power of Christ may rest upon me.Therefore I take pleasure in infirmities, in reproaches, in necessities, in persecutions, in distresses for Christ’s sake: for when I am weak, then am I strong.

The words in verse 9 are from the Lord Himself, and give us His promise of sufficient grace in all things and the strength that comes from Him — because we truly are never alone.  The apostle Paul then confirms that promise and speaks of the strength he found in Christ… “for when I am weak, then am I strong.”

In difficult times I turn to those words to remember the grace I have been given, and it strengthens me and gives me rest.

In good times I rest in those words and the amazing love of God for a sinner like me.  There is comfort and strength found in His presence and grace.

In a beautiful song, Joni Eareckson Tada shares what it means to find strength in the Lord, especially when we feel alone.  We can take comfort in knowing that we are never truly alone.  The Lord is always with us, for He has promised, “…I will never leave thee, nor forsake thee.” (Hebrews 13:5)

The Song: Alone Yet Not Alone

Alone Yet Not Alone is the title song of the movie by the same name that was produced by Enthuse Entertainment, a relatively unknown movie production company from Texas.  It was quite a surprise when this song was recently awarded an Oscar nomination.

The movie, released in September 2013 and screened in only nine cities, is about a family who flees Germany and sails to America to escape religious persecution.  Sustained by their faith, they begin to build a new home but face many difficulties.

The movie is a historical drama based on a true story of the faith and courage of two sisters who are kidnapped by the Delaware Indians during the French and Indian War.  The young girls find strength through their faith in God and by recalling the comforting and promising words of an old family hymn, “Alone Yet Not Alone.”

Although endorsed by many conservative Evangelicals including Dr. James Dobson, formerly Focus on the Family, Tony Perkins, president of Family Research Council and Rick Santorum, former presidential candidate, the film failed to garner national attention.  This nomination for Hollywood’s greatest honor should do just that, and also move Americans to watch this movie of Christian faith.

The movie is scheduled to release in theaters nationwide in June.

Joni Eareckson Tada’s story of life in a wheelchair for more than 47 years is known by most Christians.  Her life has been a testimony to the strength that comes from resting faith in the work of Jesus Christ and His power, given through His Spirit.  Joni Eareckson Tada’s recording of this song is a true labor of love.  With limited lung capacity due to her disability, during the recording of the song Joni’s husband Ken had to push on her diaphragm to give her enough breath to hit the high notes.

When interviewed about the song’s nomination, Joni recalled her feelings when she was asked to give her voice to the music.

“When I heard the simple, melodic ballad, I wanted to record it. I really resonated with the words—after all, I sit down in a stand-up world and often feel alone; but of course, with my faith in God, I’m never really alone! The Bible is filled with stories of God picking ill-equipped, unskilled people for places of great influence, which is how I feel as a quadriplegic singing an Academy Award-nominated song.”

Perhaps with the Oscar nomination of this song,  the movie Alone Yet Not Alone will be widely acclaimed and seen by both Christians and non-Christians.  The movie and song, along with an awareness of Joni’s life as a quadriplegic and her faith in the Lord,  could serve as a powerful testimony to both the lost and the saved.

Now take a moment and listen to the Academy Award Nominated Song, Alone Yet Not Alone, sung by Joni Eareckson Tada.

About Enthuse Entertainment: Producers of the movie, Alone Yet Not Alone (June 2014 release) and To Have and To Hold (release date TBA) Enthuse Entertainment’s vision is to produce God-honoring, faith-based, family-friendly films that inspire the human spirit to seek and know God.  Proudly proclaimed on the company’s website are these words, “For from Him and through Him and to Him are all things. To God be the glory forever, Amen.” Romans 11:36  For more information, visit http://www.enthuseentertainment.com

About Joni Eareckson Tada: Joni Eareckson Tada is a Christian who boldly proclaims the gospel of saving grace in Jesus Christ.  As a quadriplegic for more than 47 years, she shares her story and her faith as the author of more than 50 books and at speaking engagements worldwide.  As the Founder and CEO of Joni and Friends International Disability Center, she is an international advocate for people with disabilities.  For more information, visit  http://www.joniandfriends.org