Is it Okay for a Christian to be Cremated 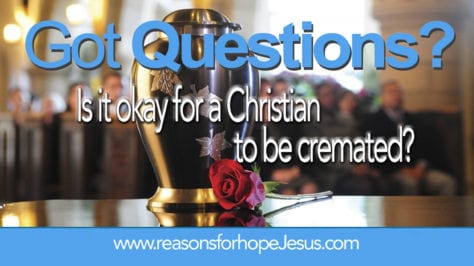 Q. Is there anything in the Bible that speaks against cremation?  Is it okay for a Christian to be cremated?

A. There is nothing in the Bible commanding that a body must be buried.  Nor is there anything that suggests today’s practice of cremation is unacceptable. Let’s consider what the Bible does say about death and the physical body.

We know that the soul and the spirit depart from the physical body at death. So disposal of human remains (the physical body)  is about dealing with the “vessel” that the soul and spirit inhabited. We also know that God created man to have a perfect body that would never die.  However, everything changed when sin entered the world and brought both physical and spiritual deaths.

Romans 6:23  For the wages of sin is death; but the gift of God is eternal life through Jesus Christ our Lord.

Spiritual rebirth is the gift of God at salvation and is received only by those who trust in Christ. Physical death of the body, however, will be experienced by all people. And Christians must consider how their bodies will be disposed.

Cremation in the Bible?

In ancient Israel, bodies were ceremonially buried or laid in tombs as methods of disposing of human remains. The Bible does, however, record two times that bodily remains were burned by fire by the Israelites.

The first is the bodies of Achan, his sons, and his daughters.  Achan, because of his disobedience, was stoned to death.  So also were his children. Following their deaths, their remains were burned, then buried.

The second example is that of King Saul and his three sons.  Following their deaths in battle, their bodies were burned, and then their bones were buried.

1 Samuel 31:12-13 all the valiant men arose and traveled all night, and took the body of Saul and the bodies of his sons from the wall of Beth Shan; and they came to Jabesh and burned them there.  Then they took their bones and buried them under the tamarisk tree at Jabesh, and fasted seven days.

Although this differs from cremation because their remains were not reduced to ashes, these two instances give reason to believe that modern day cremation is acceptable to God.  In neither case did God rebuke His people for having disposed of bodies in a manner other than their traditional method of burial.

There are also historical records of the Romans disposing of dead bodies by fire (as depicted in the movie “Risen”). However, the Bible does not record this Roman practice.

According to industry statistics (www.cremationassociation.org), cremation has nearly doubled over the 15 year period from 1999 to 2014, increasing from 24.8% to 46.7%.   It is believed this increase is primarily due to the cost of cremation versus a traditional funeral.  Burial or cremation is a personal choice, and for Christians it should be made prayerfully and thoughtfully.

What about the bodily resurrection?

Christians often raise questions about how cremation might affect the bodily resurrection that is promised by God. The Bible clearly states that God will raise the bodies of believers from the grave:

1 Thessalonians 4:16  For the Lord himself shall descend from heaven with a shout, with the voice of the archangel, and with the trump of God: and the dead in Christ shall rise first.

When the bodily resurrection takes place, bodies that have been in the grave for a long period of time would be fully decomposed and reduced to dust.  God can, and will, raise the remains of both the bodies that are dust those that are ashes.

If someone’s ashes have been scattered, God certainly is able to gather those ashes together to be raised. This is supported by the amazing works of our Almighty Omnipotent God and the truth and faithfulness of His Word.  He says He will raise the bodies of believers and He will…even if the ashes were scattered.

It is reasonable to think that cremation is acceptable to God. God cares more about how we respect and honor the deceased body than how we dispose of the remains.  Remember, He did not rebuke or condemn the burning of the bodies in Joshua 7 or 1 Samuel 31.

Burial or cremation is a personal decision. The choice that each of us must make is whether to have a funeral and then have our body buried, or to have our body cremated and then have a memorial service. But whether burial or cremation is chosen, the body should be handled in a way to show respect to the person who died and to honor God who created the body and gave it life.

Related article:  In Genesis 3 Adam and Eve died spiritually and they began to die physically. Read: Is there an error in Genesis 2:17 because Adam & Eve did not physically die?