Jesus had to go…

On January 15th, 2013 I shared with you the controversy over a painting of Jesus hanging in an Ohio middle school.  The article “Should I stay or should I go” featured this picture and told of objections to the painting by the Freedom from Religion Foundation (read the previous article here) 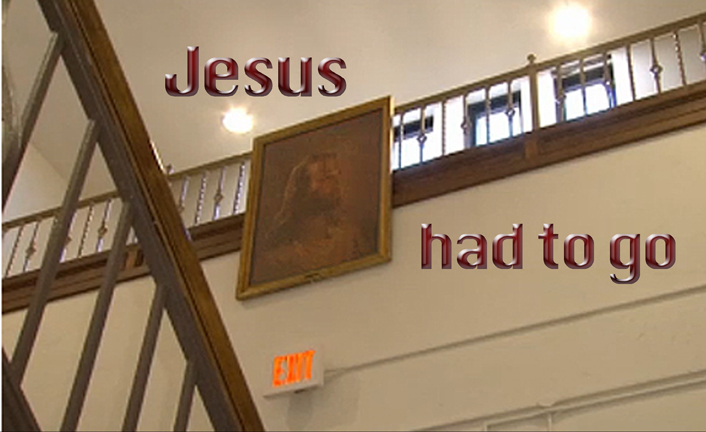 You might remember that back in January, the school board for the Jackson, OH schools voted to allow the painting to remain in the hallway of the middle school.  But just last week (three days after Easter), the painting was removed from the location where it has hung since 1947.

The reason given was “…concerns about the potential costs of a federal lawsuit against its display.”  After overwhelming public approval to keep the painting, the school board reversed its decision, because … “The American Civil Liberties Union of Ohio and the Madison, Wis.-based Freedom from Religion Foundation had sued on behalf of a student and two parents, calling the portrait an unconstitutional promotion of religion in a public school.”

So the Jesus painting had to go.

We leave you with one thought….

It’s been shown, time and time again, that the world can take away images of Jesus or other displays of Christianity from schools and public places.  We’ve seen His name and His message taken out of text books and other media.   But, we must always remember, no one can ever take Him away from you. We can be stripped of everything in this life, except Jesus.  He is with us always.  He is faithful and true…and He has promised: