Is Common Sense Dead? A Must Read for All People! 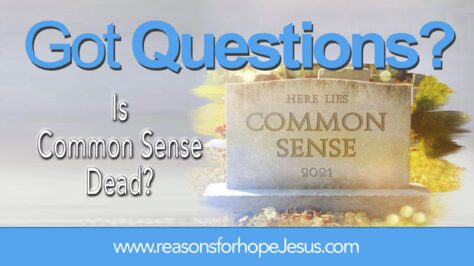 2021 has been an incredibly difficult year of unprecedented events with things happening that we never could have imagined two years ago.

As Christians, we have the Word of God for wisdom and guidance in life.  But what about other people?  In years past, even non-Christians lived with Judeo-Christian morals, values, and ethics.  And almost all people believed in the self-evident truths of God.  But all that has changed.  There once was a common sense that was universally held, but it is not that way anymore.

With all the darkness we experience today, let’s lighten the feelings of discouragement with a little humor.  While this is funny, it is also alarmingly true.  It’s the obituary of our old and faithful friend, Common Sense.  He may be gone, but we can be certain: The grass withers, the flower fades, But the word of our God stands forever.” (Isa 40:8, 1 Pet 1:24c-25a)

Common Sense, a beloved old friend, has died. We mourn his passing.  He will be greatly missed.

His age is unknown because his birth records were lost long ago in bureaucratic red tape. He died sometime this year in 2021. The date is uncertain because he passed quietly from this earth and few people even noticed.

Common Sense will be remembered as having lived by knowledge and reason and having shared his wisdom with all who would listen. He shared some of life’s most basic lessons, such as when it’s time to come in out of the rain, the early bird gets the worm, and a penny saved is a penny earned.

And for those who were interested, he also shared some of life’s most important lessons, including: a house divided cannot stand, don’t let the sun go down on your anger, don’t borrow trouble, laughter is the best medicine, people in glass houses shouldn’t throw stones, hold your tongue, there is nothing new under the sun, united we stand and divided we fall, and more! *

He practiced sound financial policies and didn’t spend more than he earned. He also believed in time-proven methods like adults being in charge, not children, and healthy eating and exercise for good health. However, his health began to deteriorate when overbearing regulations were imposed in his workplace and caused stress, headaches, and eventually his termination. People began to ignore his counsel and many just forgot about him altogether.  Alone and lonely, Common Sense became confused when he heard reports of:

Common Sense’s health continued to deteriorate when he heard:

Then, Covid shut down the whole world. And Common Sense became anxious, depressed, and filled with despair.  He became totally discouraged when doctors had no treatment for the cause of his despair and declining health, and they only prescribed drugs to help him sleep.

Common Sense started losing his will to live when:

Shortly before his death…

Common Sense was injured when he fought off a burglar in his home. Later the burglar sued him for assault. Then Common Sense had a heart attack when he heard of men having surgeries to become women and women to become men. And then he had a stroke when he learned that constitutional rights were being redefined and restricted. Finally, he gave up any will to live, not wanting to catch the disease of insanity sweeping like a plague across the world in 2021.

Very few people noticed Common Sense’s declining health. He died alone having been preceded in death by his parents Truth and Trust, his wife Discretion, his daughter Responsibility, his son Reason, his brother Discernment, and his three sisters Knowledge, Belief, and Faith.  Common Sense is survived by four grandchildren, What Now, Oh No, Can it Be, and Help Needed.  They greatly mourn his passing.

Common Sense is also survived by his estranged step brother, Half Wit, and his six children, Know My Rights, Want It Now, Always Right, Not at Fault, I’m A Victim, and I’m the Greatest.   They were shocked that Common Sense held on for so long.

Rest in Peace, Common Sense.  We miss you greatly.

* all of the sayings in blue bold text, above, can be found in the Bible. Get the book,“Who Said that? Common Everyday Sayings”  to find out where they are found in Scripture and also who said them.