Halls of Education or Indoctrination? 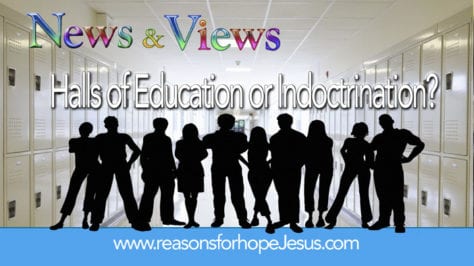 “And even as they did not like to retain God in their knowledge, God gave them over to a debased mind, to do those things which are not fitting” (Romans 1:28 – NKJV)

I have been blessed of God to experience many years of life on this creation of His. And it is from all that I’ve been exposed to, able to see, able to hear, able to know and understand over the several decades of life God has graciously granted me, that I believe I can speak to current matters, matters that I believe are so very important for us to take note of.

I am motivated in my endeavor by an event that is taking place in our country. Schools, both high and middle schools (maybe even lower grades), are allowing young students to leave the classrooms and march in the streets in support of politically sensitive issues. Our young people are marching in the streets to speak out on the issue of climate change.

School administrators and teachers, the vast majority of them being products of liberal educational institutions, are arming our young people with their liberal/socialist views that they wish to bring to bear on our nation. It is a planned movement, one meant to bring about what I believe is will eventually be detrimental to America, or at least, the America as we currently know it. And the instruments used in this effort are our very children, those who supposedly are attending the halls of education.

You can be sure that the message being espoused from the lips of our children’s instructors are not ones that would challenge our young people to consider the differing views that exist on both sides of this climate issue. How do I know this? I’ve listened.

I fear, as I consider this matter, that what I have seen over the last several decades of those who now instruct our young people, that they are a people who know doubt “do not like to retain God in their knowledge,” and they are on a mission to bring about “those things which are not fitting.”

When I was in school the intent was known by all; teach and learn the essentials, like reading, math, science, social studies, history, etc. The teachers were committed to these subjects and students needed to be committed to learning them. If I may note right here, we were never dismissed from class to march in favor of one political view or another . . . never! But then, when I went to grade school, as I would enter my homeroom I would see a picture of George Washington kneeling by his great white horse Traveler, praying. As I would leave the classroom, hanging on the wall by the door was a plaque with the Ten Commandments on it.

But as we have steadily turned away from the God who gave us those commandments, we have taken on more and more of, “a debased mind.” And this has caused us as a nation to not be able to steer the ship on a proper course any longer. Left to our own thinking we are seeing, with our own eyes, a once-great nation, slipping into a form of government that will be one of the elites and the have-nots, a socialist government that will, as it has every nation that has installed such a form of rulership, be the end of what once was a great idea with a great foundation.

College grads over the past decades, with the indoctrination of their godless and liberal professors firmly seated in their hearts and minds, are marching our young people to the tune of their liberal doctrines. Our halls of education have become halls of indoctrination. It is a scary thing, and so serious that I’ve found the vast majority of people don’t want to even deal with it. That is evident by the giving over of our young people to a public education system that promotes the very ideals our founding fathers would find reprehensible!

I’ve lived in a socialist country, where a dictator (the elite one) ruled the roost. I’ve seen the effects of the elite rulers and their social justice system, as they impose their will on the have-nots. I’ve seen the socialized hospital systems that are not for the elites but for the every-day citizen. It is not a pretty thing to see. Note well that the way we’re heading, when we hear what is being espoused today from potential political parties, is into a type of government that seeks this very social structure. And they do so by turning halls of education into halls of indoctrination.

What do I mean? In Hampton Sides’ book, On Desperate Ground, he gives historical background on the nation of Korea. He notes how the nation, after WWII, was divided into two countries; north and south. The north was governed by a communist dictator (appeasing Russia and Communist China) and the south by a leader installed by the U.S. and the United Nation. Wasn’t long before the north (as socialist/communist regimes always attempt to do) invaded the south and, by its military might, pushed the south’s people all the way to the sea, leaving death and destruction in its wake. For those of the south, that did not fall in line with the north’s totalitarian views, they were either eliminated or sent to what was called, “places of indoctrination” (take note). These places were designed by the north to either get you to submit to communistic rule and ideology or, put an end to you for daring to hold to any other concept of governing.

These halls of indoctrination are before us! They carry the heavy hand of socialist teaching and they are influencing the minds of our youth. They are no longer halls of education but that of indoctrination. They have local names and national names we are quite familiar with. They are our high schools, middle schools, and even grade schools (get them early is the cry). They are Harvard, and Yale, and Stanford, and so many, many more.

While running for president several years back, Barak Obama said to Joe “the Plummer,” “We have to spread the wealth Joe.” At that time when this presidential candidate said this, did you catch where he was going? Current day mayor of New York, says, “There is plenty of money out there, it’s just in the wrong hands.” How about that saying, did you catch the drift of it?

I attempt to write from a platform of experience, from one of having been around. I’ve been stung by what I see as I witness school-age children leaving their classrooms and marching in the street for something I don’t think they really know much about, except for what they’ve been indoctrinated with. And to me, this, along with many other leanings in our nation, is extremely alarming.

I would, as a Christian, pray, “God help us to know and understand what is going on around us.” But I fear that we are a nation who does “not like to retain God in (our) knowledge,” and such, He has “given us over . . . to those things which are not fitting,” to those things that eventually bring a nation to its knees.

I never agreed with author and activist Ayn Rand in her atheist views, but years ago I read her book, We The Living. It was her initial book which she wrote as her first statement against communism, being as close as she came to writing an autobiography. It was a most sobering reading. One could not miss the horror of Russia’s fall into a totalitarian state and the terrible effects it had on the people. I would recommend it be read by every young person in this nation today. Ms. Rand may not have believed in God but she had experienced the horrors of the communist state, and the book highlights those horrors. And if you don’t like reading then get the video The Mortal Storm and view it, for it also depicts a government of elites (this time Fascism) and those who are, by the determination of the elites, considered to be societal subjects, or in reality, the have-nots.

Note well, that the nation that is blessed is the one “whose God is the LORD (Yahweh; the God of the Bible, the God and Father of our Lord Jesus Christ)” (Psalm 33:12).  Since, according to the Bible, there is no other God but “the LORD,” beware of that form of thinking that is propagated by those who make a point to “not . . . retain” Him in that which they think and endeavor to do, for it is inevitable that they will do “those things which are not fitting.”