Why Did God Create Man Knowing Man Would Sin? 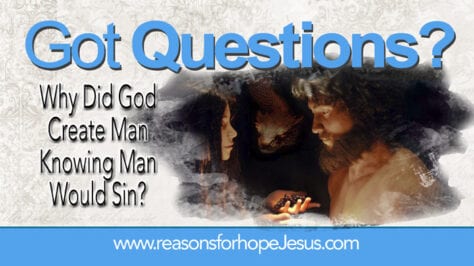 Let’s remember that God created a world that was perfect and a man who was sinless (Gen 1:31). But it’s true, God knew before He created man that man would sin. He knew that both the man and the woman He created would disobey Him and that it would change everything in His perfect creation.  With that understanding, let’s address the question. But first, let’s remember why God created the earth and everything in it.

Revelation 4:11  … thou hast created all things, and for thy pleasure they are and were created.

God created a perfect earth, with a beautiful garden and living creatures. He could have stopped there and not made man.  That certainly would have magnified His creative nature throughout the universe and it would have brought glory to His name.  However, God desired to make a creature that bore His own image.

God created man in His own image, to be His steward of the perfect earth He had created, and to have dominion over all the living creatures He had created.  This would glorify the name of the Lord and reflect His image.

Isaiah 43:7  Even everyone that is called by my name: for I have created him for my glory, I have formed him; yea, I have made him.

The Purpose of Man

Man was created for God’s glory (Isa 43:7) and for His pleasure (Rev 4:11).  That was true of Adam and Eve, and it is true for all mankind throughout all history.  Our purpose in life is to please God by living in a way that honors and glorifies Him. We are to be His stewards and His ambassadors on earth, living in right relationship with Him.  The Westminster Shorter Catechism explains this well:

“Man’s chief end is to glorify God and to enjoy him forever.”

So how do we bring pleasure and glory to God?  And how do we enjoy Him?  The answer is,

Yes, God Knew That Man Would Sin. So Why Create Man?

Genesis 1:29  And God said, Behold, I have given you every herb bearing seed, which is upon the face of all the earth, and every tree, in the which is the fruit of a tree yielding seed; to you it shall be for meat.

Genesis 2:9  And out of the ground made the LORD God to grow every tree that is pleasant to the sight, and good for food; the tree of life also in the midst of the garden, and the tree of knowledge of good and evil.

We must first remember that God does not tempt anyone to sin. Therefore, the tree of the knowledge of good and evil was not a temptation, nor even a test.  God placed that tree in the garden to give man a choice.

Genesis 2:16-17  And the LORD God commanded the man, saying, Of every tree of the garden thou mayest freely eat: But of the tree of the knowledge of good and evil, thou shalt not eat of it: for in the day that thou eatest thereof thou shalt surely die.

God was overwhelmingly gracious to Adam and Eve by giving them abundant vegetation from which to eat.  But God wanted man to love Him by choice. So God created man with free will and gave him an opportunity to choose to obey or to disobey.  Only by choice can true love exist.  If there were no choice, they would simply have been “puppets” and desire/love would not exist.

By creating the tree of the knowledge of good and evil, and by forbidding Adam and Eve to eat from it, God gave them the choice needed to demonstrate their love and devotion through their obedience.  He also gave them a motivation to obey by telling of the consequence of disobedience.  It would be death.

Sadly, by disobeying God’s command and partaking in the forbidden fruit, Adam chose to put himself and his desires above God.  In doing so He dishonored his Creator. At that moment his love for God was replaced by his lust and desire for that which God had forbidden. And we all know what happened.  Adam plunged the world into sin and death.

Yes, God knew Adam would sin. So back to the question, “why God would create man knowing that man would sin?”  While we cannot speak with certainty because God does not explicitly answer this, I suggest that even in man’s sin, God is exalted.

God is Magnified and Glorified

Remember that God created man for His pleasure and for His glory.  Because He created man in His image it is reasonable to say that, as image-bearers of God, man was created to magnify God throughout all creation, and in all time, by reflecting God’s attributes.  Man was created to live and love like God.

When Adam sinned, God could have killed him immediately for his disobedience.  Instead, God manifested His amazing and abundant mercy by not killing Adam.  Therein lies the answer to our question.  Without sin, there would have been no need for mercy.

So God created man knowing that he would sin and knowing that He could, and would, pour out His mercy for all creation to behold.  By forgiving Adam and clothing his nakedness God’s mercy was demonstrated — a mercy that had never been seen before (remember Satan’s rebellion was judged and condemned, not forgiven).  Additionally, God poured out His grace as never before by promising a Rescuer who would redeem man from his sin and restore him to right relationship with his God.

The fall of man magnified God’s purposes and plan in creating a creature in His own image, God’s omniscience of man’s free-will, and God’s mercy and grace in forgiving man.

Oh, what a powerful and mighty God we have.  He is our Creator, Redeemer, Sustainer, Rescuer, and Restorer.  There is none like Him.

The simple answer to the question, “Why did God create man knowing he would sin?”

Because God had a purpose and plan, from eternity past, to manifest and magnify His great mercy by forgiving man’s sin and His amazing grace by sending Jesus to restore fallen man’s relationship with Him. In doing so, God demonstrated His unbounded, unconditional, unfailing love for His creation.  A love that He offers to all people at all times.  A love that will forever magnify His Name throughout all eternity.  And one day, every knee shall bow and every tongue will confess that He is Lord of all. (Isa 45:23-24, Rom 14:11, Phil 2:10)

To the only wise God our Saviour, be glory and majesty,
dominion and power, both now and forever. Amen.
(Jude 1:25)