Were there flood survivors in addition to Noah and his family? 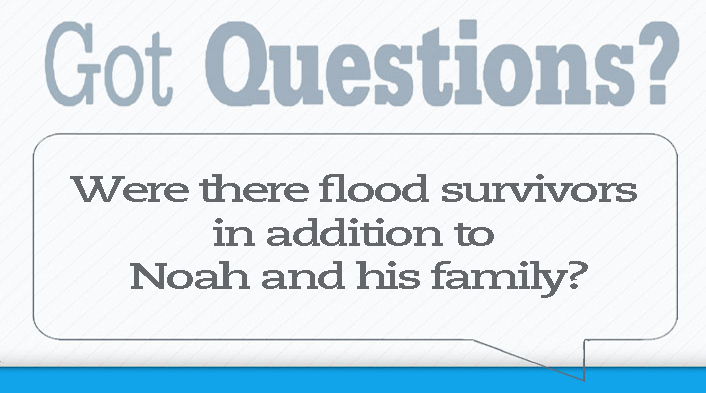 Q.  A friend says he traveled abroad and learned that after the flood there were other survivors besides Noah and his family. They have a track of these descendants and also possess their historical records.  Can you elaborate on this?

A. While there are some who claim that other people, in addition to Noah and his family, survived the flood, this is contrary to what God has told us.  It must be noted that their source for this information is not the Word of God, but man’s writings based on man’s wisdom and words.  Whenever man thinks, reasons and writes from his own understanding, there will be error — often unintentional, but in some cases with intent to deceive.  There are those who desire to disprove God’s Word and there are those who desire to rely on their own understanding to formulate a new insight (not revealed by God) in the Bible.

None of us were present at the time of the flood, and if we had been we would have perished since only eight survived (sorry, I couldn’t resist repeating God’s words, which I believe are true).

God, however, was there.  He’s the Alpha and the Omega, the beginning and the end.  He has always existed and He is omnipresent (always present), omniscient (all knowing) and omnipotent (all powerful).  His Word has been studied by people throughout the centuries and found to be true and trustworthy.  So when God said only eight people went onto the ark, along with the animals, we can believe His Word:

Peter confirmed those aboard the ark in his epistles:

1 Peter 3:20 …in the days of Noah, while the ark was a preparing wherein few, that is, eight souls were saved by water.

2 Peter 2:5  And spared not the old world, but saved Noah the eighth person, a preacher of righteousness, bringing in the flood upon the world of the ungodly;

Those who claim that perhaps others survived will suggest that the “eight souls” are only referring to descendants of Adam, however all people are descendants of Adam and all people have souls, so the word “souls” used in 1 Peter is inclusive of all people.  There is no reason to read-into this something that it does not say.

Additionally, God said that He destroyed all life:

“All flesh” is explicitly inclusive of all life.

It must be noted that those who attempt to say others might have survived the flood are doing so in direct opposition to what God has said.  They use books and sources that are not proven credible and in many case are foundational documents to false religions (Kebra Negast, Saltair na Rann, et.al.)

We are told to be prepared to give answers for the hope that lies within us (1 Peter 3:15) and that includes giving a reasoned answer from God’s Word in response to unbiblical claims and teachings.  When someone presents arguments, such as additional survivors from the Great Flood, by using man’s logic and wisdom to suggest something contrary to what the Bible teaches, it is best to respond with “and God said…” or, as Jesus did, “it is written…

If someone is unwilling to believe God’s words then their problem is not one of information, but rather of transformation.  When we are transformed by the saving grace of Jesus Christ we are given the Holy Spirit who teaches us all truth and directs us in understanding God’s Word.

When confronted with unbiblical questions or teachings, share your biblical understanding and then try to turn the conversation to one of spiritual importance.  An example of turning the conversation might be to say,

“Imagine all those people dying in the flood waters of the flood.   They stepped into eternity without knowing God, for we are told they were wicked and evil (Genesis 6:5). What do you think happened to their souls?  If you were to die today in a natural disaster and stand before your Maker, what do you think would happen to you?”

Open a spiritual conversation and try to determine their understanding of God, or their lack of understanding.  Look for opportunities to turn the conversation from the intellect to the conscience, hoping to soften their heart and open their mind so that the Holy Spirit might bring conviction.

If the person does not know the Lord, they need to be convicted of their sin and understand their need for a Saviour, lest they perish.  Remember, the Lord is “not willing that any should perish, but that all should come to repentance.” (2 Peter 3:9).

If the person is a confused Christian reading secular, unbiblical information, they need conviction that brings about a confession of “…Lord, I believe; help thou mine unbelief.” (Mark 9:24)  They need to believe what God says, not what man says.  We can all be led astray by man’s wisdom, but remember the Lord will seek after those who stray (Matthew 18:12).  And, while there is no condemnation for those who are in Christ (Romans 8:1), there is conviction by the Holy Spirit who will guide us in truth (John 16:8) and teach us all things (John 14:26).

So shall I have an answer for him who reproaches me,

Got Questions? We have Reasons for Hope

Come now, and let us reason together… At Reasons for Hope we invite our community to ask questions.  Each book answers 30 of those questions with answers and reasoning from God’s Word.

All proceeds from products at the store go to support the ministry outreach of Reasons for Hope.

Got Questions? Submit them to questions@reasonsforhopejesus.com