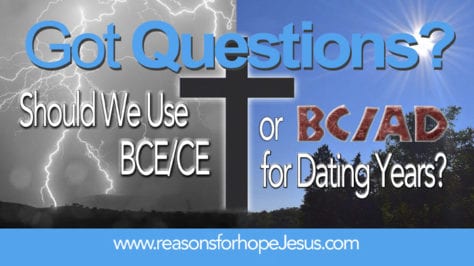 BC/AD and BCE/CE are well recognized as abbreviations used with the number of a year to designate if the year was before or after the birth of Jesus Christ.  Before answering the question about which labeling system should be used, let’s first define each term and understand the origin and history of both.

BC couldn’t be clearer. It means “Before Christ.”  AD means “Anno Domini,” which is a Latin phrase translated “In the Year of the Lord.” AD also clearly denotes the demarcation of time as being at the birth of Jesus.

Just like BC/AD, BCE/CE uses the birth of Jesus as the division point in time when the counting system transitions from “before” to that which comes “after.”

It’s clear that BC/AD has its origin in Christianity.  The use of AD dates back to the sixth century when the Christian monk, Dionysius Exiguus, introduced the phrase “Anno Domini.” It was the intention of Dionysius to mark time since the incarnation of Jesus using the life of Jesus.  Therefore, every year since Jesus’ birth would be designated as AD, meaning “in the year of the Lord.”  This not only acknowledges Jesus’ earthly life, but also His heavenly and eternal reign.  Using BC/AD signifies that time belongs to God and it clearly calls to mind the time when God came to dwell with man and usher in His grand plan of redemption.

The use of CE (Common Era) can be traced back only to the 17th century.  Records suggest it was first used in Europe in 1615 in the writings of Johannes Kepler, which were written in Latin. The term common era was written as vulgaris aerae. (1)  Vulgaris aerae translates to English as Vulgar Era.  In the 1600s, “vulgar” meant ordinary or common. The earliest use of CE by Jewish scholars is found in mid-19th-century writings.  In the 20th century, the use of CE grew in popularity in secular, academic, and scientific writings.

The use of CE as a substitution for AD is, in most cases, intentionally done to de-emphasize Jesus.  The questions should be asked, what is the common era? and, why did the common era begin when it did?  If the time of division is not the birth of Jesus, then what significant event in history delineated the two time periods? There will be no legitimate answer to these questions. The significant event that divides the numbering of years is, of course, the birth of Jesus.  The use of BCE/CE is simply an alternative to using the Christ-proclaiming terms of “Before Christ” and “In the Year of the Lord.”

It should be noted that Orthodox Jews use a consecutive numbering system that begins with creation.  In their counting, 2018 would be the Jewish year 5778, which began at sundown on September 14th.  Jews do not like to use BC/AD because of the obvious references to Jesus as Christ and Lord. Therefore, they use BCE/CE.

Some have suggested that BCE and CE can stand for “Before the Christian Era” and “Christian Era.” That is not a commonly accepted usage of the abbreviations and it is technically incorrect.

The so-called “Christian Era” would not have been marked at the birth of Jesus, but rather at His death.  It wasn’t until after the cross that the New Covenant began and Christianity was “birthed.”  Suggesting that CE can mean “Christian Era,” instead of “Common Era,” is another way to diminish the use of BC and AD by encouraging Christians to use a universal labeling system.  Using BCE/CE, even with the idea that the “C” is for Christian, removes Christ as the focus and makes time the focus. It also removes the work of Jesus.

The title “Christ” in “Before Christ” proclaims Jesus’ anointed work as the promised Messiah of Israel, and the title “Lord,” in “The Year of the Lord,” proclaims His deity as Lord God of all creation–including the creation of time!

Genesis 1:14  Then God said, “Let there be lights in the firmament of the heavens to divide the day from the night; and let them be for signs and seasons, and for days and years.

God is Sovereign Over Time

Ecclesiastes 3:1  To everything there is a season, A time for every purpose under heaven:

Psalm 104:19  He appointed the moon for seasons; The sun knows its going down.

Daniel 2:21  And He changes the times and the seasons; He removes kings and raises up kings; He gives wisdom to the wise And knowledge to those who have understanding.

Acts 1:7  And He said to them, “It is not for you to know times or seasons which the Father has put in His own authority.

Jesus is the Reason for the Seasons (Years)

Isaiah 7:14  Therefore the Lord himself shall give you a sign; Behold, a virgin shall conceive, and bear a son, and shall call his name Immanuel.

Isaiah 9:6  For unto us a child is born, unto us a son is given: and the government shall be upon his shoulder: and his name shall be called Wonderful, Counsellor, The mighty God, The everlasting Father, The Prince of Peace.

The genealogies in Matthew and Luke clearly give us the history and timeline of the years before Jesus’ birth (BC).  The years that followed His birth, denoted with AD proclaim that every year is “the year of our Lord.”  And, while time will change in the eternal state, we will still forever be in the “year (time) of our Lord.”

Should we use BC/AD or BCE/CE for dating years?  As Christians, it should be our joy to use “Before Christ” and “In the Year of Our Lord.”  However, since we are ambassadors for Christ, I suggest that we do not let the use of BCE/CE become divisive.  If someone prefers to use that, turn the discussion to one of spiritual importance by explaining the differences in BC/AD and BCE/CE. Point out that both systems revolve around the birth of Jesus and ask the most important question, “who do you say Jesus is?”  Then be prepared to give the only true answer, “He is the Christ, the Son of the Living God.”

When the fullness of the time had come,
God sent forth His Son.  (Galatians 4:4)