Are We Called to be a Mnason? And what’s a Mnason? 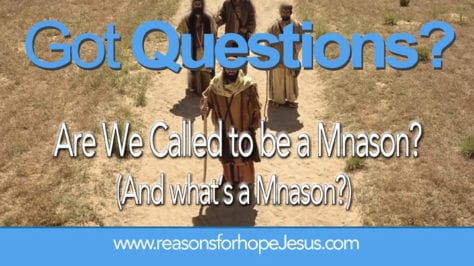 So what’s a Mnason? Actually, the question should be, who was Mnason?

Mnason was a first-century Jew and he’s mentioned in the Bible. However, he’s only mentioned once in Acts 21.

Maybe you’re wondering why you know nothing about him.  The answer is simple — because very little is said about him. However, what is said is important. And we need to know why we should be like this man.

Acts 21:15-17  And after those days we took up our carriages, and went up to Jerusalem.  There went with us also certain of the disciples of Caesarea, and brought with them one Mnason of Cyprus, an old disciple, with whom we should lodge.  And when we were come to Jerusalem, the brethren received us gladly.

In verse 16, we are told that Mnason was “an old disciple” who offered lodging to Paul the apostle, Luke the evangelist, and their companions as they traveled from Caesarea to Jerusalem. We don’t know where the location was, only that somewhere along the way this man offered lodging to the weary evangelists.   However, we do know that this was at the end of Paul’s third missionary journey in AD57  and that the journey from Caesarea to Jerusalem was about 60 to 70 miles, which would have taken at least two days.

From the text, we learn that Mnason not only provided lodging for the group of disciples but also accompanied them to Jerusalem: [Paul, Luke, and others] ”went up to Jerusalem”….”and brought with them one Mnason of Cyprus…”

Summary of What We Know About Mnason

What We Can Learn from Mnason

John 13:34-35  A new commandment I give unto you, That you love one another; as I have loved you, that you also love one another.  By this shall all men know that ye are my disciples, if you have love one to another.

Gal 6:10  As we have therefore opportunity, let us do good unto all men, especially unto them who are of the household of faith.